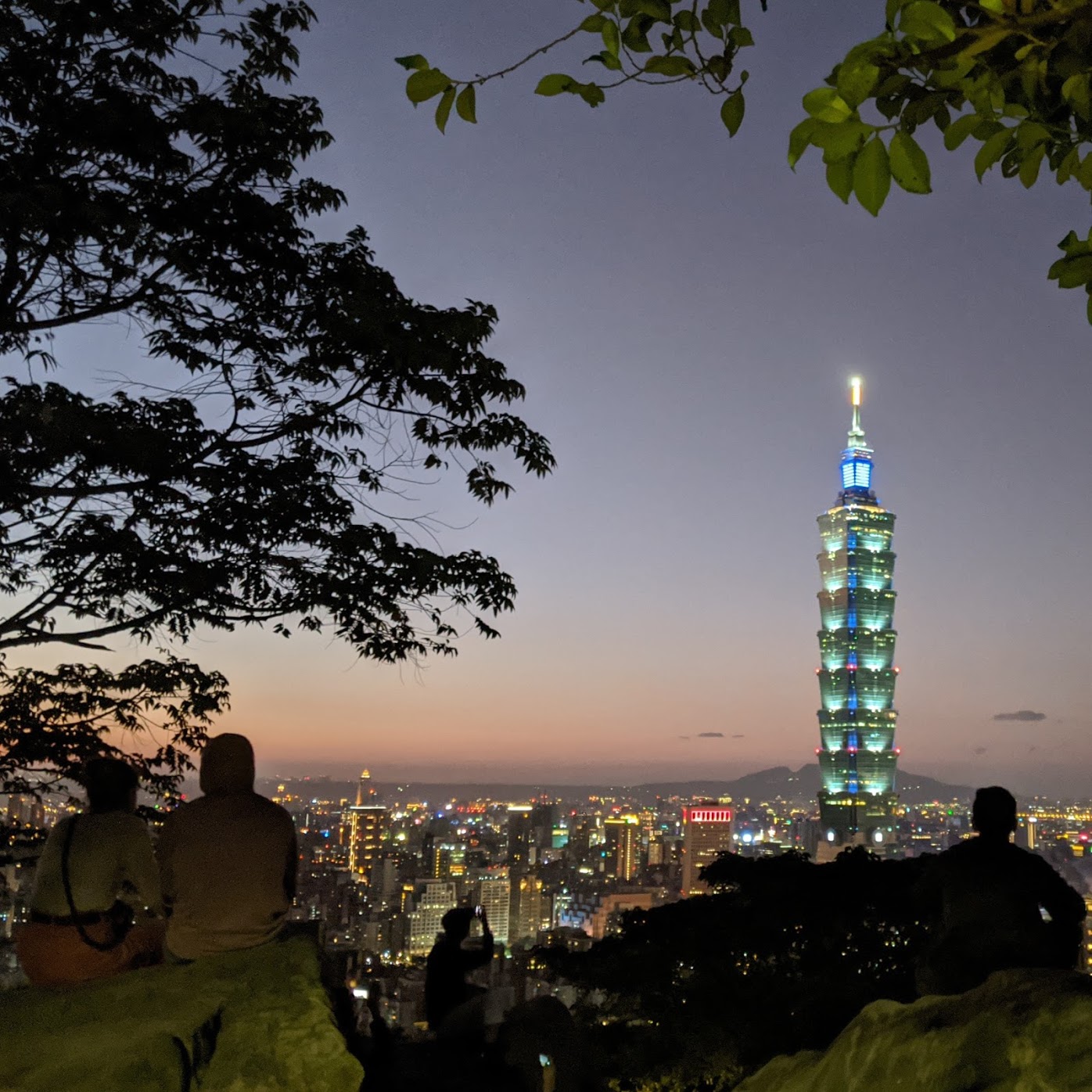 Taiwan is such an underrated country. When one plans for a trip to East Asia, Taiwan always seems to slip under the radar and is often considered as an afterthought, especially when put side by side with its regional neighbors Japan and Korea.

With the visa restriction to Taiwan lifted for Filipinos, I thought to visit Taiwan for a short vacation. I took a 9-day trip to North and Central Taiwan last December and visited four areas: Taipei, Alishan, Taichung, and Chiayi.

My takeaway from the trip: Taiwan is a very pleasant surprise. I think it’s a place that has something for everyone. For the city lovers, it has modern cities and fantastic night markets. For the nature dwellers, it has the most beautiful canyons, mountains and lakes.

In this post, I’ll focus on Taipei, the capital city. Though one can spend the whole vacation in Taipei City just exploring the scrumptious night markets, unique industrial parks and many museums, there’s a lot of daytrips one can take that are just an hour or two from the city. Because of the fantastic metro system, everything is convenient and accessible!

Five things to do in and around Taiwan’s capital.

Chill Out at Taipei’s Green Spaces

The primary reason why I took a vacation was to relax, as I conveniently placed it a few weeks after my stressful stay in Singapore. What better way to relax than to chill at the park?

As I had limited time in Taipei, I was only able to visit two parks and one nature trail: the Chiang Kai Shek Memorial Hall Park, Daan Park, and the Elephant Mountain.

The Chiang Kai Shek (CKS) Memorial Hall is one of the most famous tourist attractions in Taipei. Built as a monument to the former leader of the Republic of China, the CKS Memorial Hall is also host to a beautiful courtyard and park where locals do their afternoon tai chi and little kids feed the ducks and fish living on the park pond. 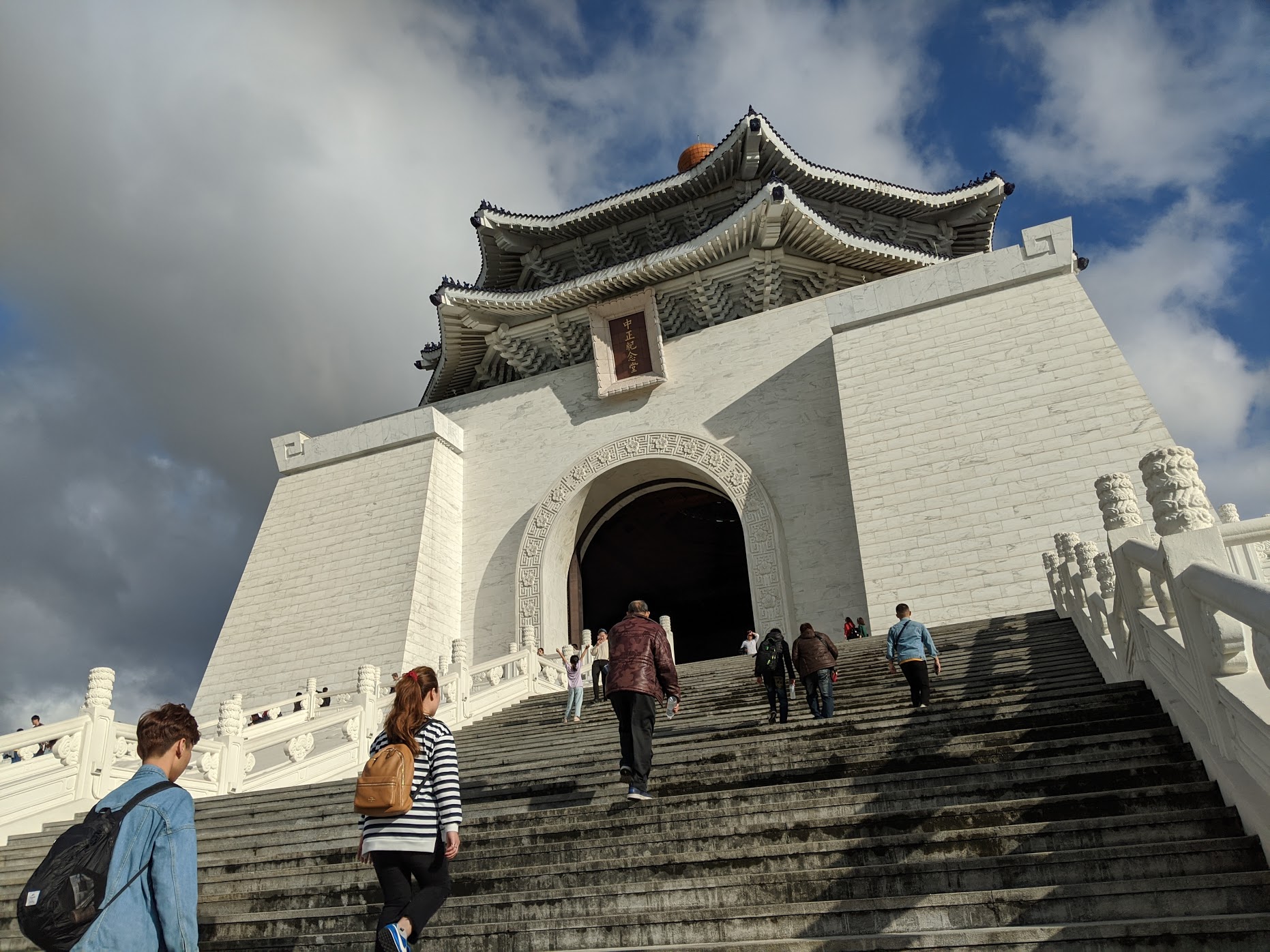 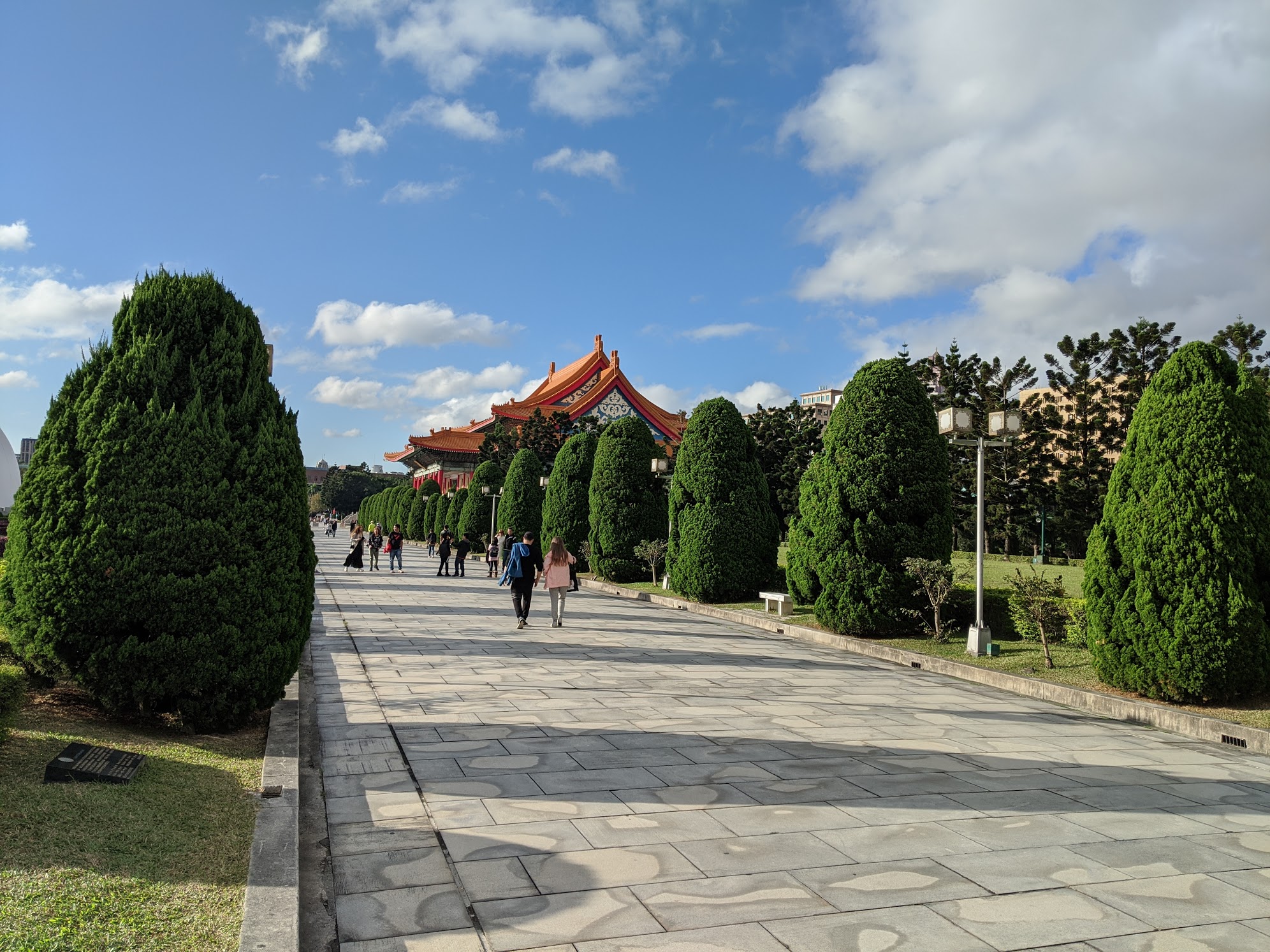 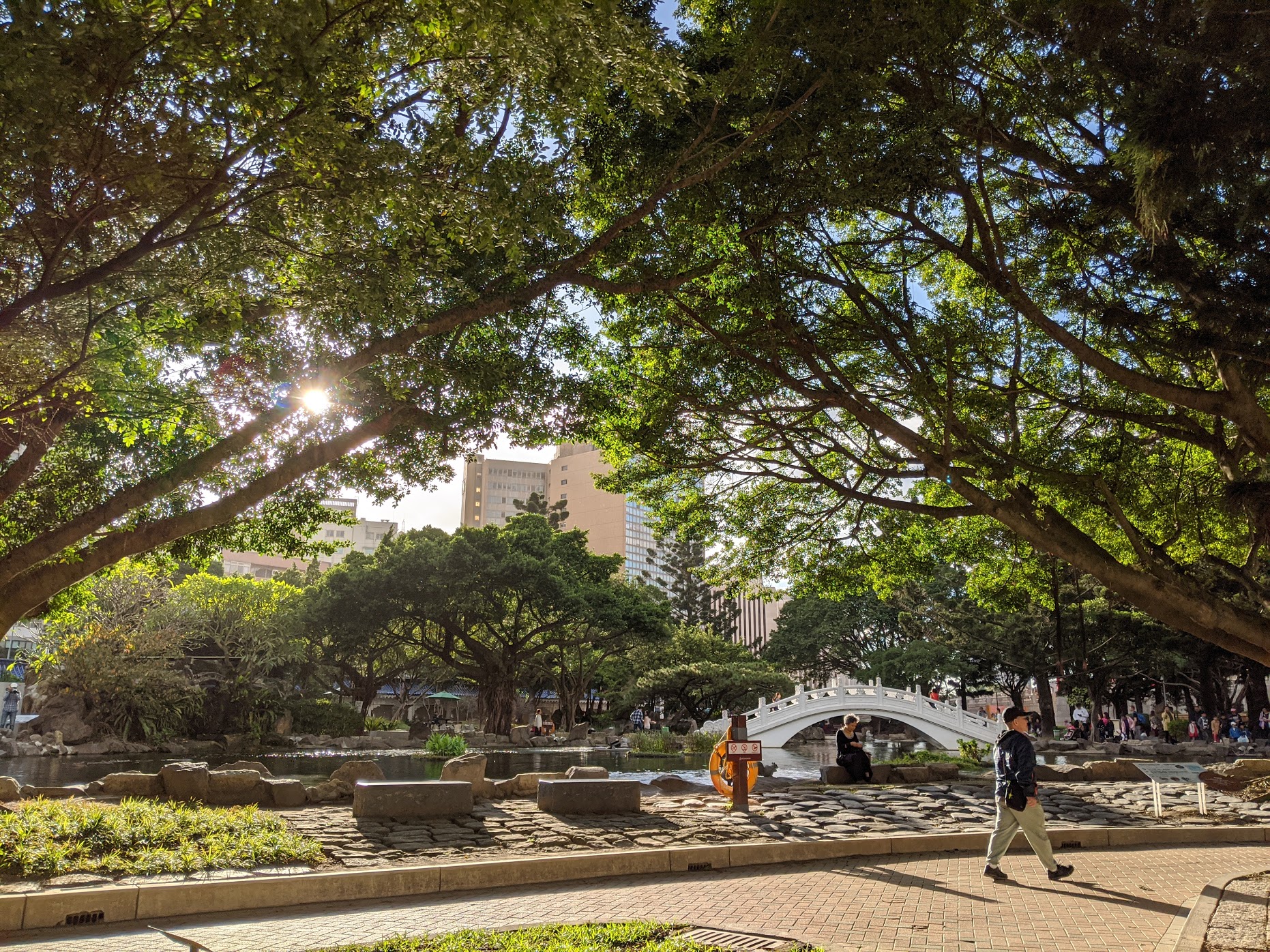 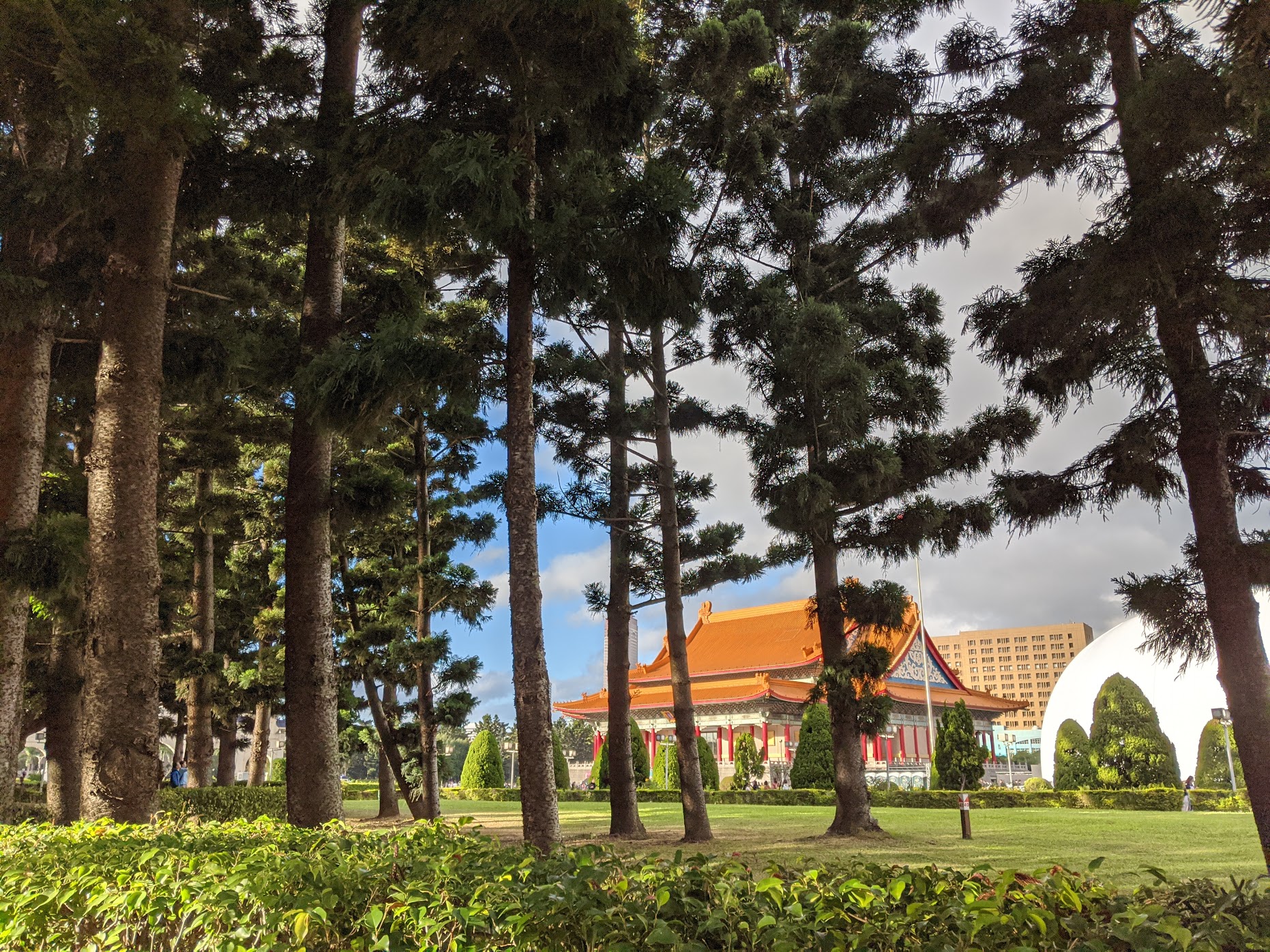 I spent a great deal of time in the CKS Memorial Hall Park just sitting and people-watching. I arrived late afternoon and the sun was just nearing to set. As I was in Taiwan around December, the winter chill was also present. A perfect way to spend an afternoon.

I also spent a morning at one of Taipei’s many parks: Daan Park. Regrettably, I did not take any pictures at the park. I bought lunch from a nearby 7-11 and took it with me to the park. I sat at the edge of the lake and ate my meal. After the meal I just laid down on the grass and allowed time to pass by. There were a lot of people at the park that day. It was a weekend, so that’s to be expected.

I just feel a bit envious of Taipei because they have such great parks. Little green spaces spread across the concrete jungle make all the difference in liveability. When is Manila going to catch up?

The last green space I went to in Taipei is the Elephant Mountain, which is said to be the best viewpoint for the Taipei 101. 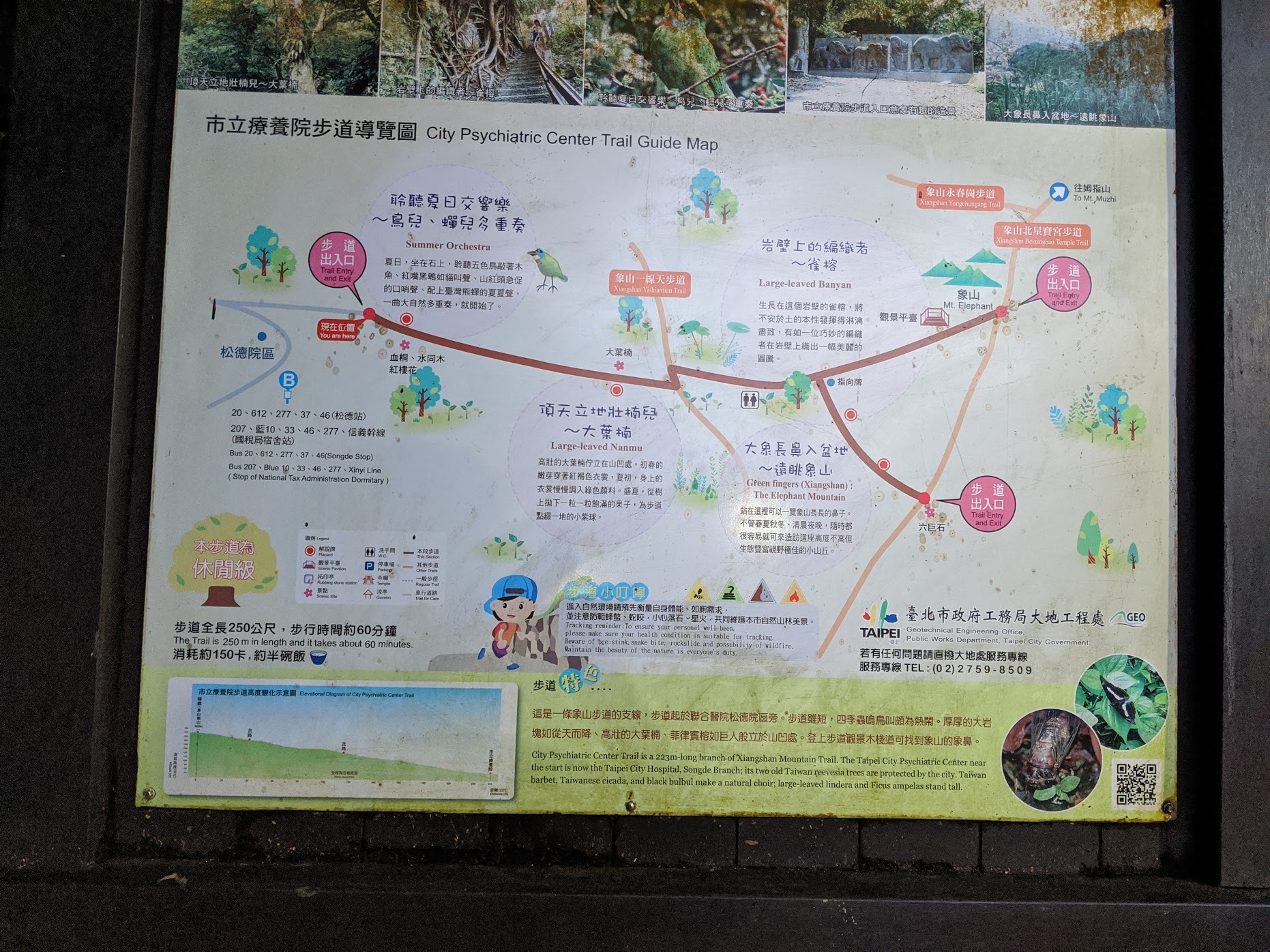 Though the trail wasn’t that difficult, I was a bit unprepared as I already had a tiring day in Taipei before ascending the trail. It took around an hour or so to arrive at the viewpoint. The steps were a bit steep, so be cautious when ascending and descending the trail at night! 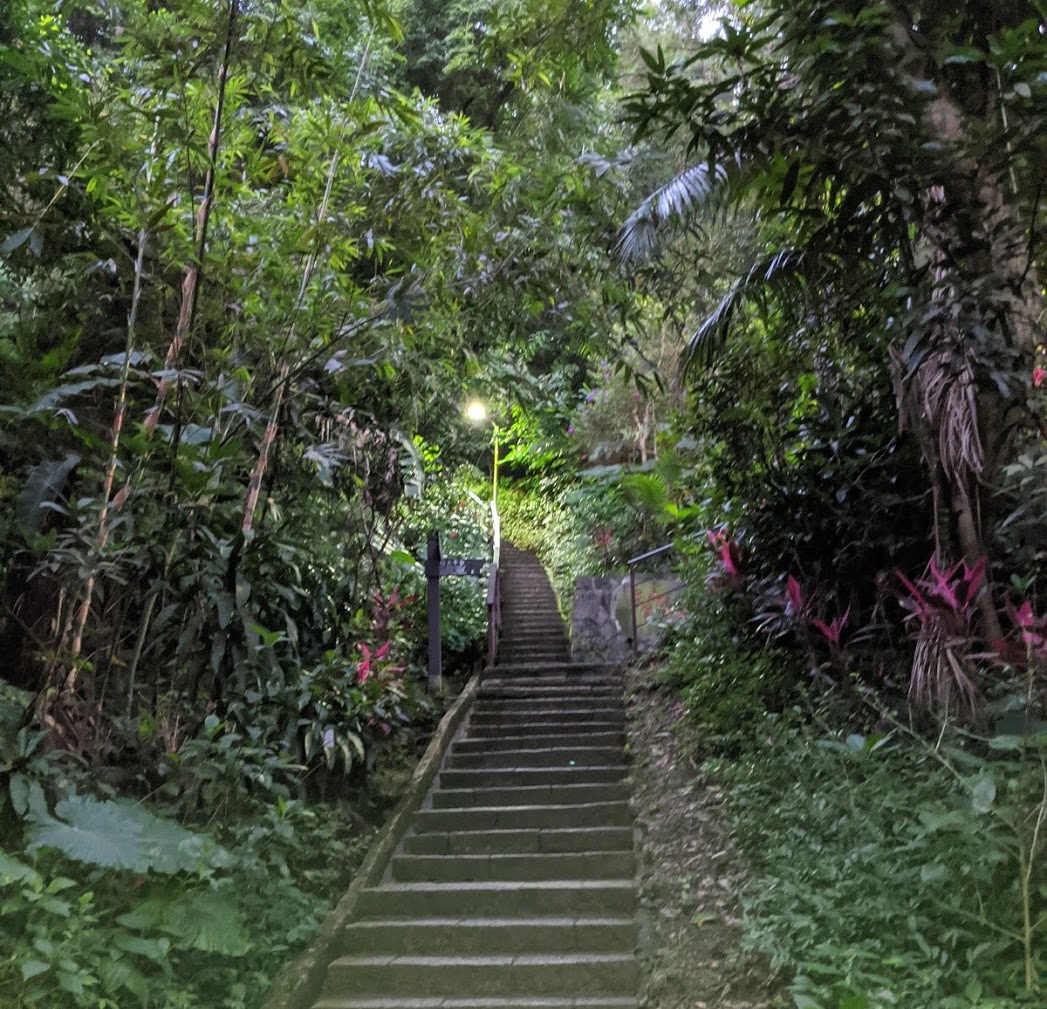 However, the view is definitely worth the trek. Just be aware that the Elephant Mountain is a famous tourist area and it might be crowded at the top. Lots of competitors to get that perfect shot of Taipei 101.

Pig out at Night Markets

Taiwan is just crazy for street food. I don’t know the official stats, but Taipei must be the city with the highest density of night markets in the world. Every district has its own night market, with each one having its own specialty.

I visited two night markets, the densely crowded Ximending Night Market and the more lowkey Ningxia Night Market (which is near the hostel I stayed at). 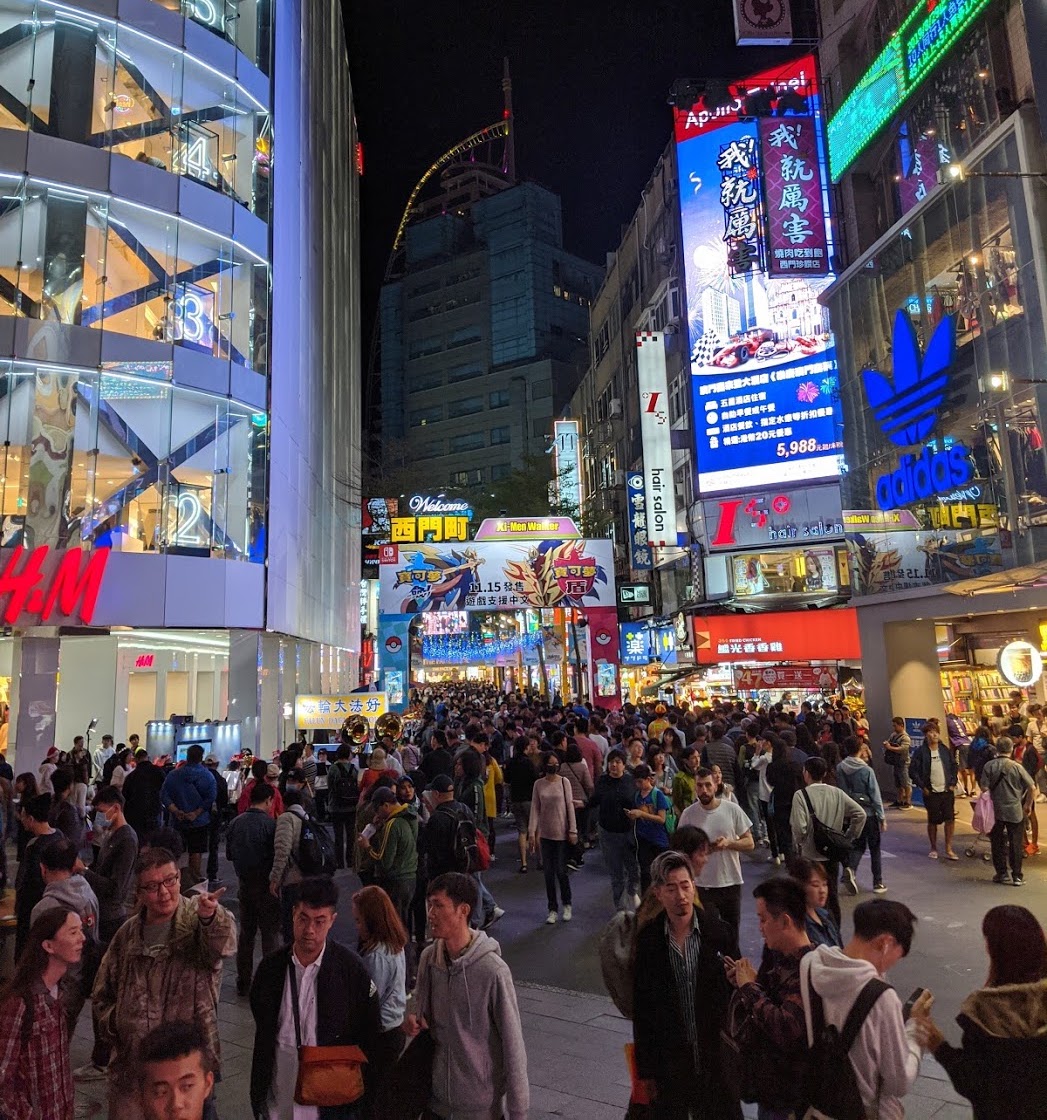 Ximending isn’t just a night market but an actual shopping district. It hosts not just food stalls, but also clothes, souvenirs, and artwork. Since there are so many people in Ximending, it’s not surprising to see that many buskers have also set up booths along the street.

I also had a knife massage at Light Project Ximending. You read that right: knife massage. Instead of using her hands, the masseuse used two blunt butcher knives to apply pressure on my back. Just for visuals, the motion of the knives was somewhat similar to the motion of lightly mincing onions. It was a bit on the expensive side, but I was happy to try it at least once. 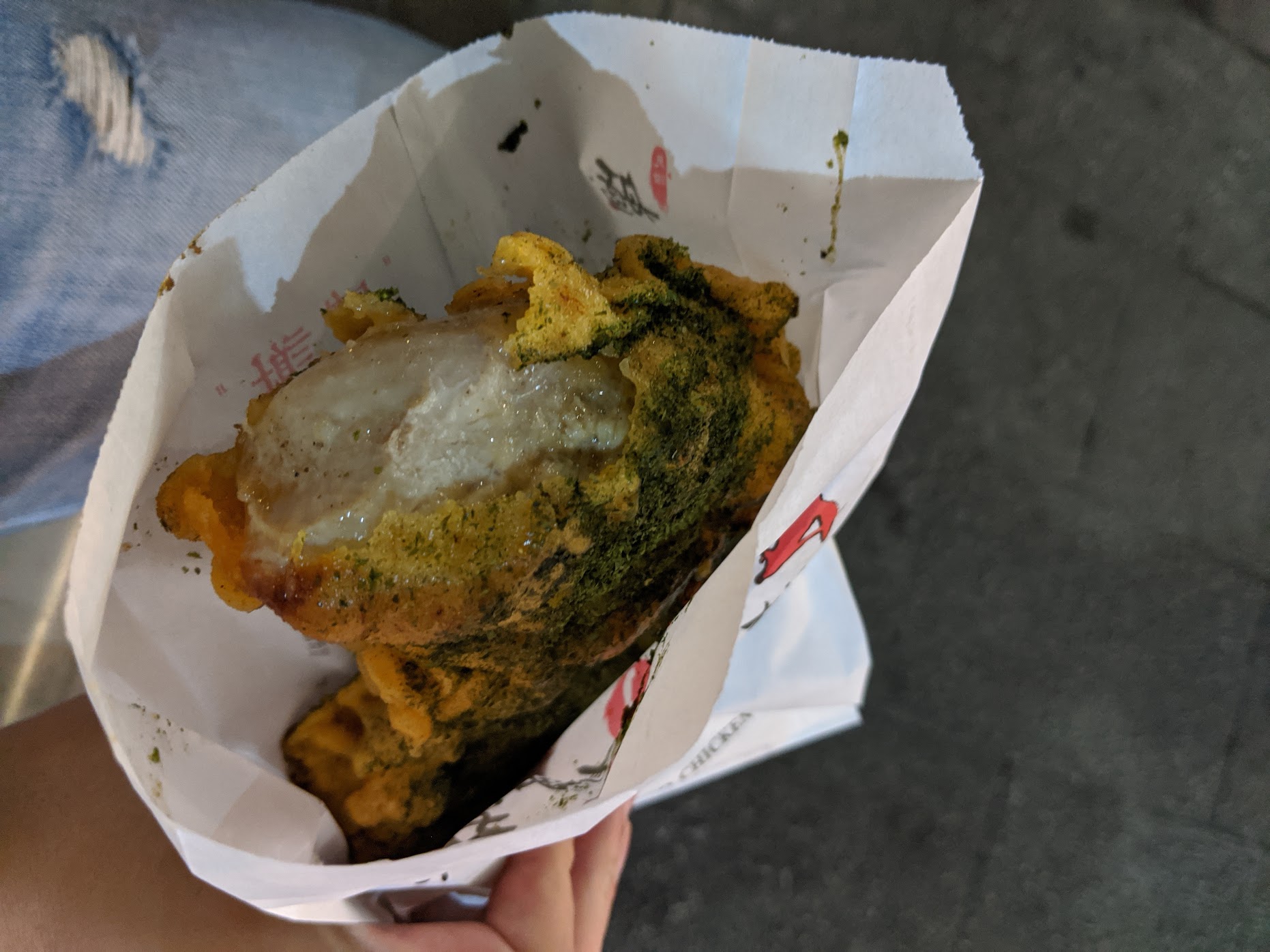 Taiwan’s famous for its jumbo fried chicken, and so I knew that I had to have one. But my favorite find in Ximending is the cheesy lobster, which was just amazing. 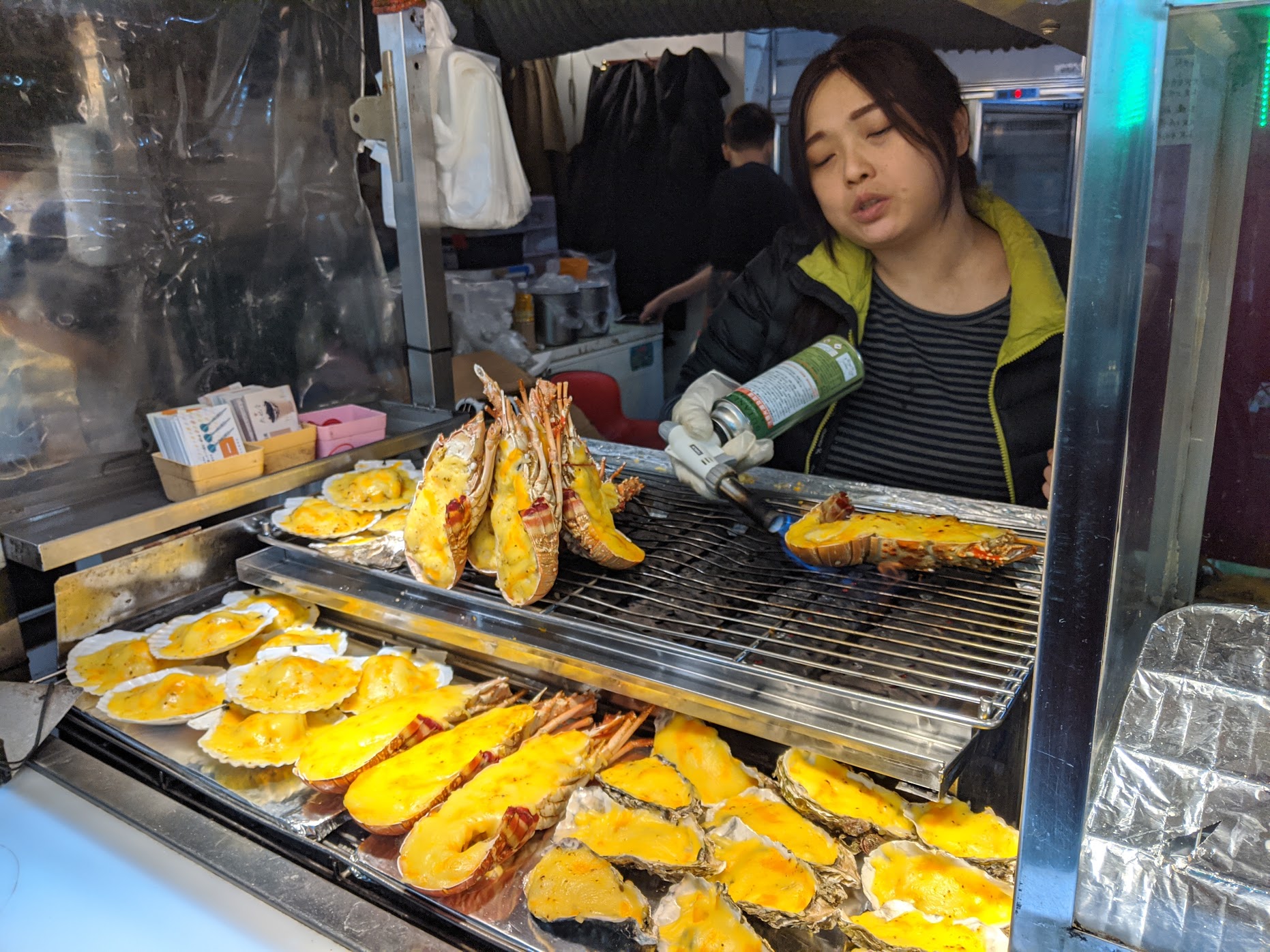 At Ningxia, the must-try dish is the Michellin-recognized Liu Yu Zai deep fried taro balls with salted egg 劉芋仔芋餅. The queue to the stall was long, but definitely worth the wait! 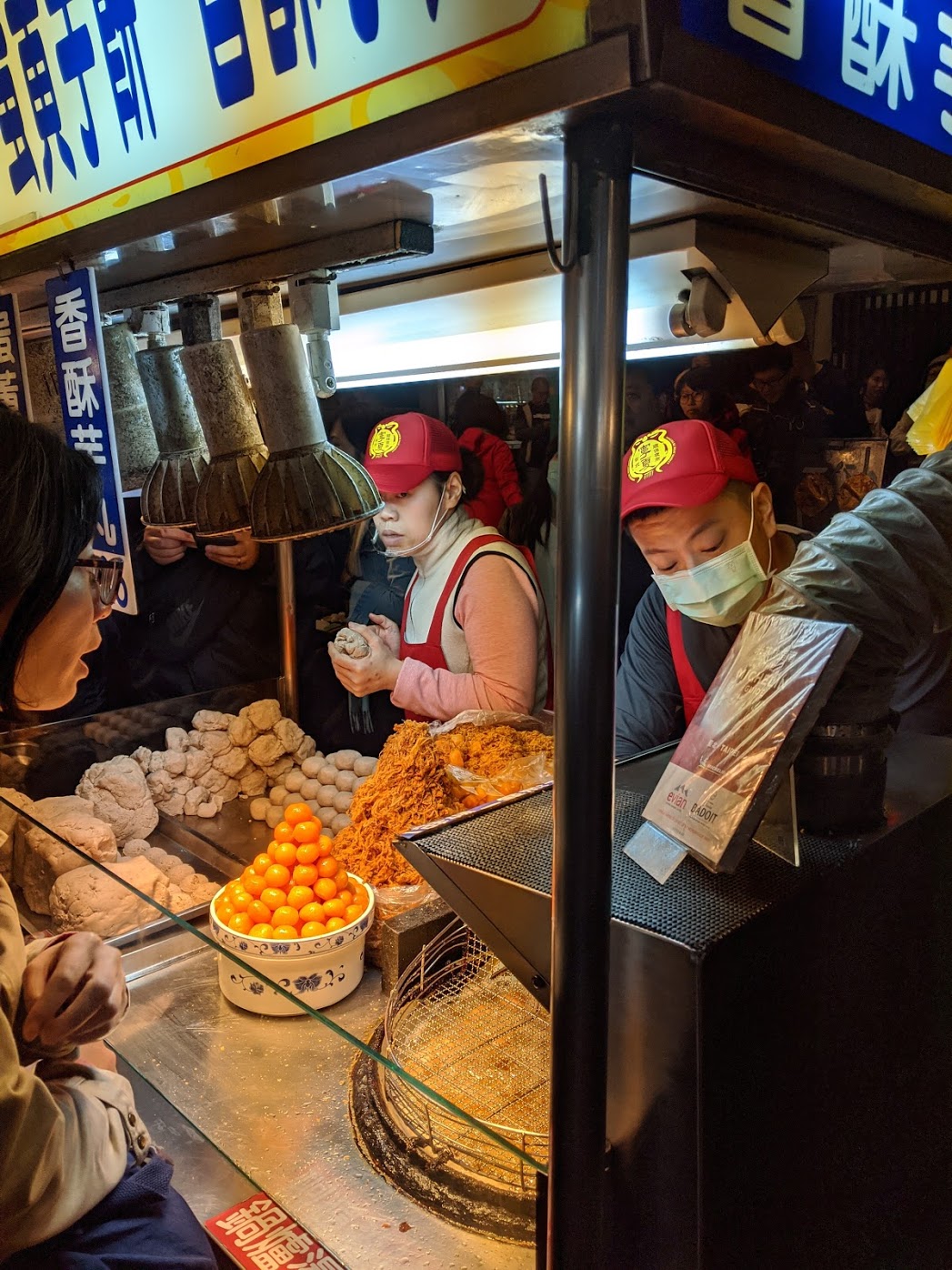 Also, don’t forget to grab Taiwan’s unofficial national dish, beef noodles, while in Taipei. I had a bowl at a famous joint, Lin Dong Fang Beef Noodles 林東芳牛肉麵, where I had to queue for about an hour. It was very good, with the thickest and most umami-filled slabs of beef I’ve ever seen in a bowl of noodles. 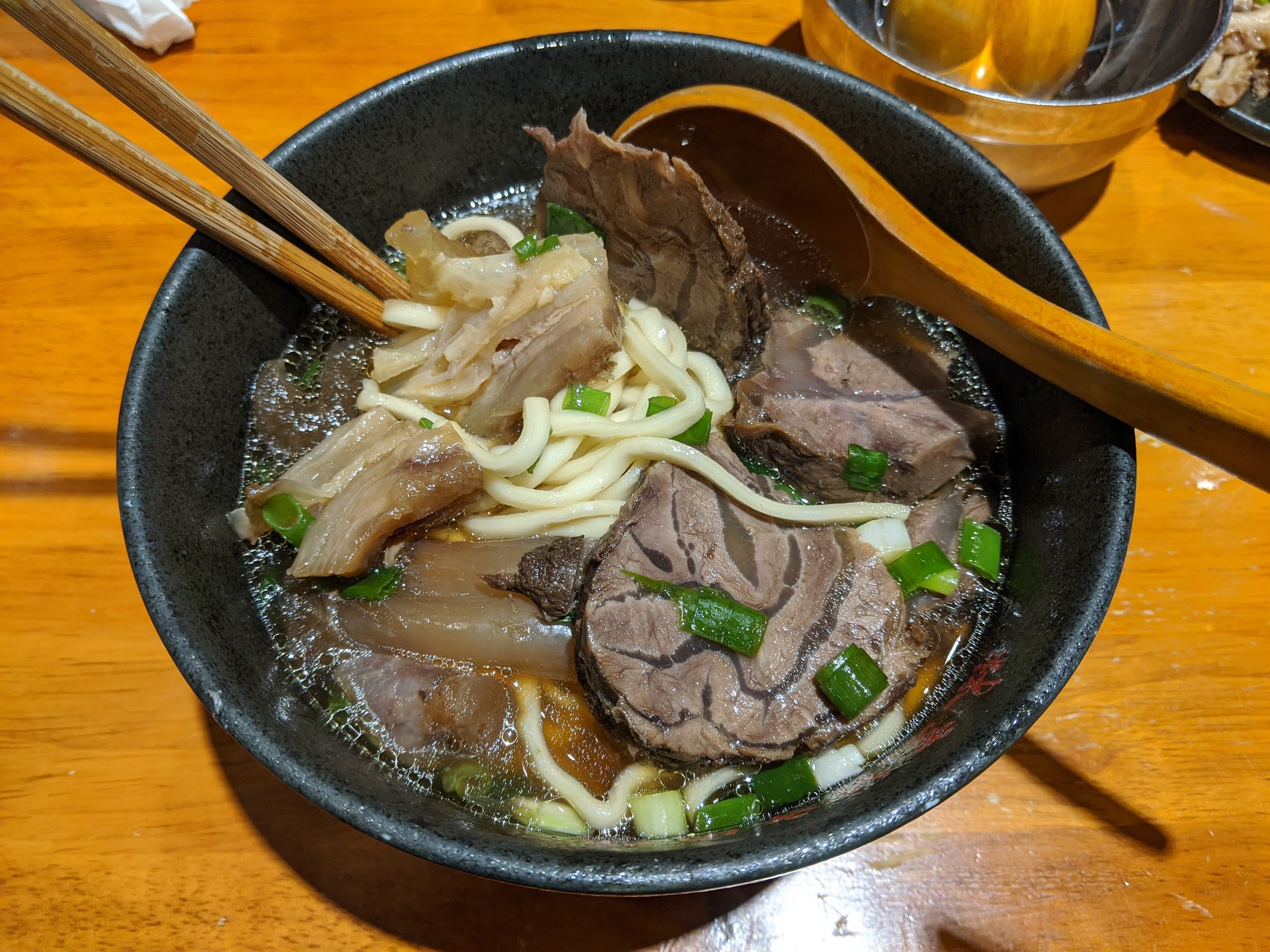 Soak in a Hot Spring in Beitou 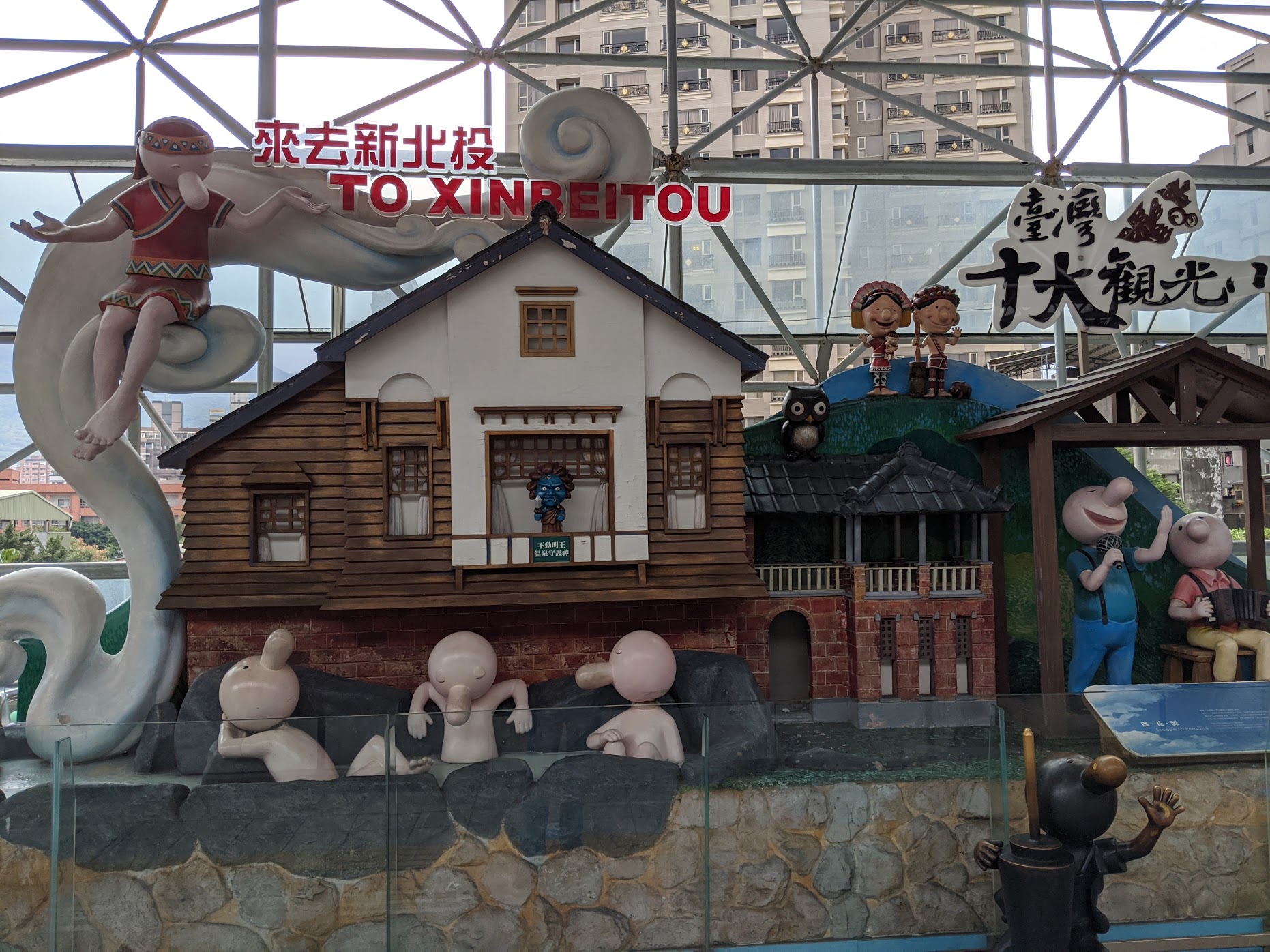 For a more local experience, head up north by MRT to Beitou. A district known for its many hot springs and green spaces, Beitou has a small-town feel that’s missing in the more cosmopolitan Taipei. 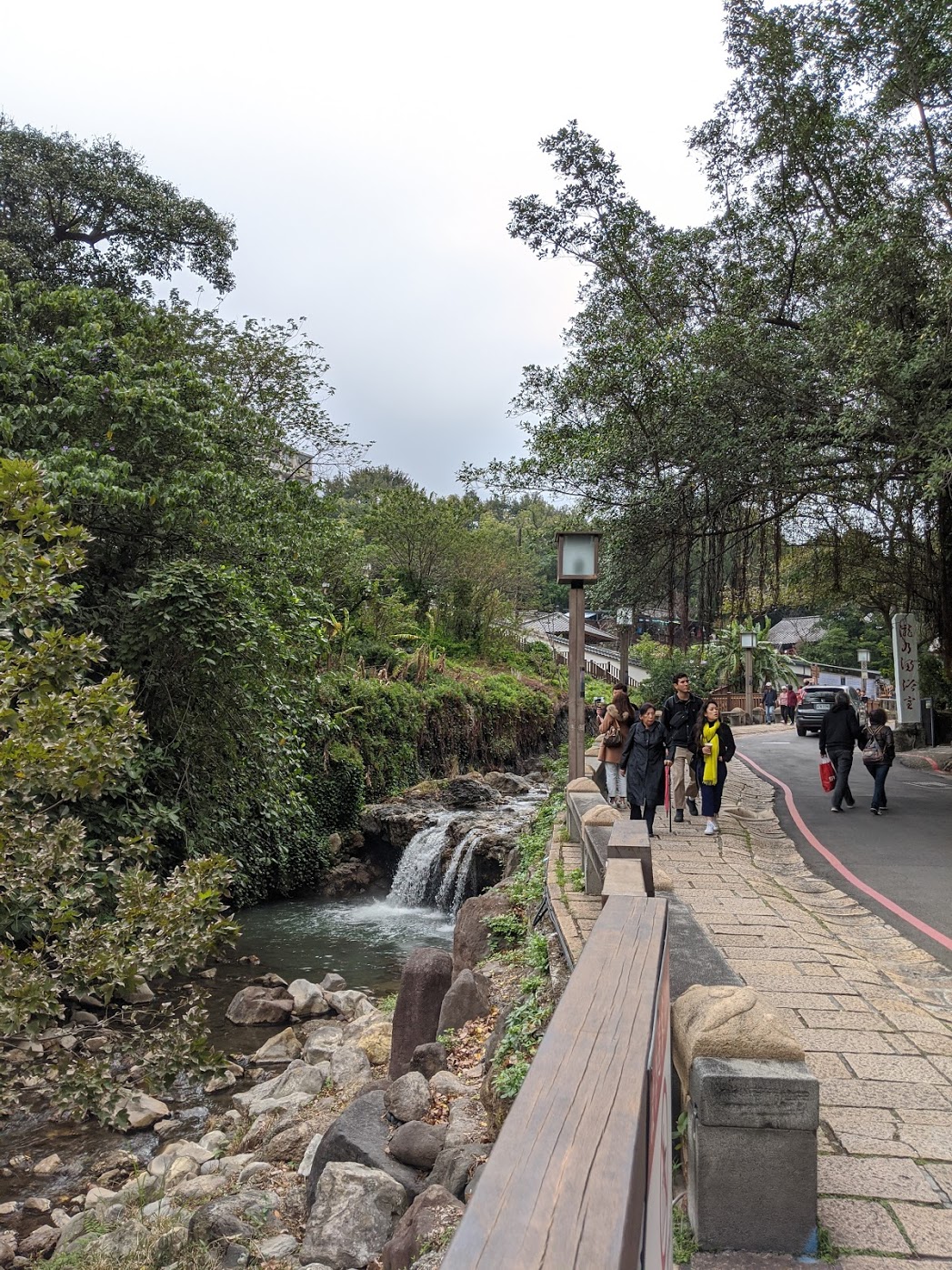 Just walking around the old town is an experience, as there are numerous streams and small waterfalls adjacent to the sidewalk. The Beitou area also hosts a fantastic park that’s just perfect for relaxing. But Beitou is known for its hot springs, so I’d be remiss if I didn’t try to soak in one. 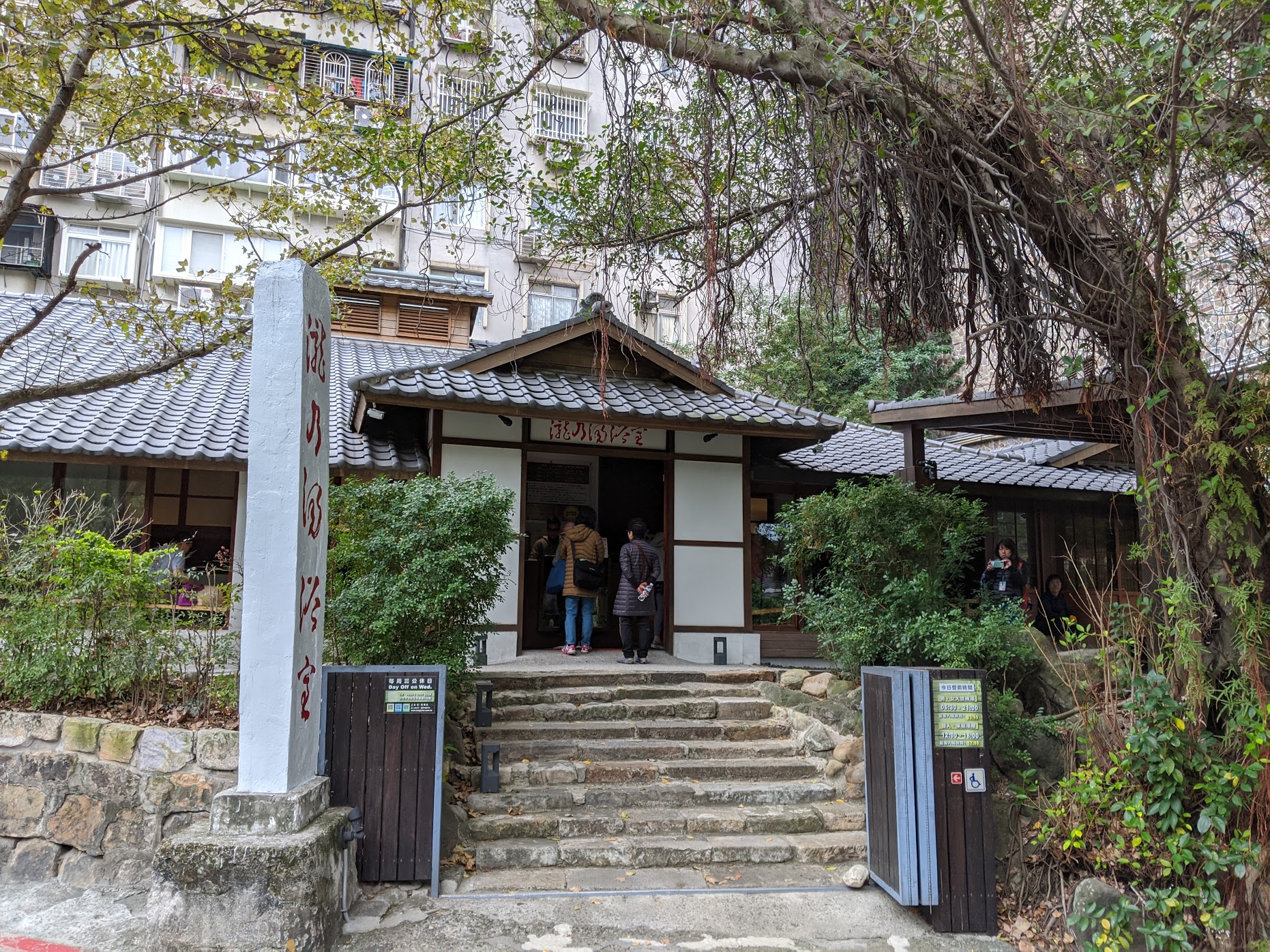 Without booking an overnight stay at one of the local hot spring hotels, my only option was to soak in a public hot spring. There were very limited options, so I settled on the one with the most history: Long Nai Tang Hot Springs, the oldest still-operational public bath in Beitou.

I must admit, it was a bit awkward to bathe in Long Nai Tang as

Though I already had some experience with public baths (Kurama Onsen in Kyoto), it was quite awkward as it felt like everyone at the bath knew each other and I was a bit out of place. A cultural experience, nonetheless, as it seemed like a very local thing to do. 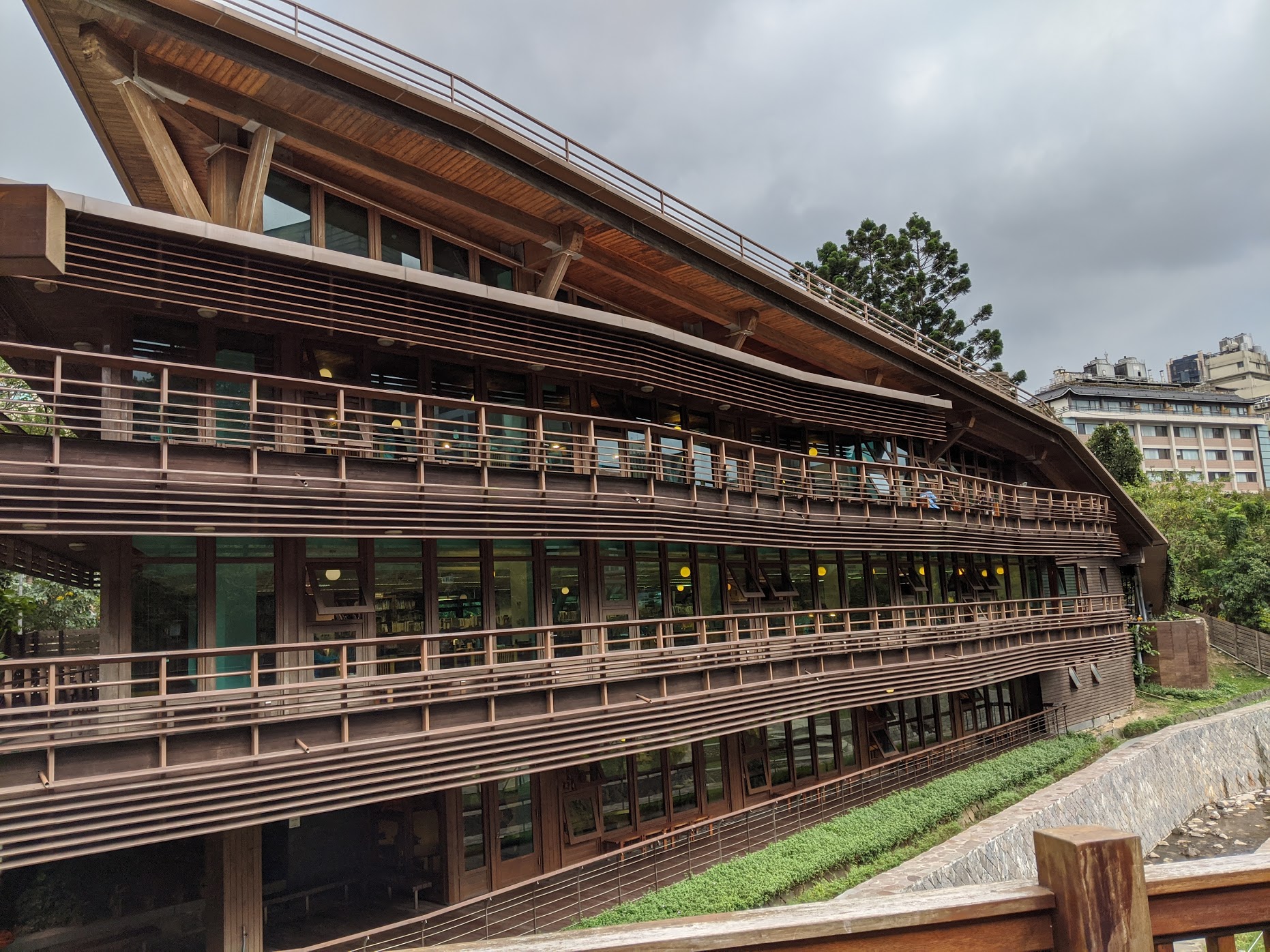 Before going back to the city, don’t forget to swing by the beautiful Beitou Public Library. The building looks like a futuristic cabin in the woods, as it is mostly wooden with big glass windows. It’s located at the Beitou Park and is the perfect place to chill after soaking in the public bath.

Get Spirited Away in Jiufen 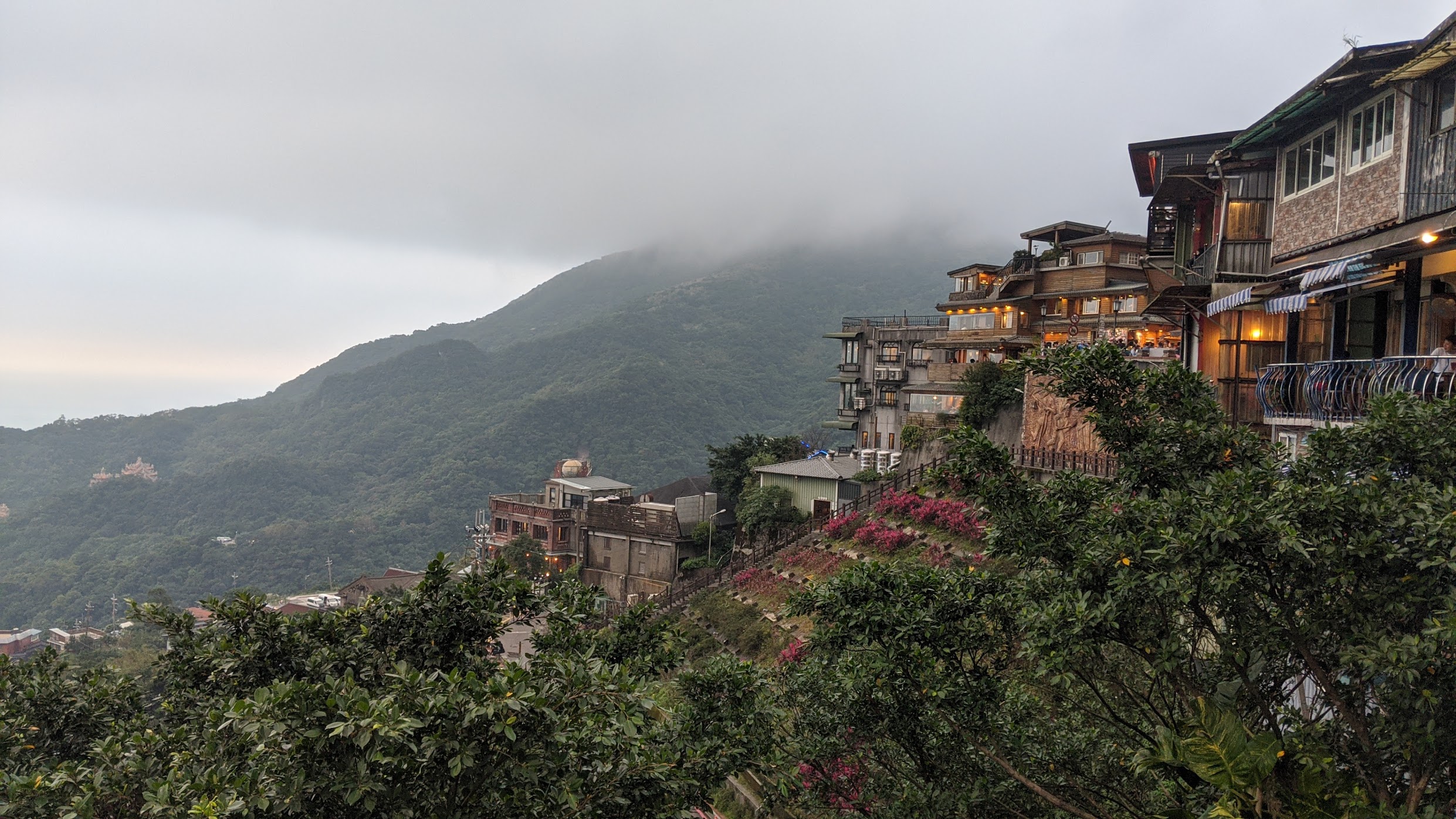 Jiufen is one of the most popular daytrips from Taipei, and with good reason. The red lanterns, cobbled streets, and traditional architecture all contribute to make the city a real-life Spirited Away. Jiufen is a mountain town by the sea that pops up like a storybook at night. 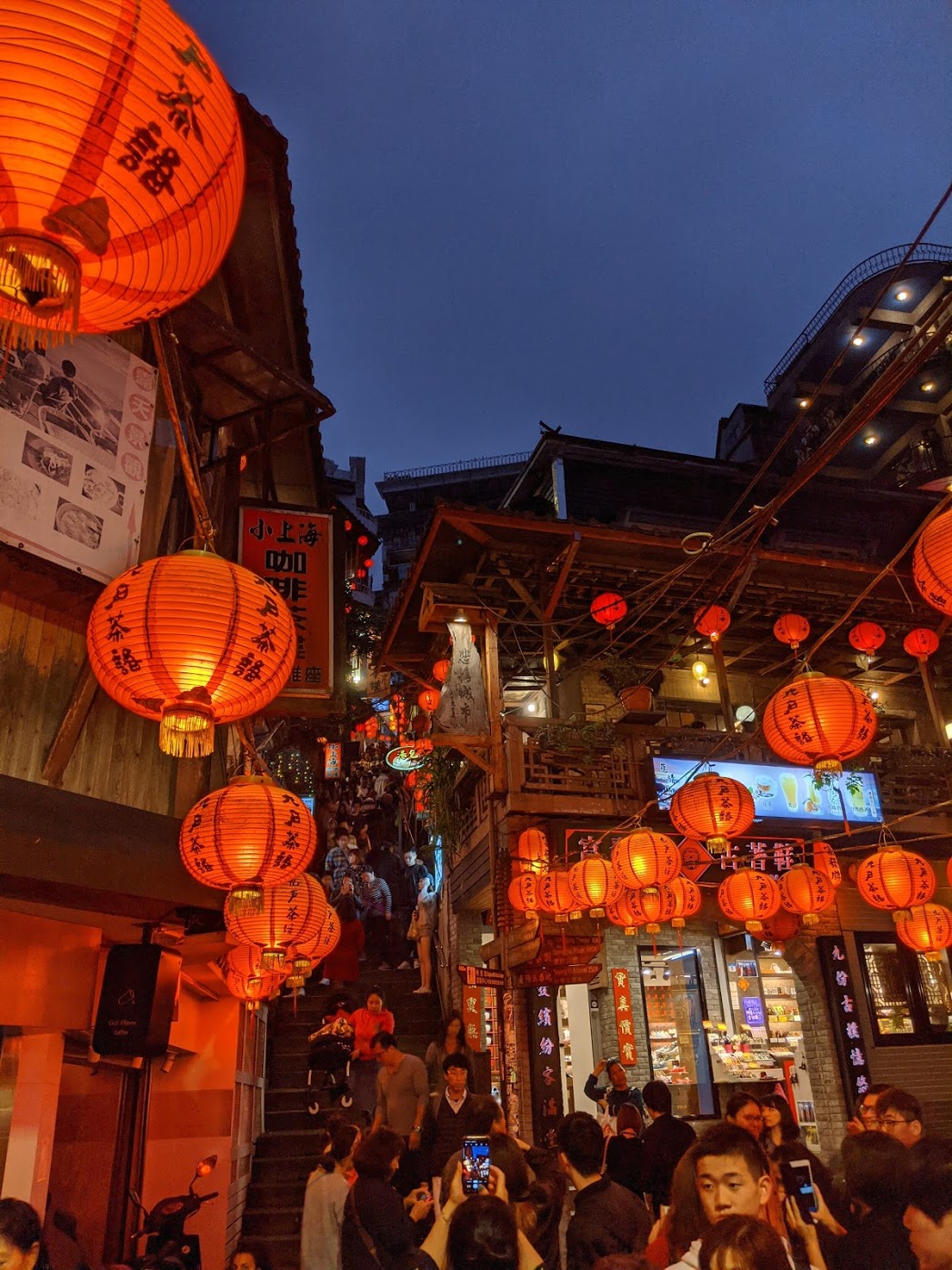 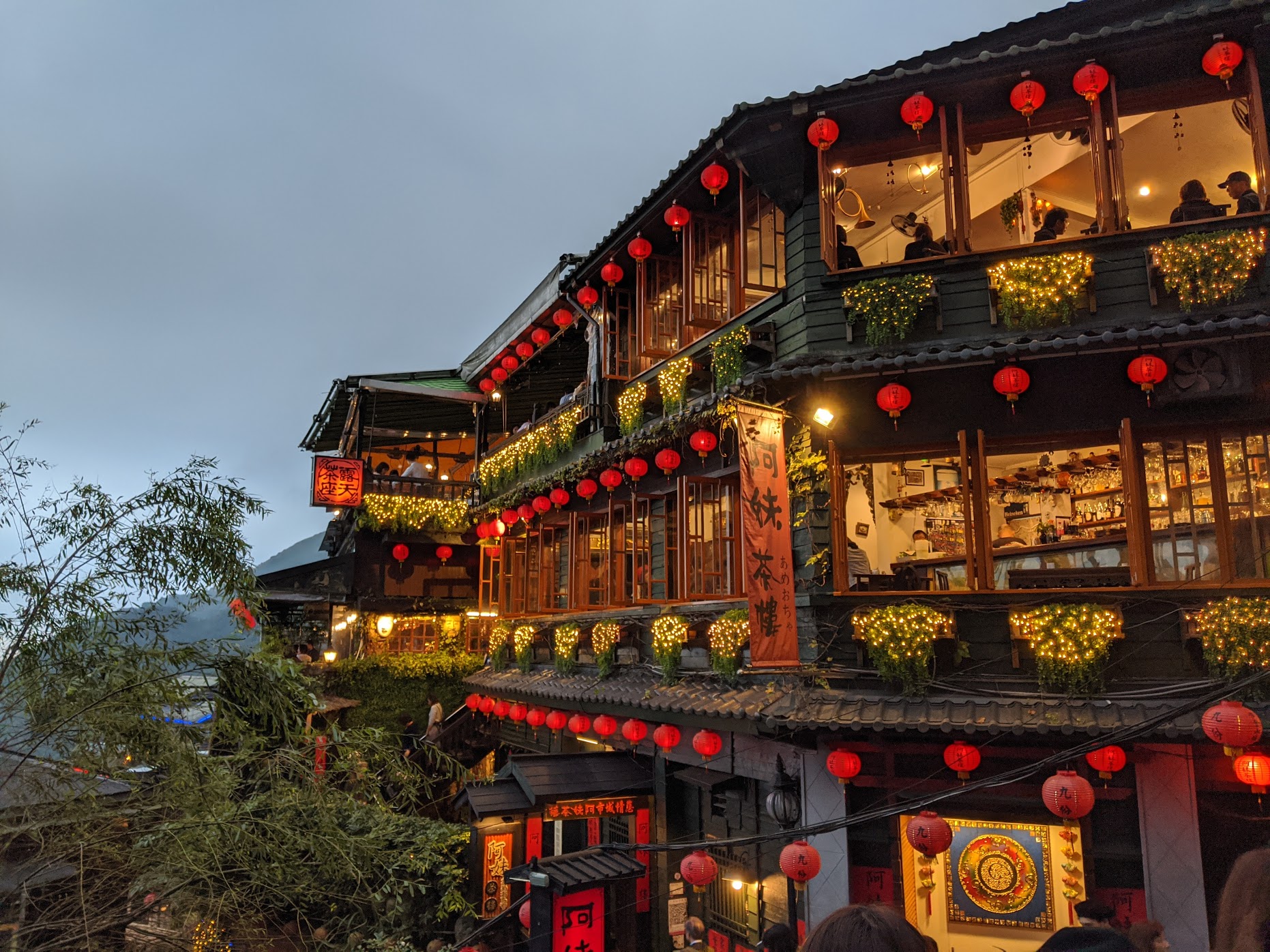 Not a lot of activities in Jiufen apart from walking the streets and admiring the old architecture and fantastic view of the sea. Lots of teahouses in the area as well, if you are interested. Don’t forget to check out A-Zhu Peanut Ice Cream Roll 九份阿珠雪在燒 for a unique and interesting dessert. 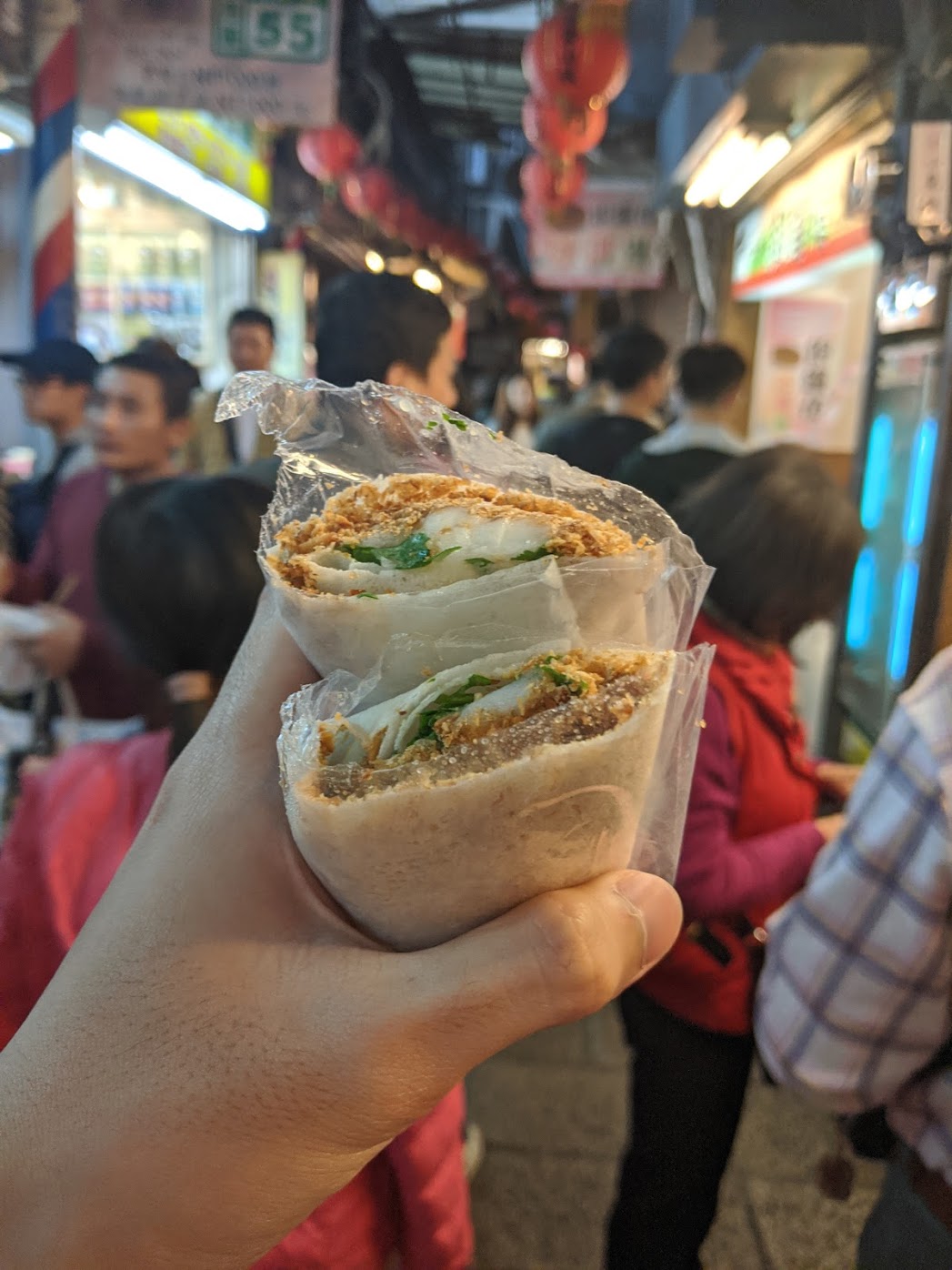 Ride the Gondola to Maokong

For all you tea lovers out there, Maokong is a must-see place. It used to be the biggest tea-growing area in Taipei, but now it’s mostly known for its many scenic teahouses that offer a nice view of Taipei at night. It’s also very known for the gondola that you have to ride to get there! 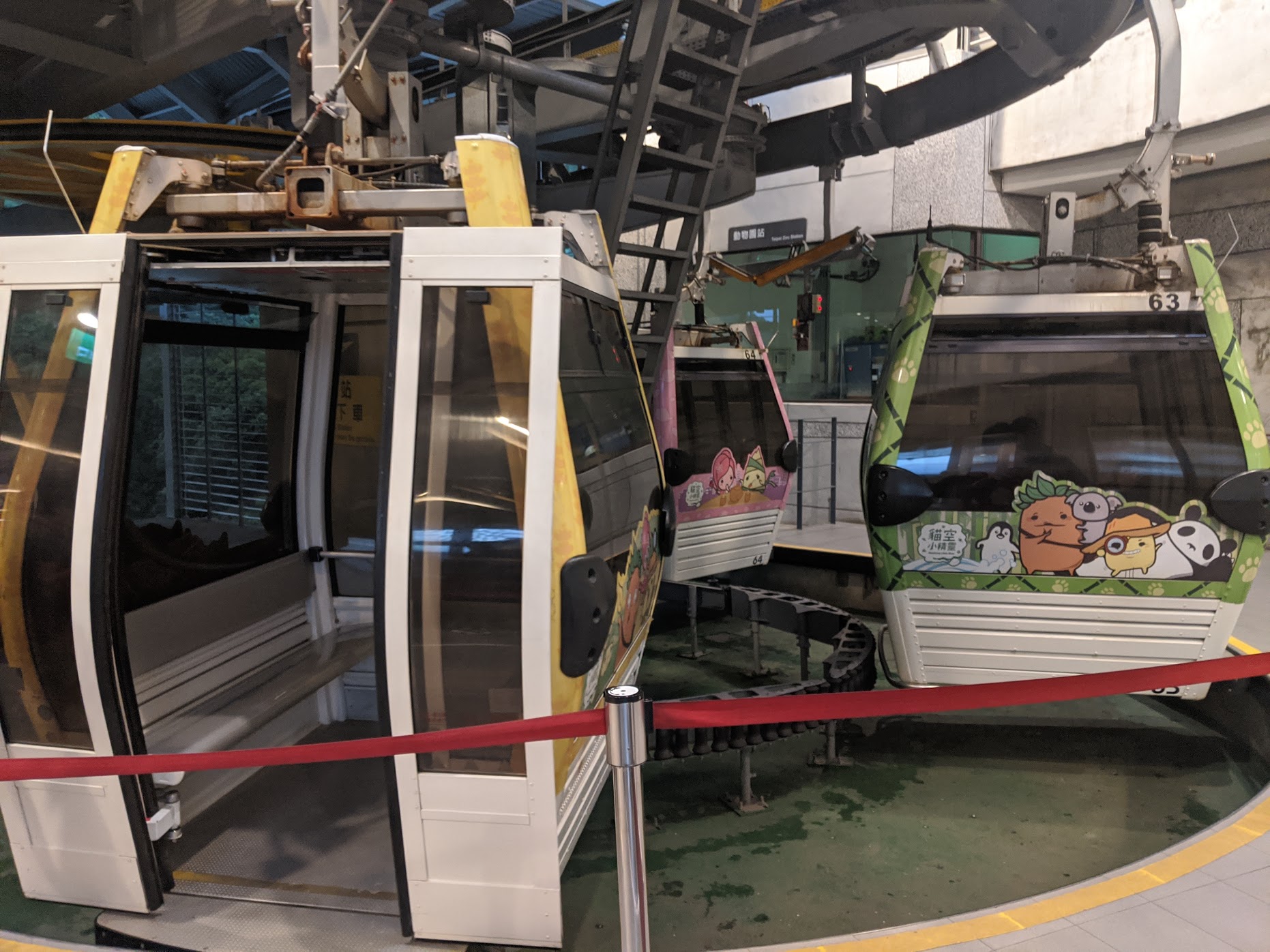 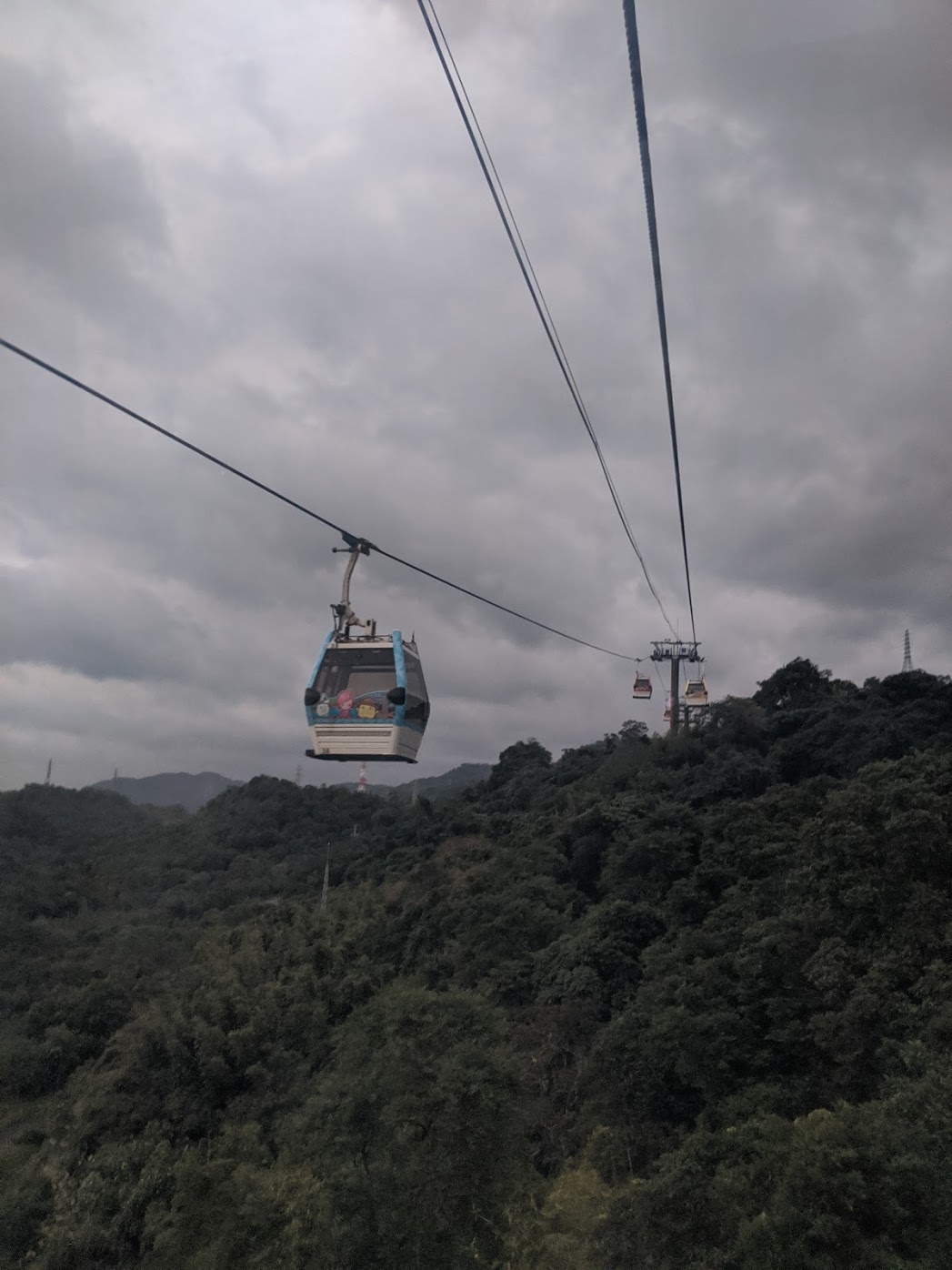 I went to Maokong to get some tea as souvenir and admire the night view. It was a bit chilly on top of the mountain. To add to the chill, I bought some Maokong Oolong ice cream from one of the local shops. Delicious. 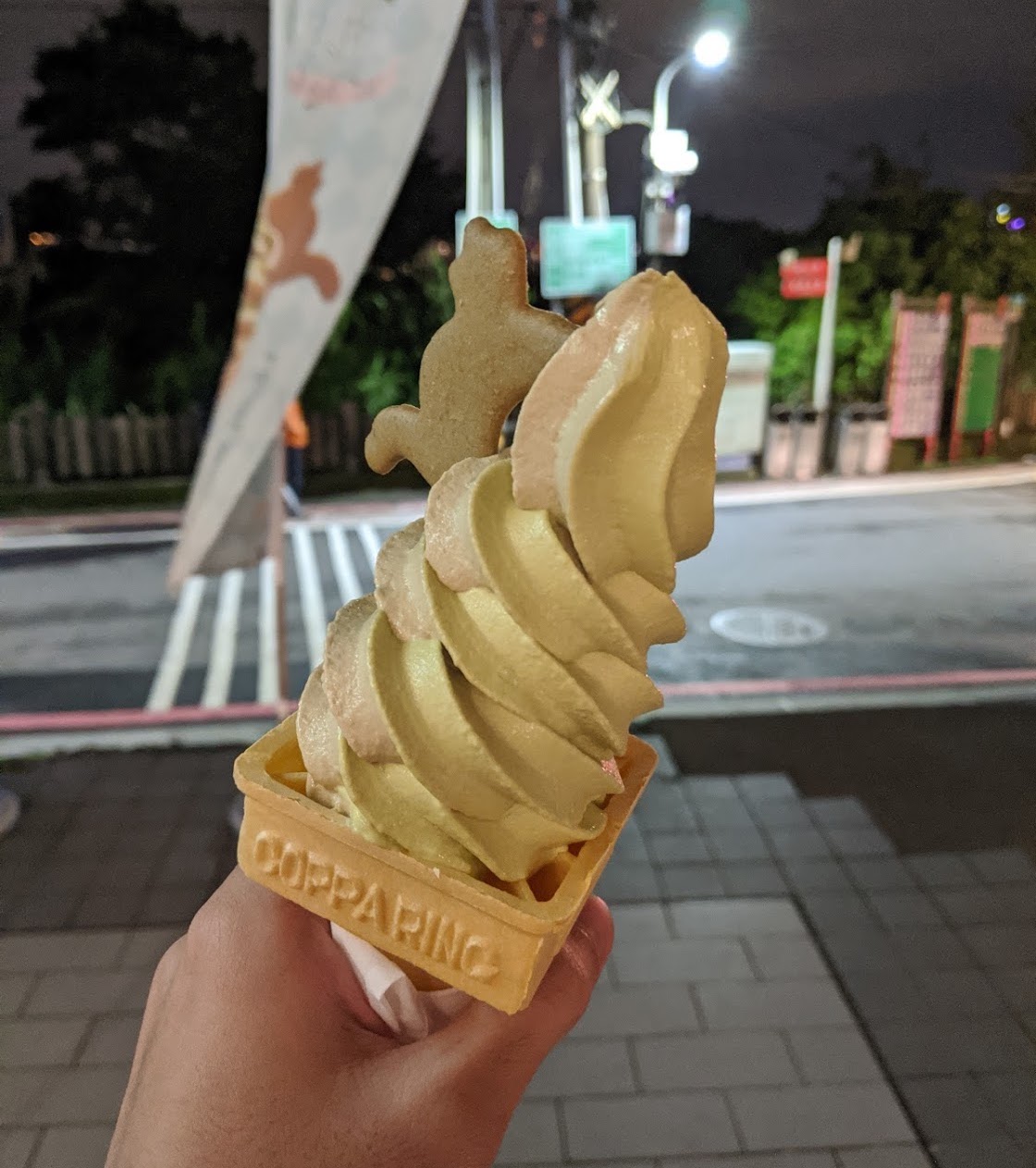