Varanasi: The holy ghats and the Ganges 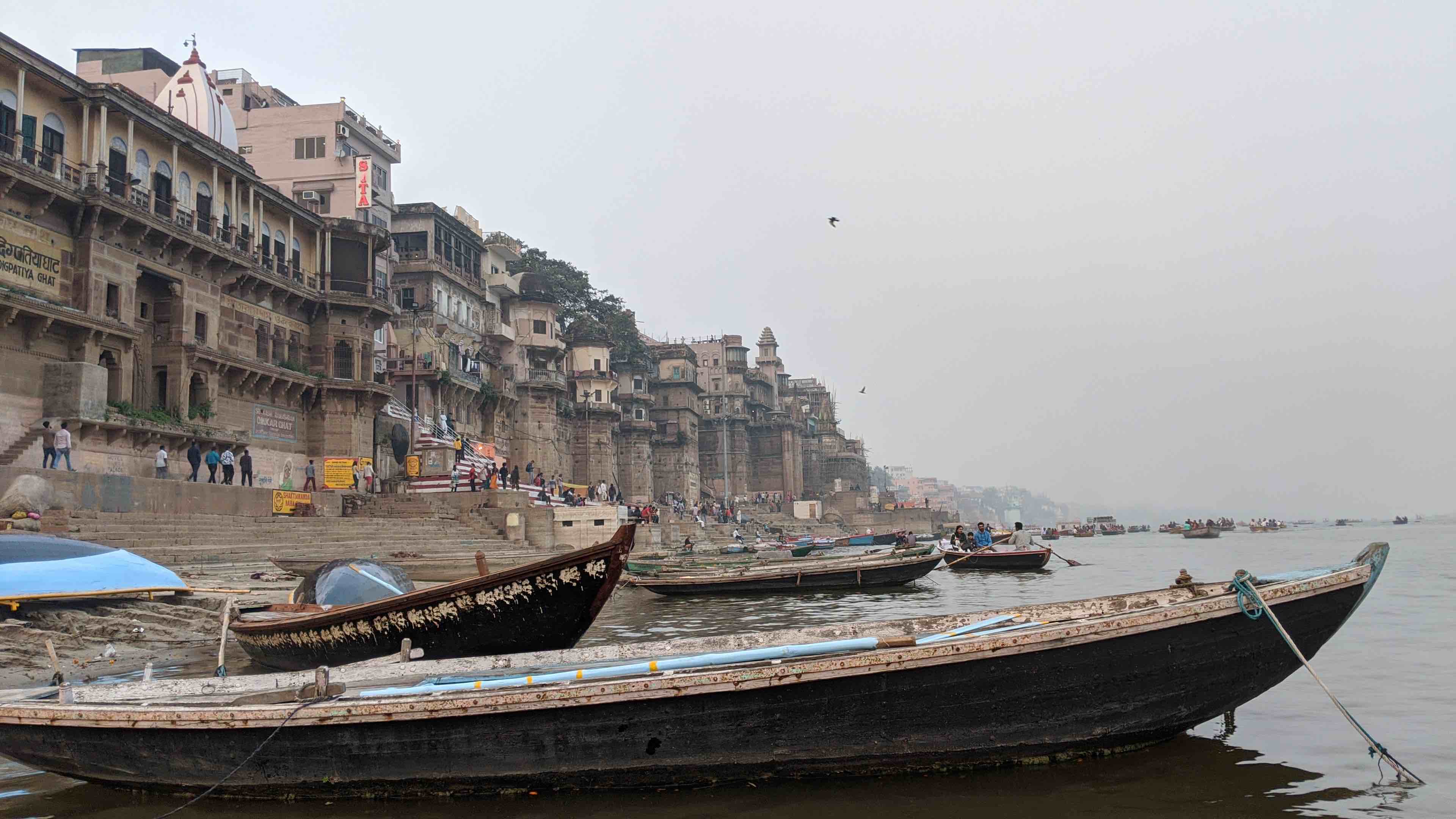 Before even arriving in Varanasi, I already knew that it was going to be the highlight of my trip.

I remember late 2018 when I was daydreaming about going to India. Lots of free time during my dayjob, so I was able to do extensive research on the various sights of India. One picture caught my attention instantly: a panoramic picture of the ghats (the steps) along the Ganges river at sunset. Something about the location seemed so otherworldly, so out of time, so spiritual that I knew that I had to visit one day.

Finally, the day has come. Varanasi is the next and last stop of my India trip.

My flight to Varanasi from New Delhi was scheduled to leave at 1:30 pm. From my hotel, it was just a straightforward route to the airport: I just had to walk to the New Delhi Metro and then ride the Airport Link. 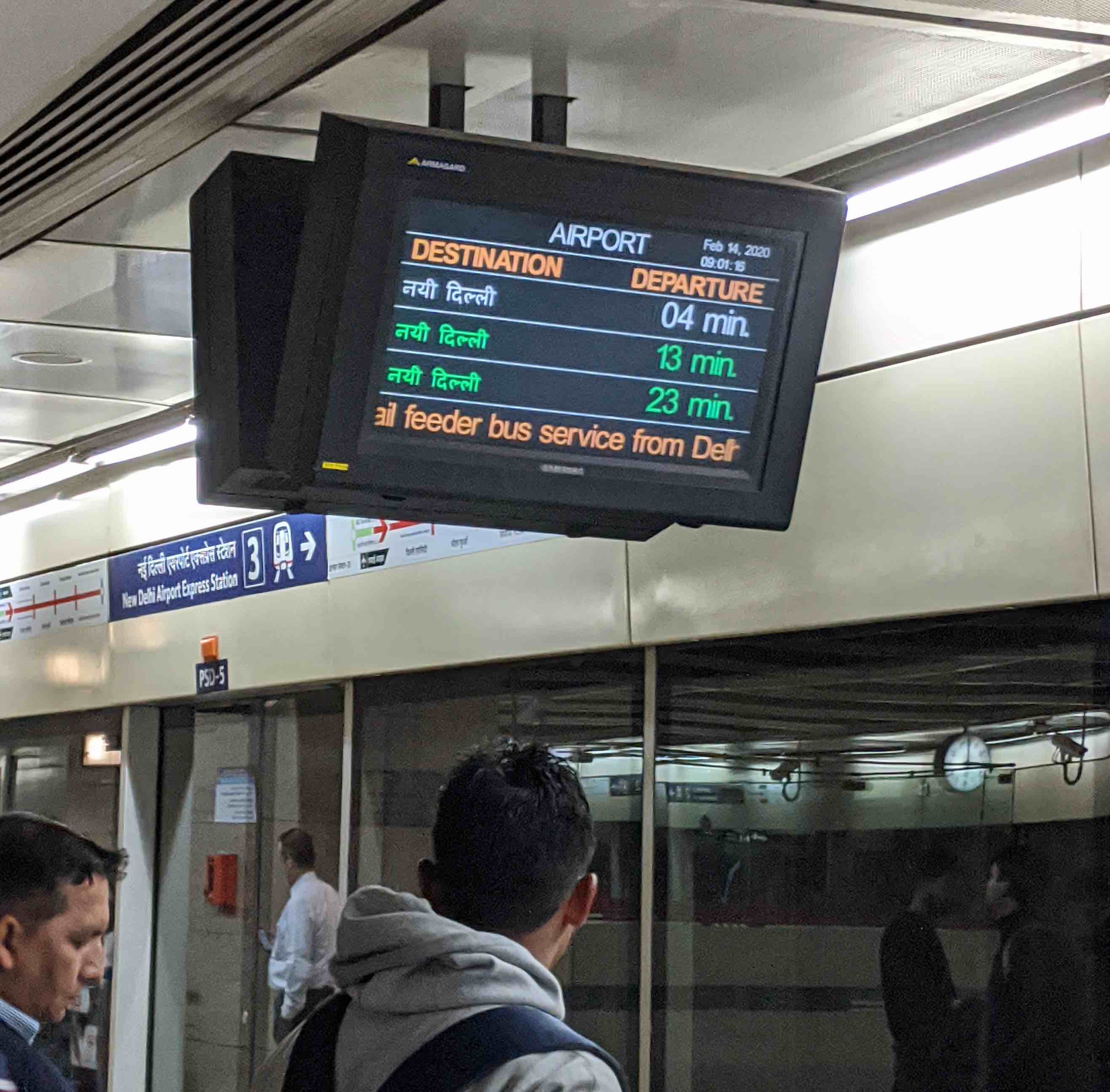 However, it was very ignorant of me to assume that local flights and international flights were serviced by the same airport.

Midway through the Airport Link, I checked my online ticket and saw that my Varanasi airline was serviced by Terminal 1D but I was headed towards Terminal 3, my port of entry to India. Panic immediately set in and I rush-researched on how to get to Terminal 1D. The online directions suggested that I go down the station before Terminal 3 (Aerocity) and ride a shuttle bus (about 20 minutes) that connects to Terminal 1D.

Crisis averted 😌, but I was a bit cautious with time because I didn’t plan for this detour. Anyway, this was around 11:30 and I still had 90 minutes to rush before the check-in counter closed.

I arrived at Aerocity station at about 12:00 pm and bought a ticket for the connecting shuttle. Leaving the station, my heart dropped a bit because I saw how heavy the traffic was.

I couldn’t see any shuttle bus approaching so I had to think fast. I asked a taxi driver to take me to Terminal 1D but he was aware of the situation so he obviously charged too much. I said no. I thought about walking but realized that I wouldn’t reach in time. Only 40 minutes left.

The taxi driver approached me after a few minutes, notifying me that two other passengers were willing to split the cost. I agreed to the terms and got inside the taxi.

That taxi ride might have been the most stressful moment of the trip. Traffic was horrible, and there was zero slack time. I stopped looking at the time and just let the hands of fate take over.

Eventually we reached the airport, and I dashed out towards the check-in counter. I arrived 12:59 pm, a minute before check-in closed. Closest call I’ve ever had. 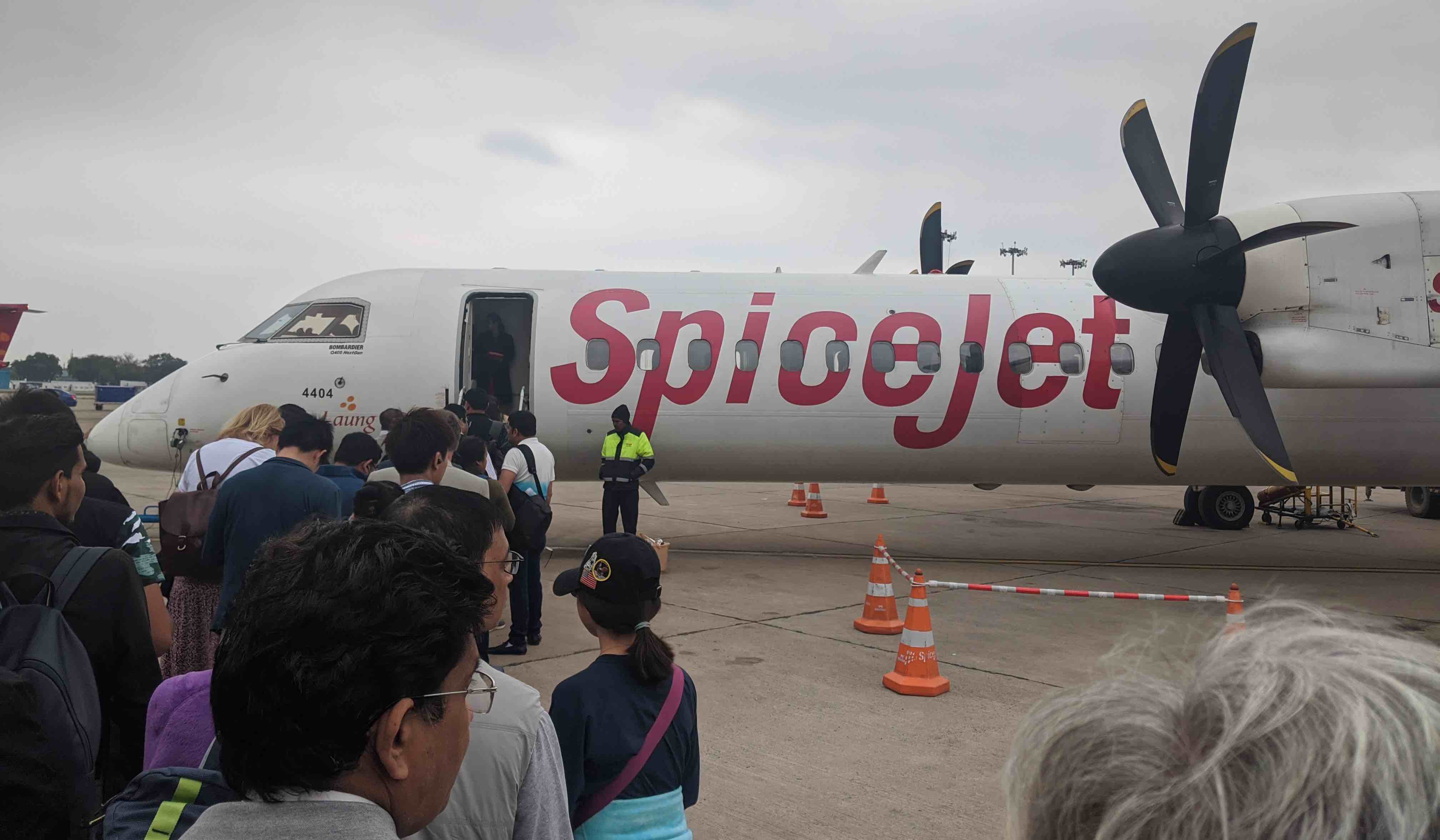 Where is my Hotel?

After arriving in Varanasi, I immediately looked for a ride to my hotel. I was able to find a shared taxi that would take me close to the Ganges ghats, where my hotel was close to.

My hotel emailed me prior to the trip that cars were not allowed at a certain distance from the ghats. There was a makeshift barricade for cars and the passageways near the ghats were too narrow, so the only ways to navigate the ghats were by motorcycle or by foot.

My taxi dropped me near a crossing and told me to ride a rickshaw since cars were apparently not allowed further. I walked a bit and found a rickshaw and asked him to take me close to my hotel. After about 10 minutes, he told me to get off because rickshaws were not allowed on the road either.

So there I was, quite lost. Not a new feeling in India for me. 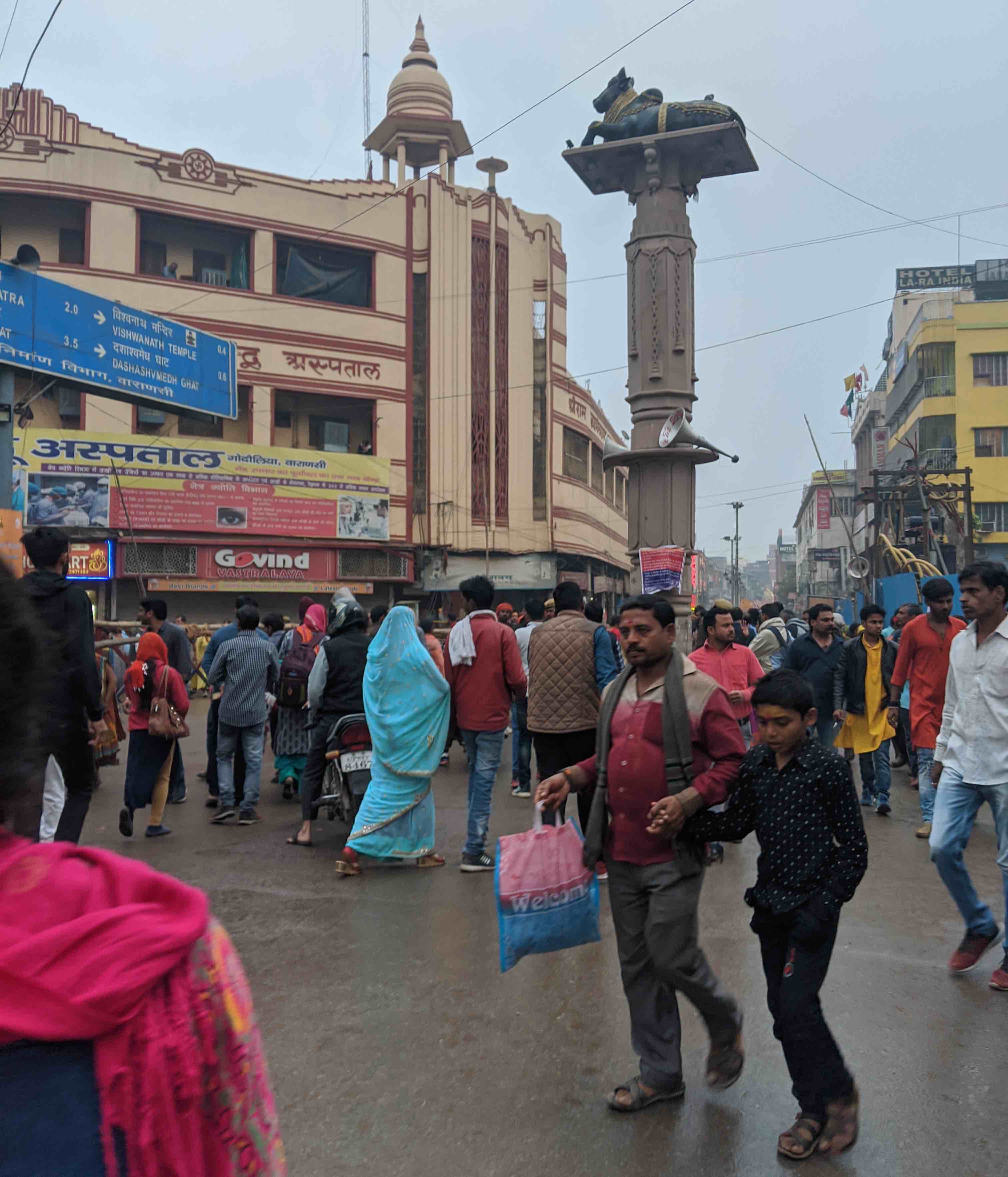 It felt surreal to walk the streets of Varanasi because it felt like a place stuck in time. No cars, vintage buildings, people in traditional sari. I was digesting my surroundings. 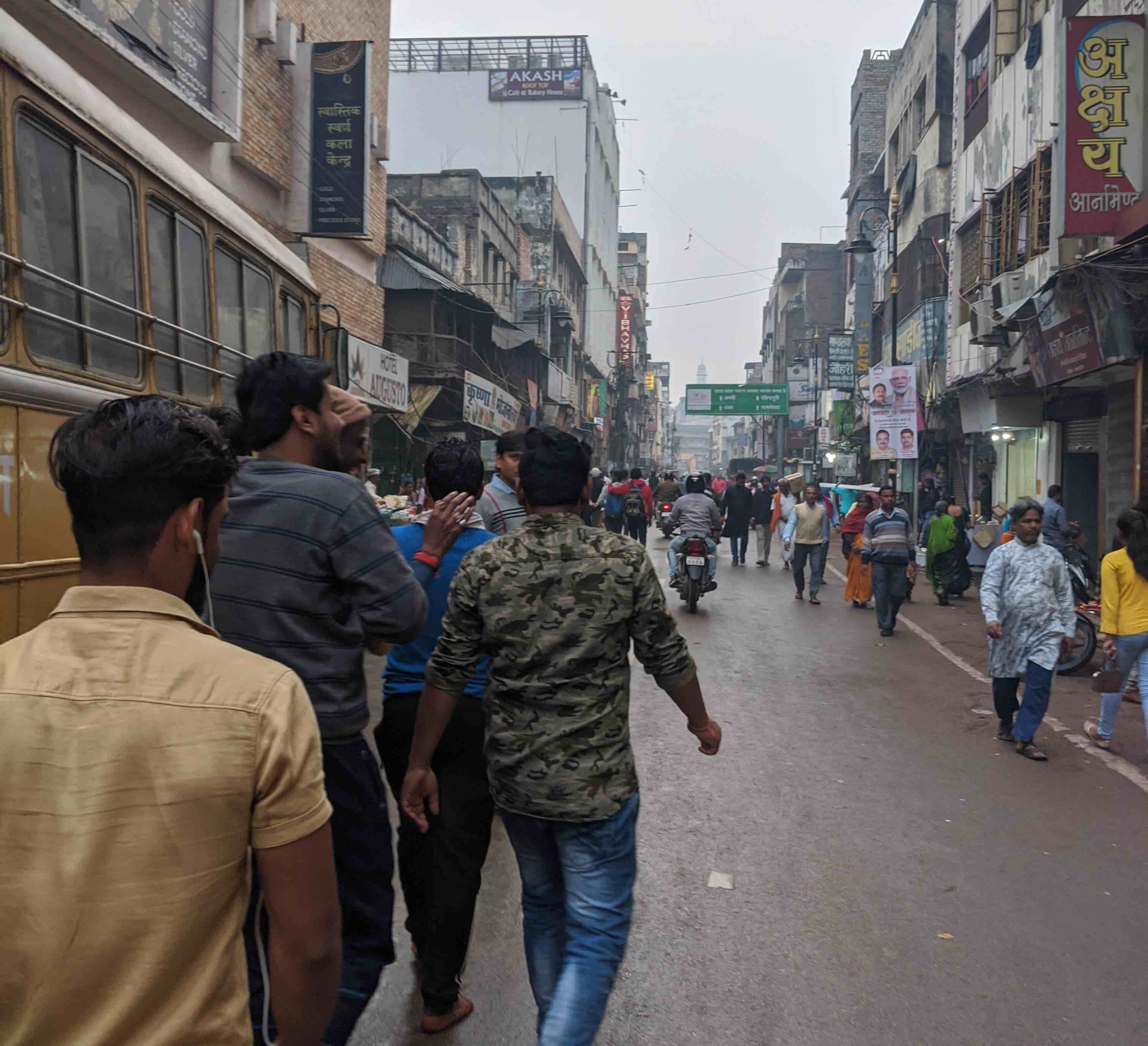 Eventually the streets indeed got narrower, and instead of people causing pedestrian traffic, it was now animals, particularly cows. 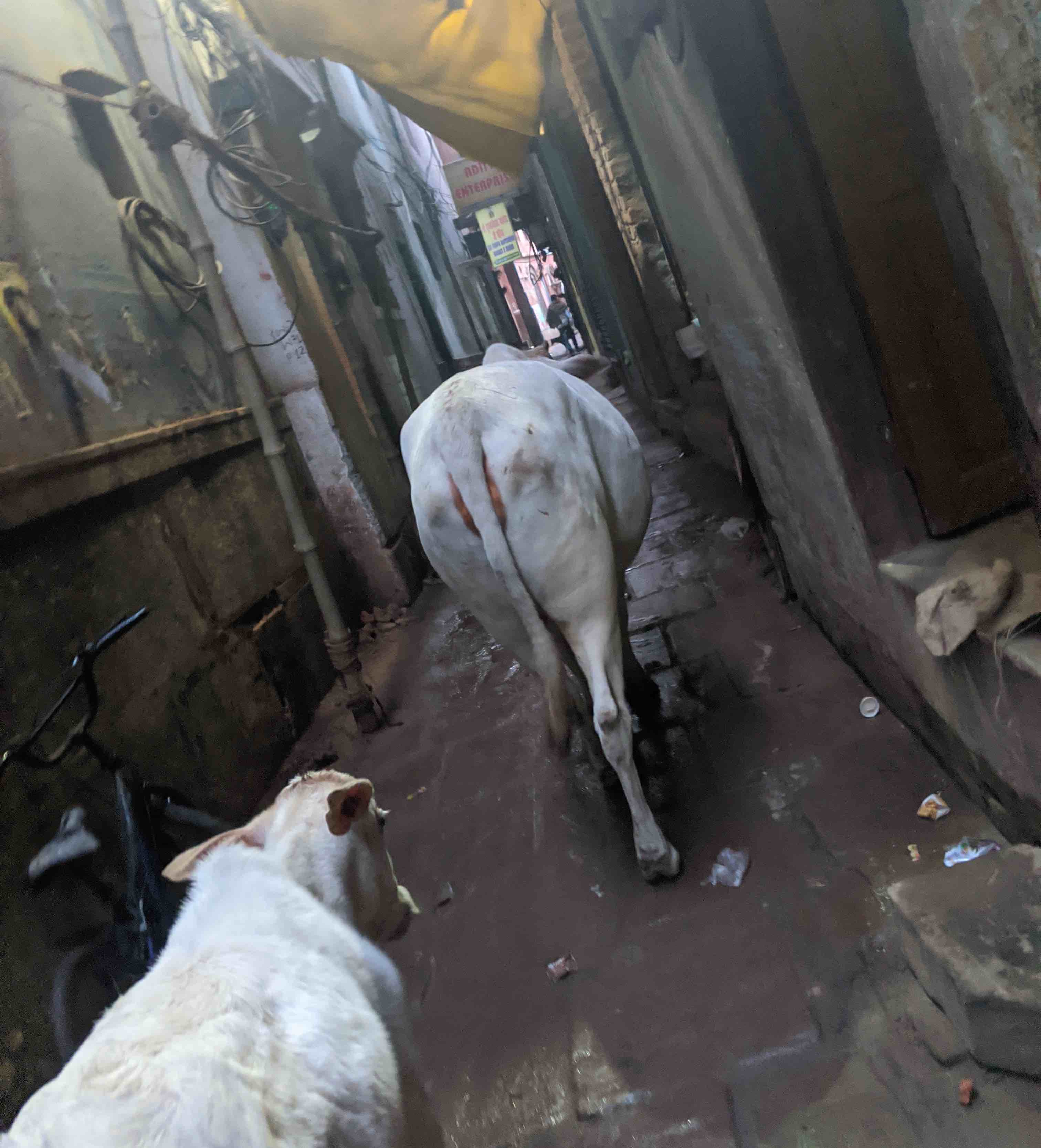 Streets near the ghats are narrow and labyrinth-like, so it’s best to have an offline map to get the general direction of things. Cell service around the area isn’t great, and the labyrinth-like roads aren’t charted that well on Google Maps. It’s very easy to get lost. 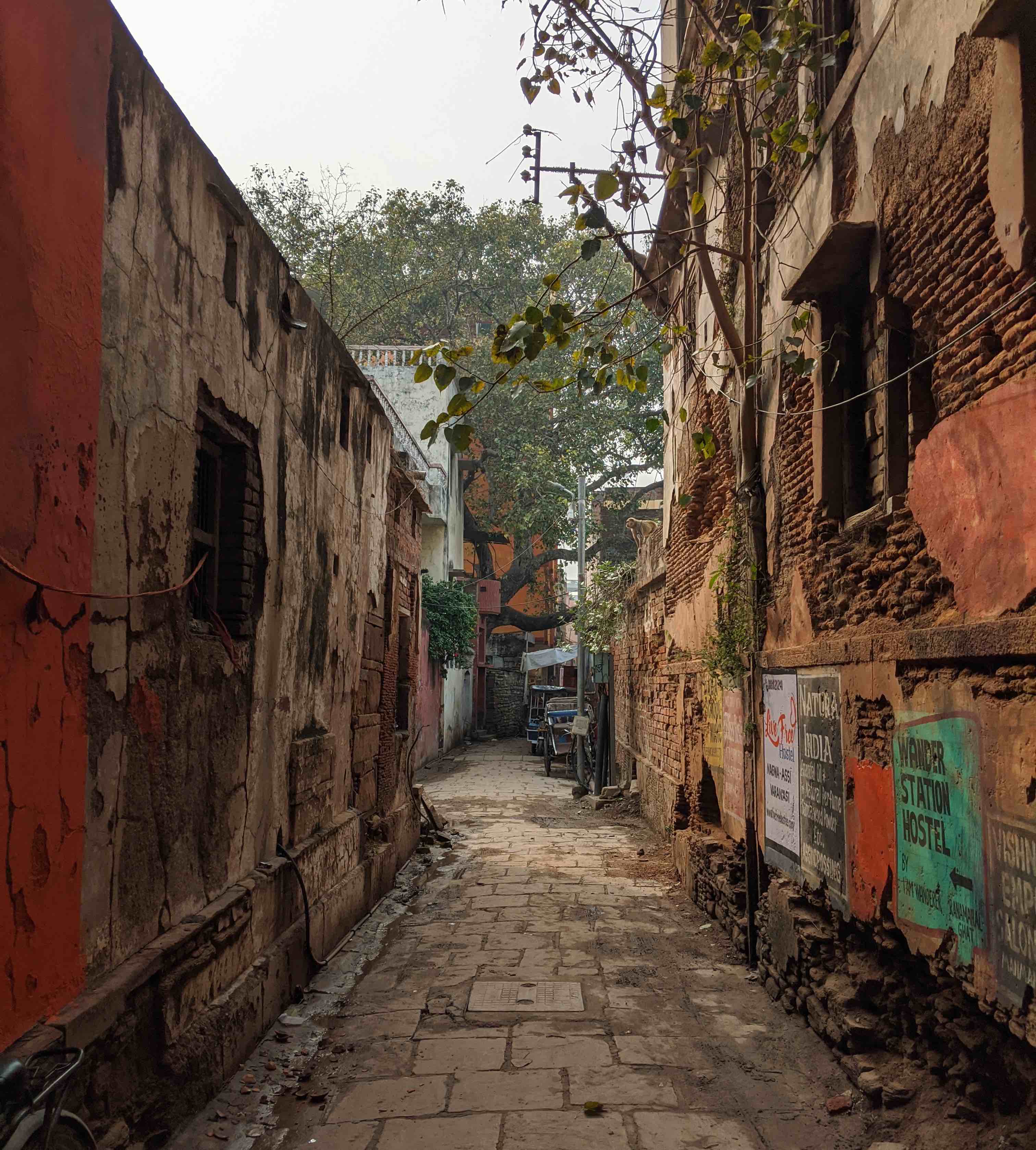 After some effort, I was able to get to my hotel and rest for the days to come. By that time I was already feeling quite sick, symptoms of the Delhi Belly I was experiencing, so I was not in a very energetic mood.

The main reason why I wanted to visit Varanasi is to see the renowned Ganges ghats. No particular itinerary, just walk around and absorb the culture.

Varanasi is considered the holiest city in Hinduism as it lies on the banks of the Ganges River. Along the Ganges are the ghats, embarkments or steps that lead to the river. Many of the ghats are settings of religious ceremonies, like the Ganga Aarti and cremation, while some serve as boat docks, bathing areas, and general hangout spots.

On my first evening in Varanasi, I went to the Dashashwamedh Ghat to witness the Ganga Aarti, a ceremony of praise and offering for Mother Ganga. It was amazing to see how thick the crowd was when I got there. Can’t believe that this happens every night of the week. 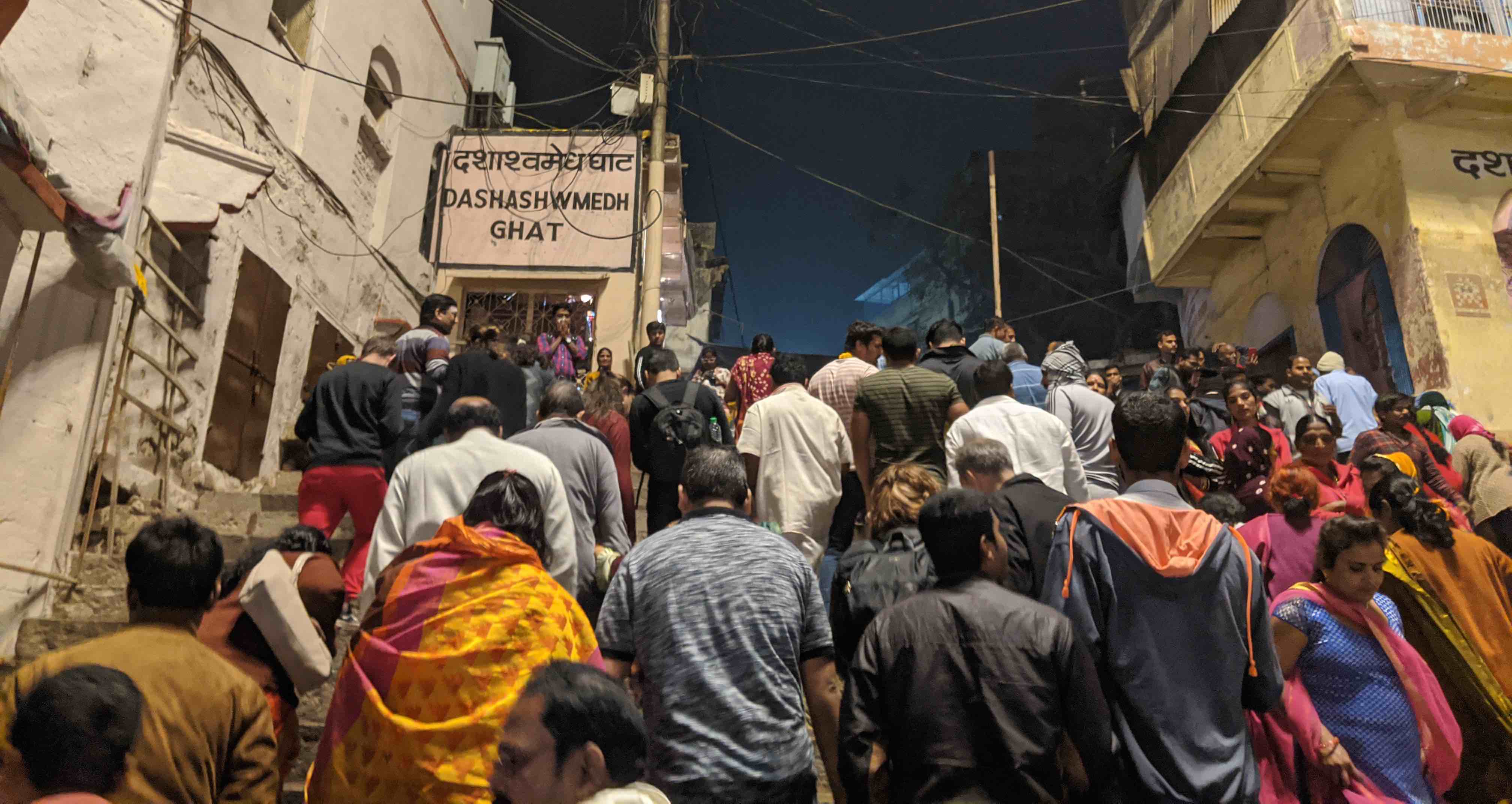 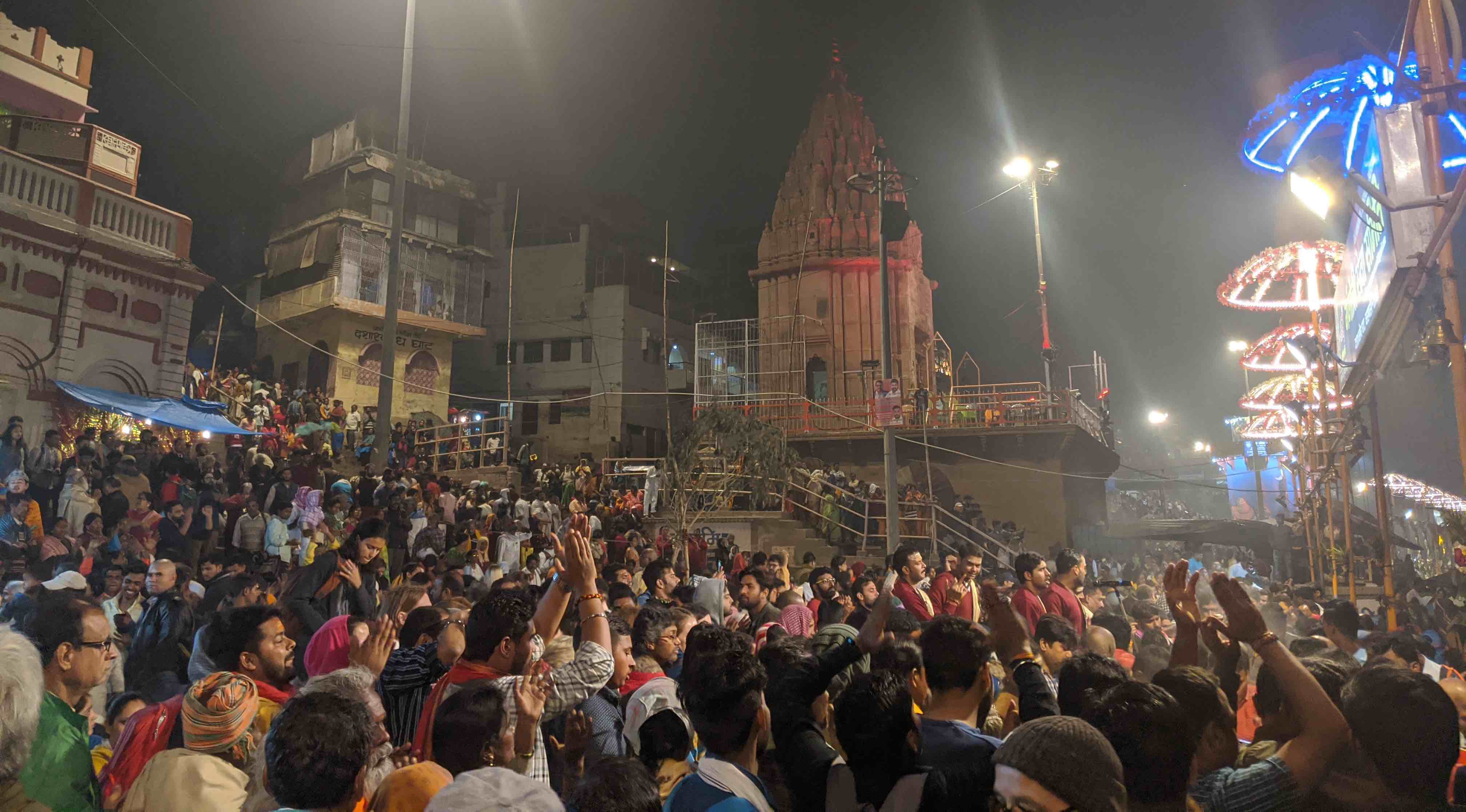 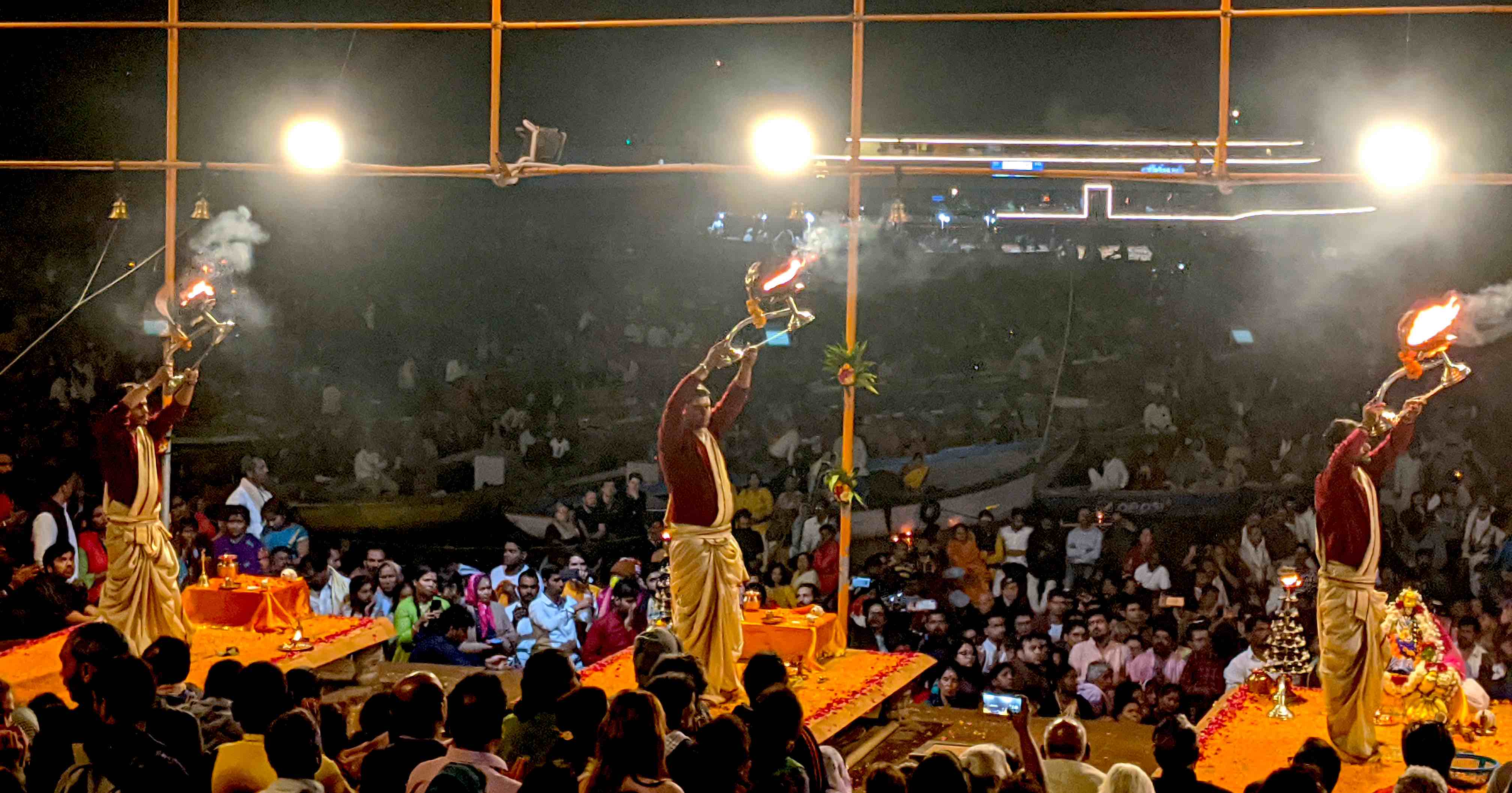 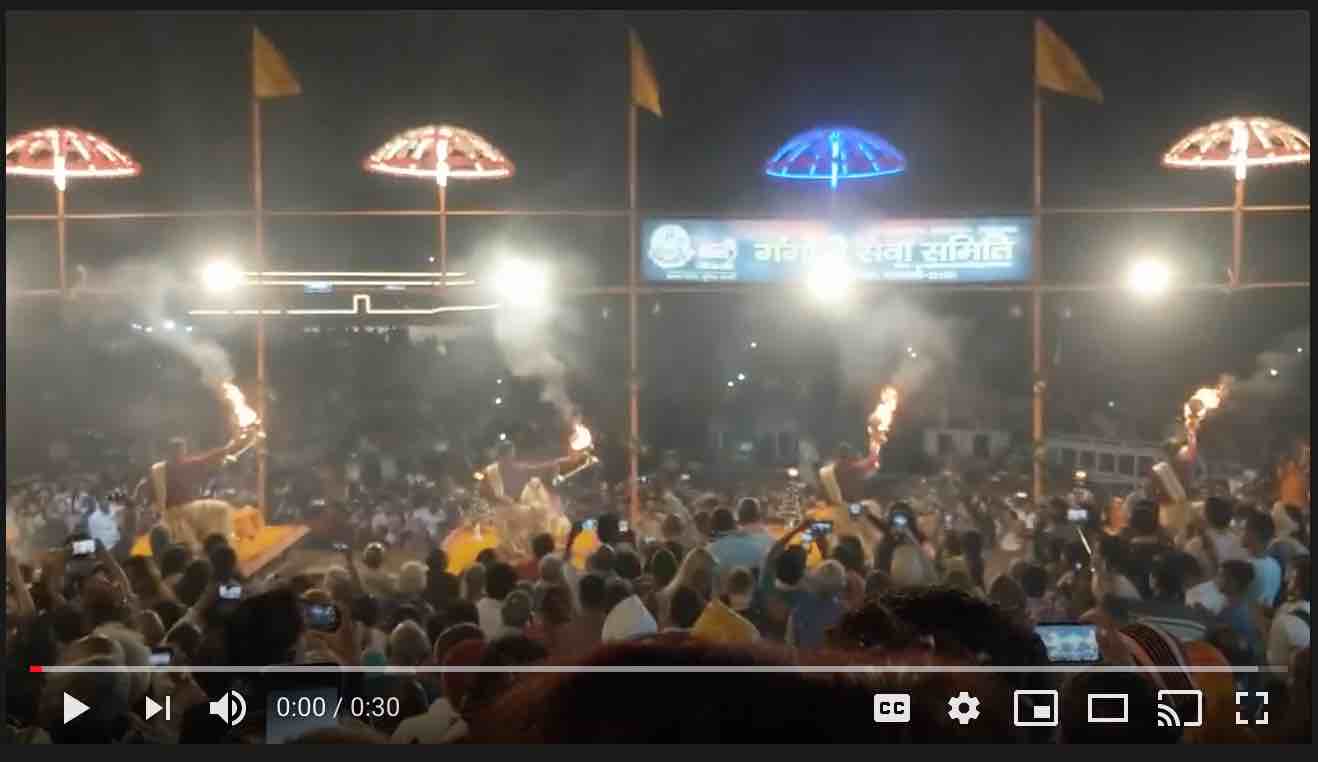 A Night Out in Varanasi

After the Aarti, I walked around town, just soaking in the environment. Being in Varanasi made me feel like an alien from a cultural standpoint. It is definitely the most spiritual place I’ve been to, and I think the fundamental way of life is very much different here from what I was accustomed to. Life is slow here. Capitalism took a backseat; spirituality and solemnity take centerstage.

Also, no cars because of the bamboo barricade. 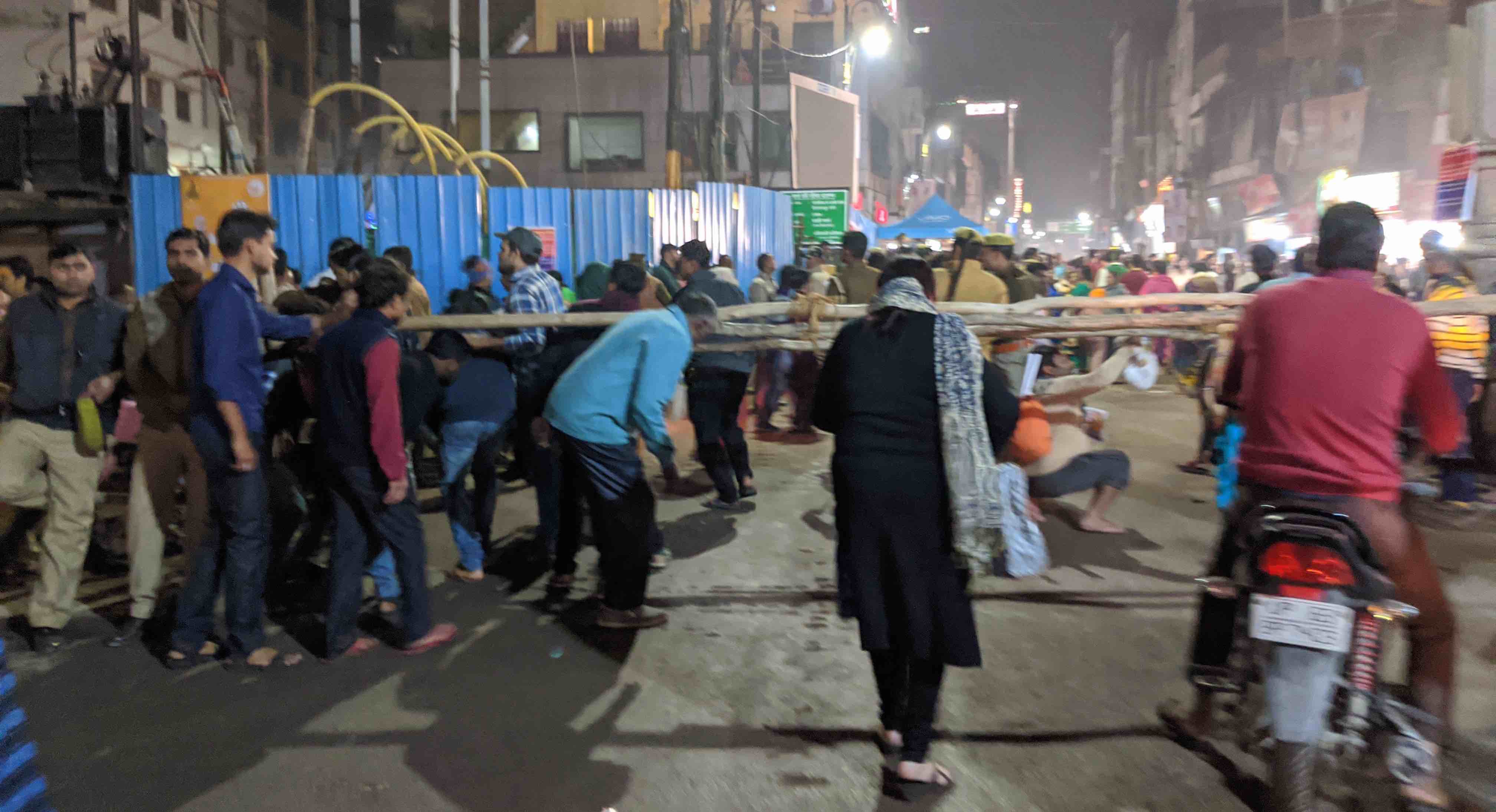 As I was there on the weekend, there were lots of celebrations going on, bhang lassi passed around, and masses of people on the street. 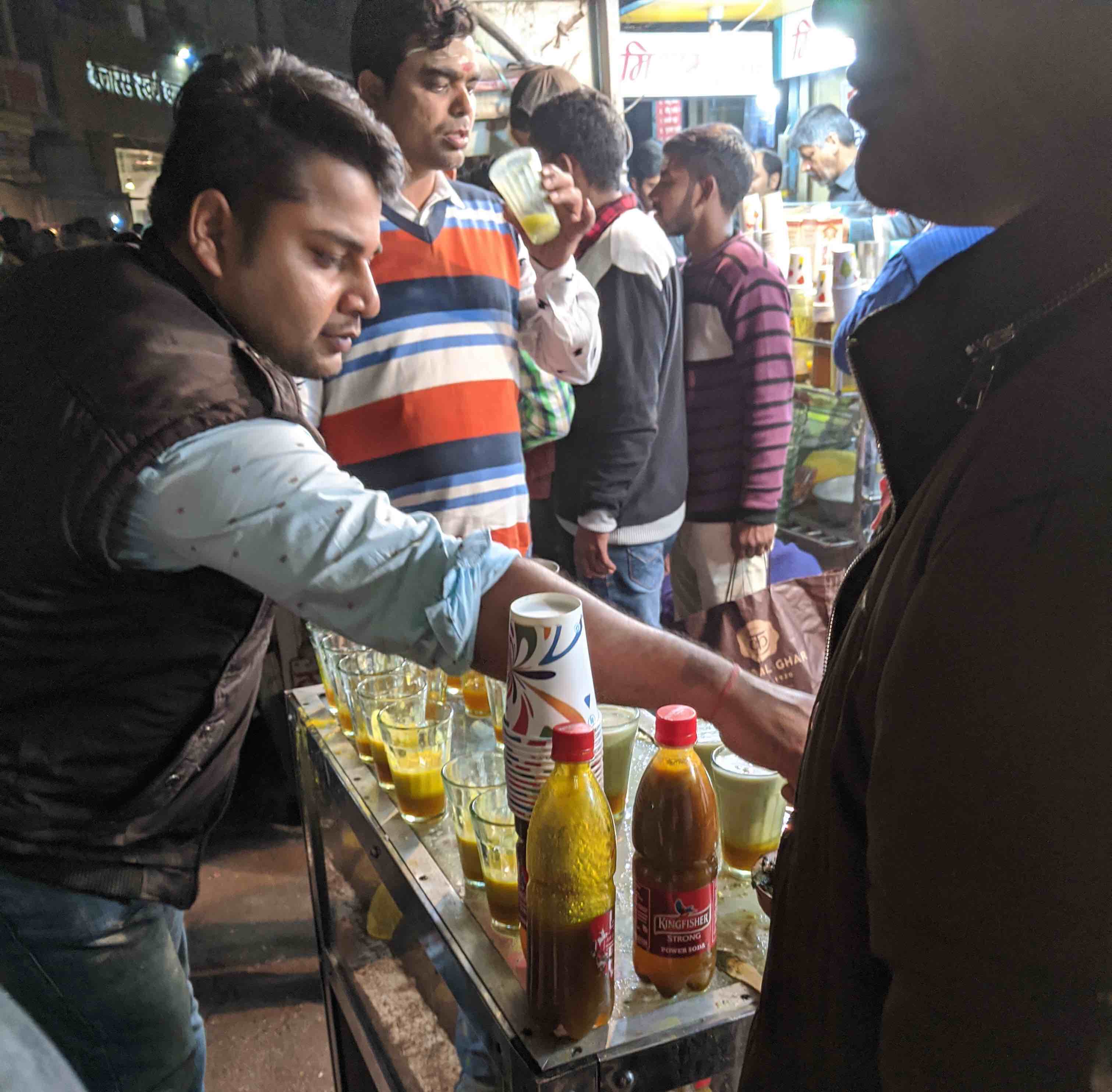 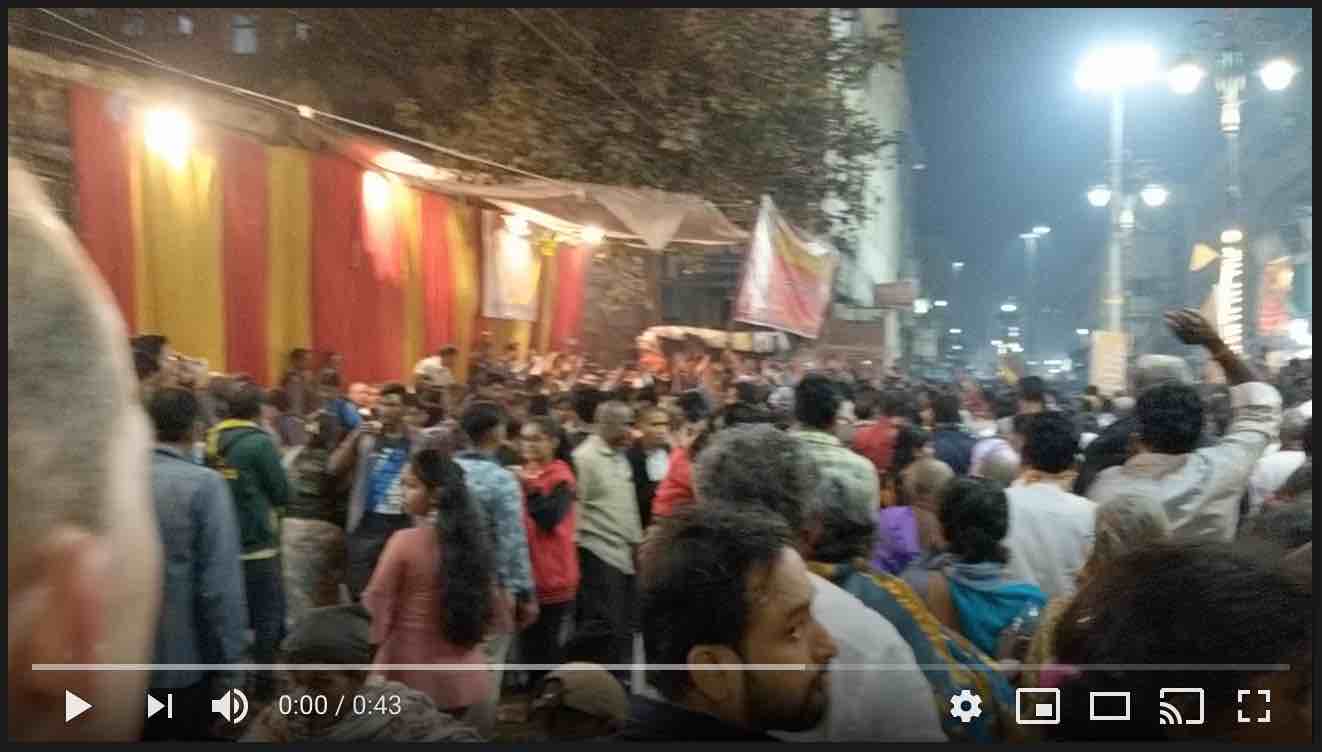 A Boat Ride Across the Ganges

On the second day, I took a boat ride across the Ganges river to have a panoramic view of the ghats. The water was definitely not clean, but it’s impossible not to admire the beauty and otherworldy charm of the ghats. 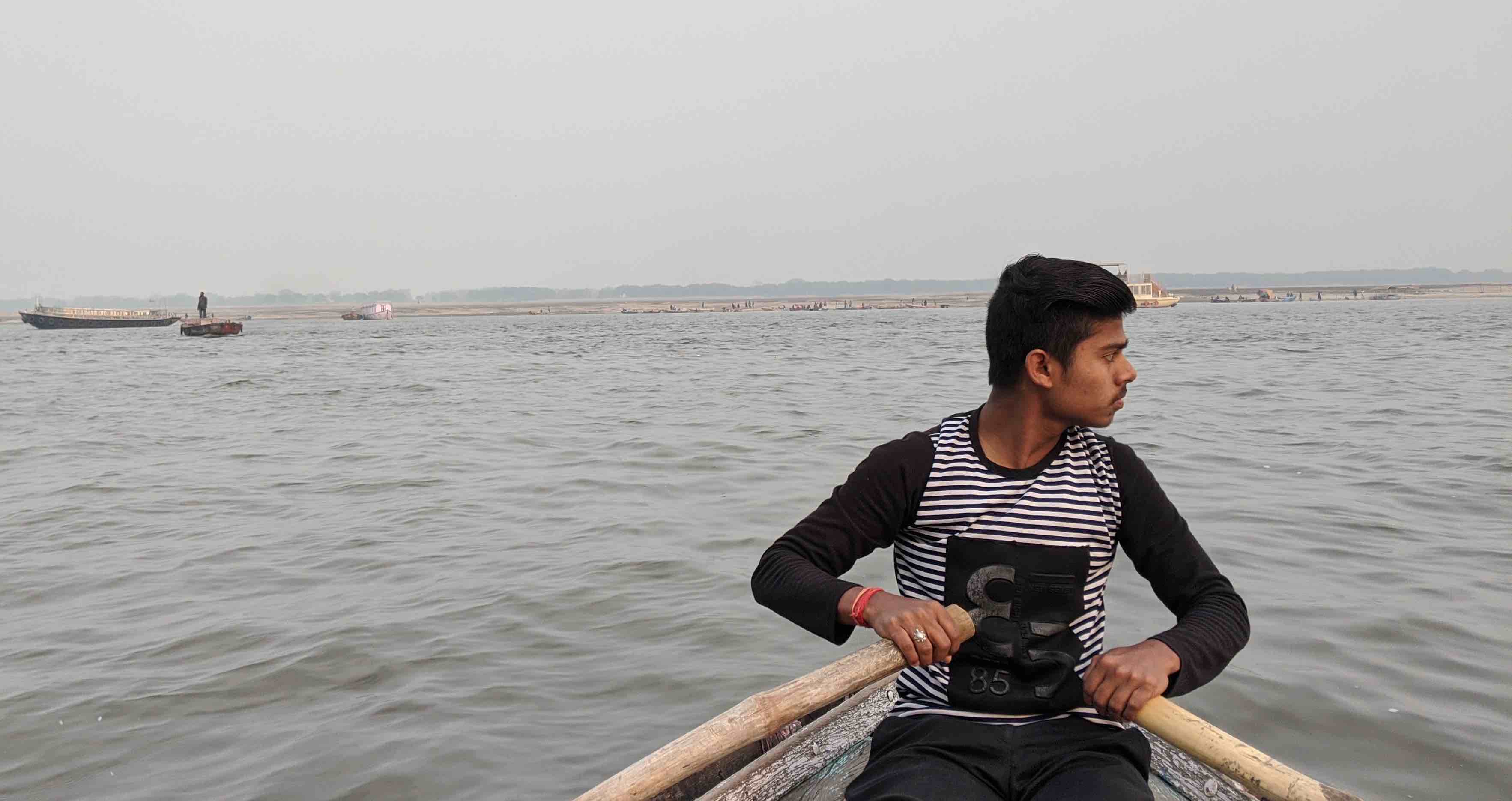 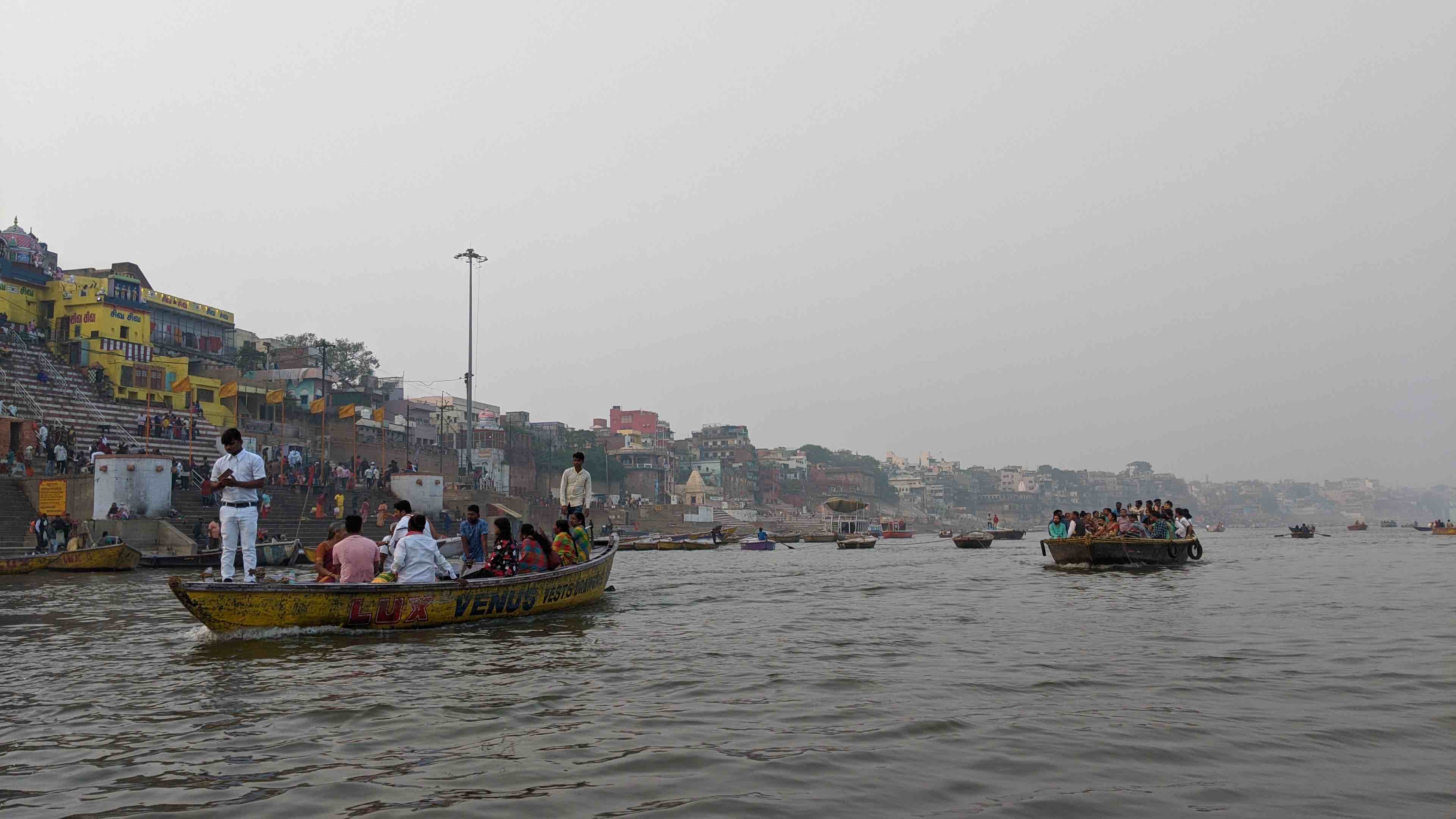 On the other side of the river were a few boats. Apparently there was a boat competition happening the next day, so people were very busy putting last-minute touches on decorations. 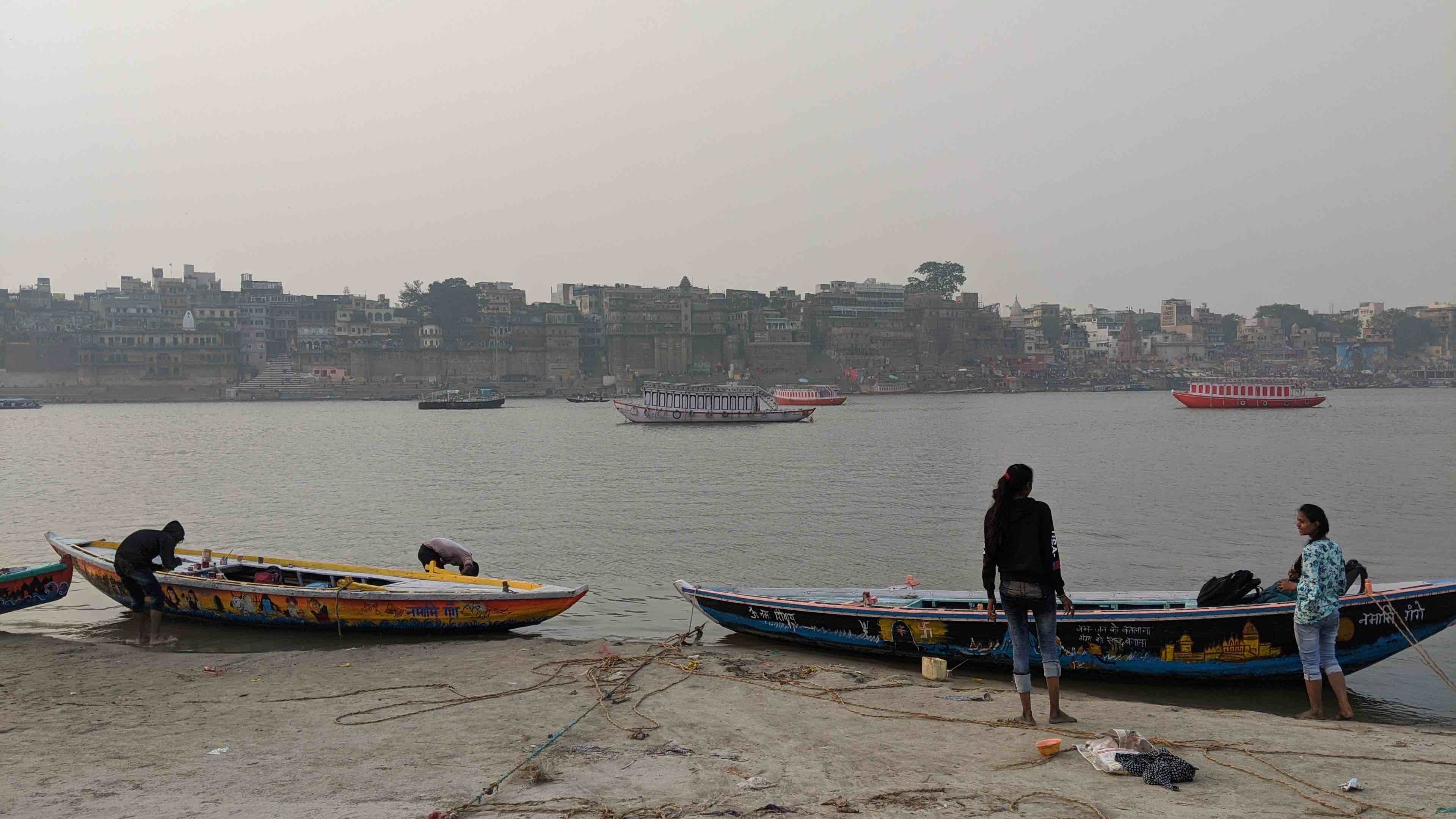 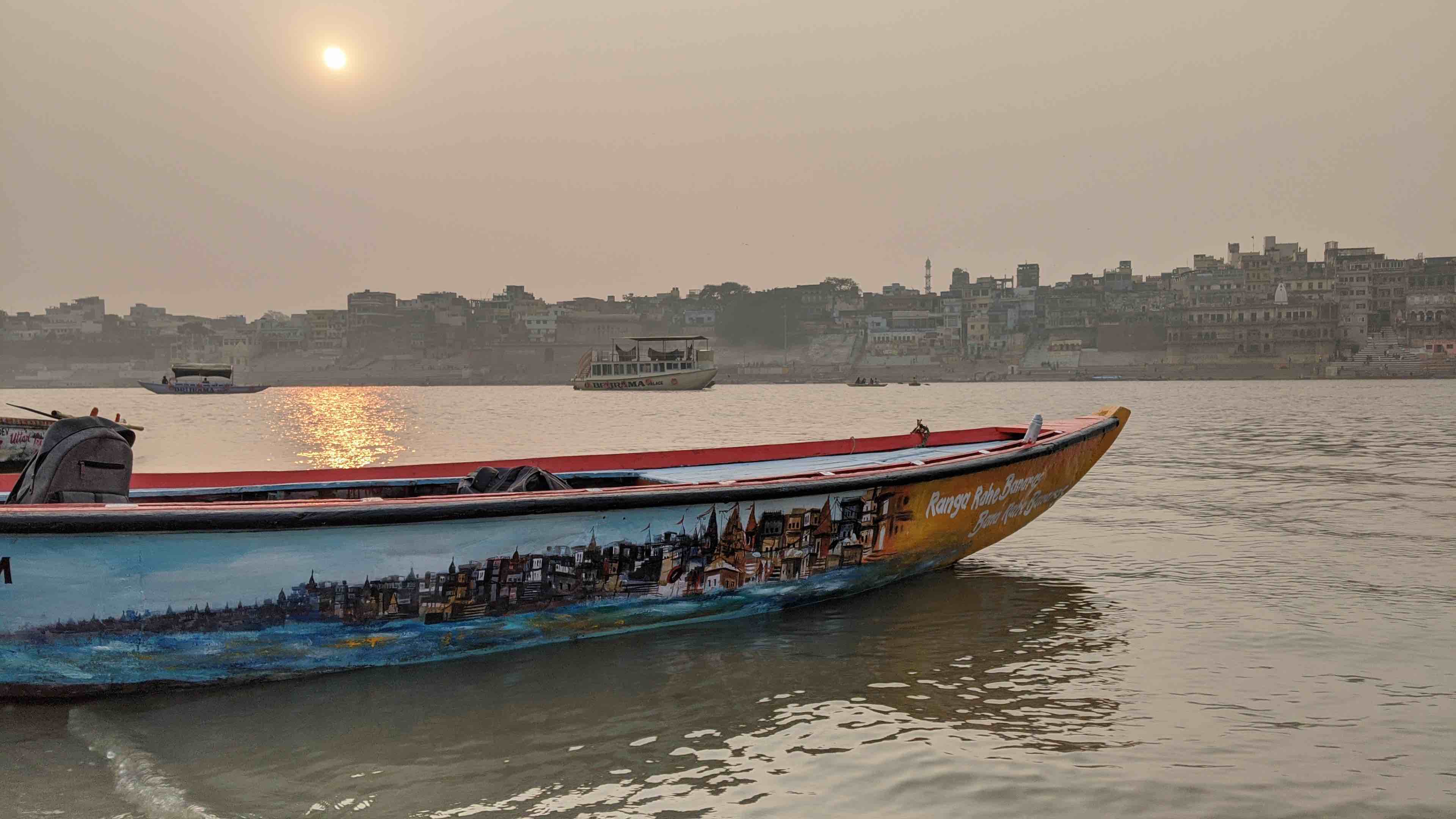 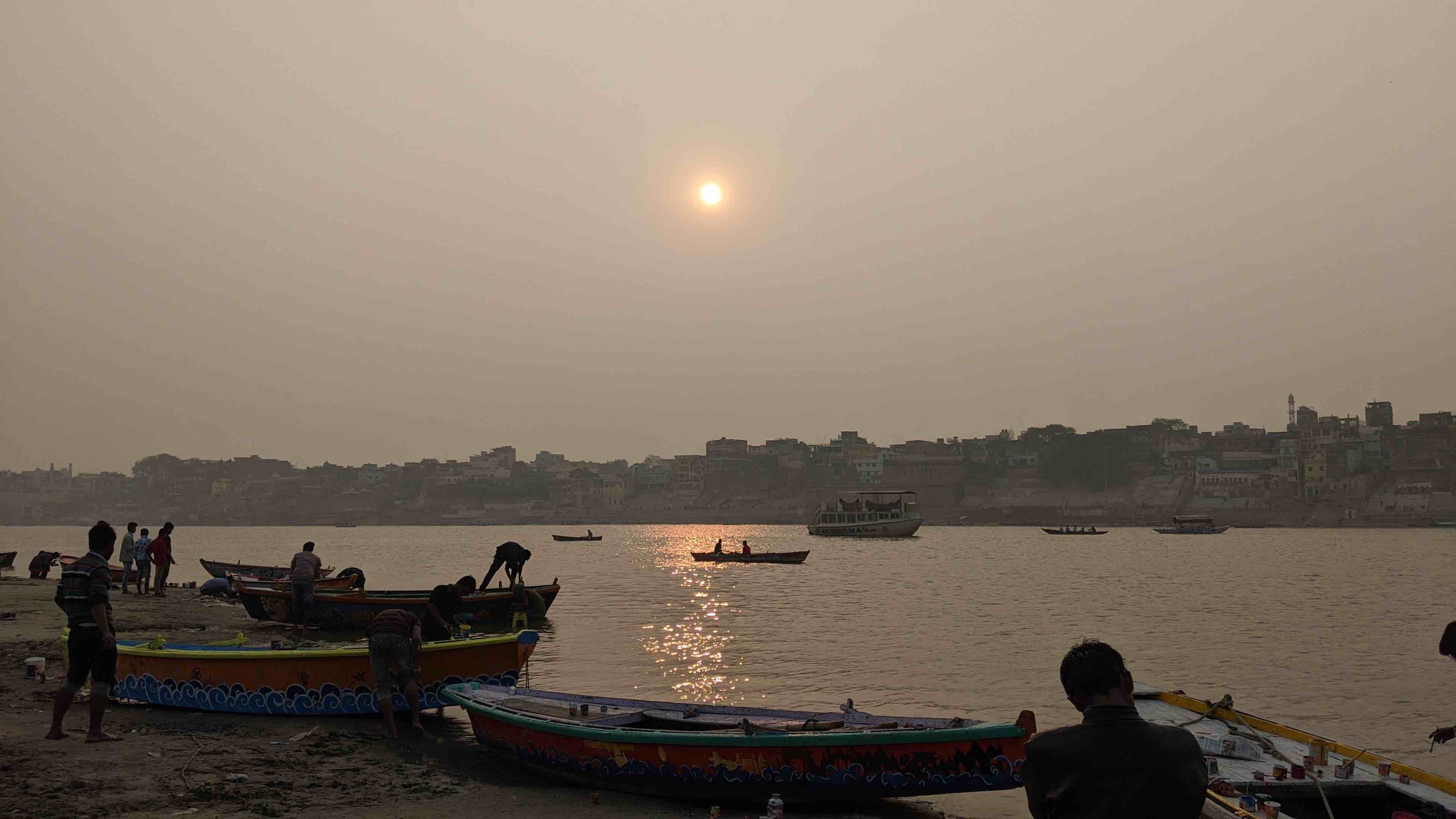 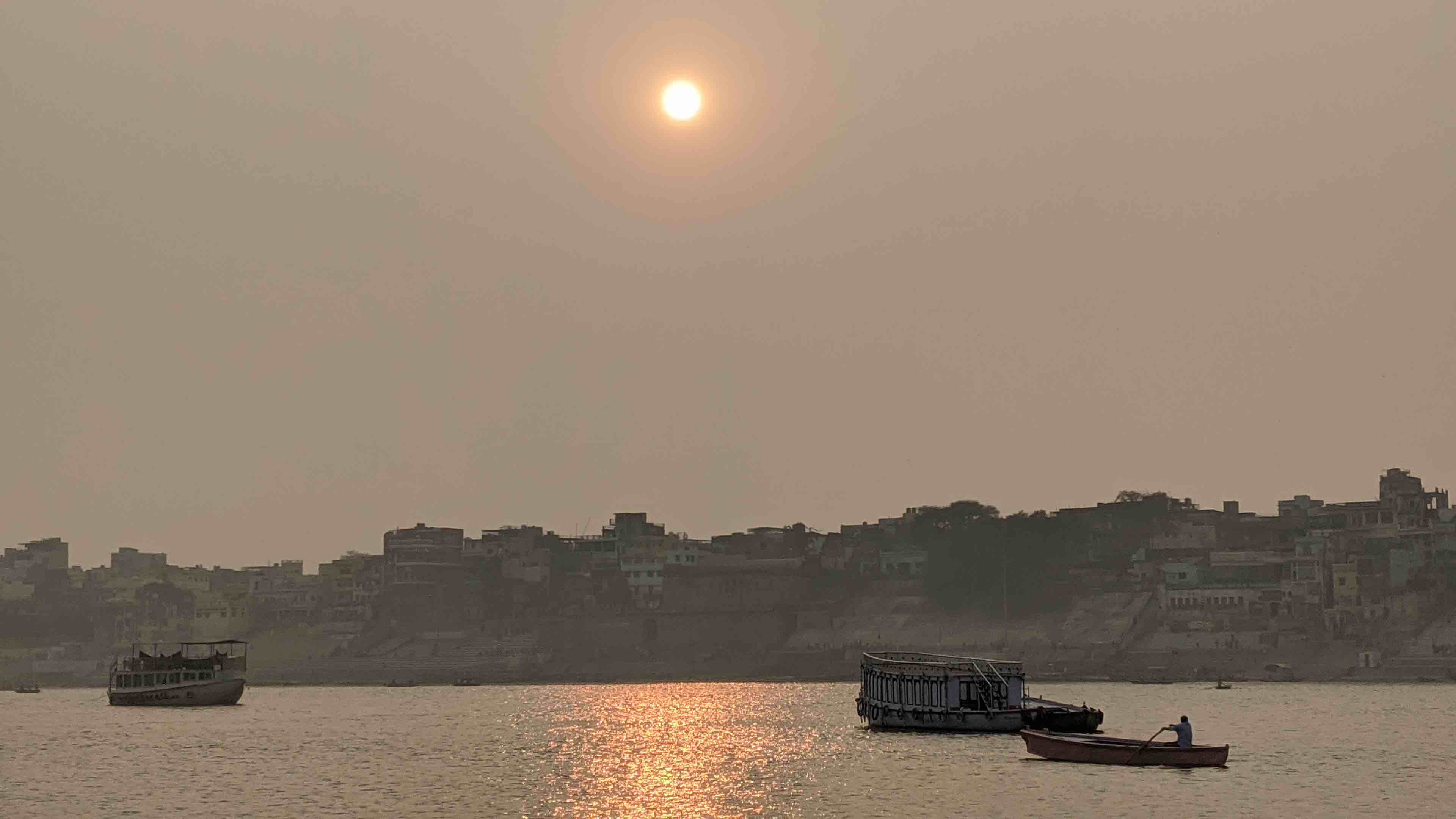 On my last day in Varanasi, I simply went strolling along the riverbank. While walking at one of the chill ghats, a man approached me and offered me a massage. Without me even saying anything, he took my hand and gave me a hand massage on the spot. Suspicious, but quite relaxing. So he gestured me to go to his spot near the edge of the water and told me to lie down. He called another guy over and the two of them gave me a massage by the river. With the sun shining bright and four hands massaging me, I felt relaxed to the point that I almost dozed off. Gladly, I didn’t. After about 30 minutes or so, I stood up and paid what I thought was a fair price. 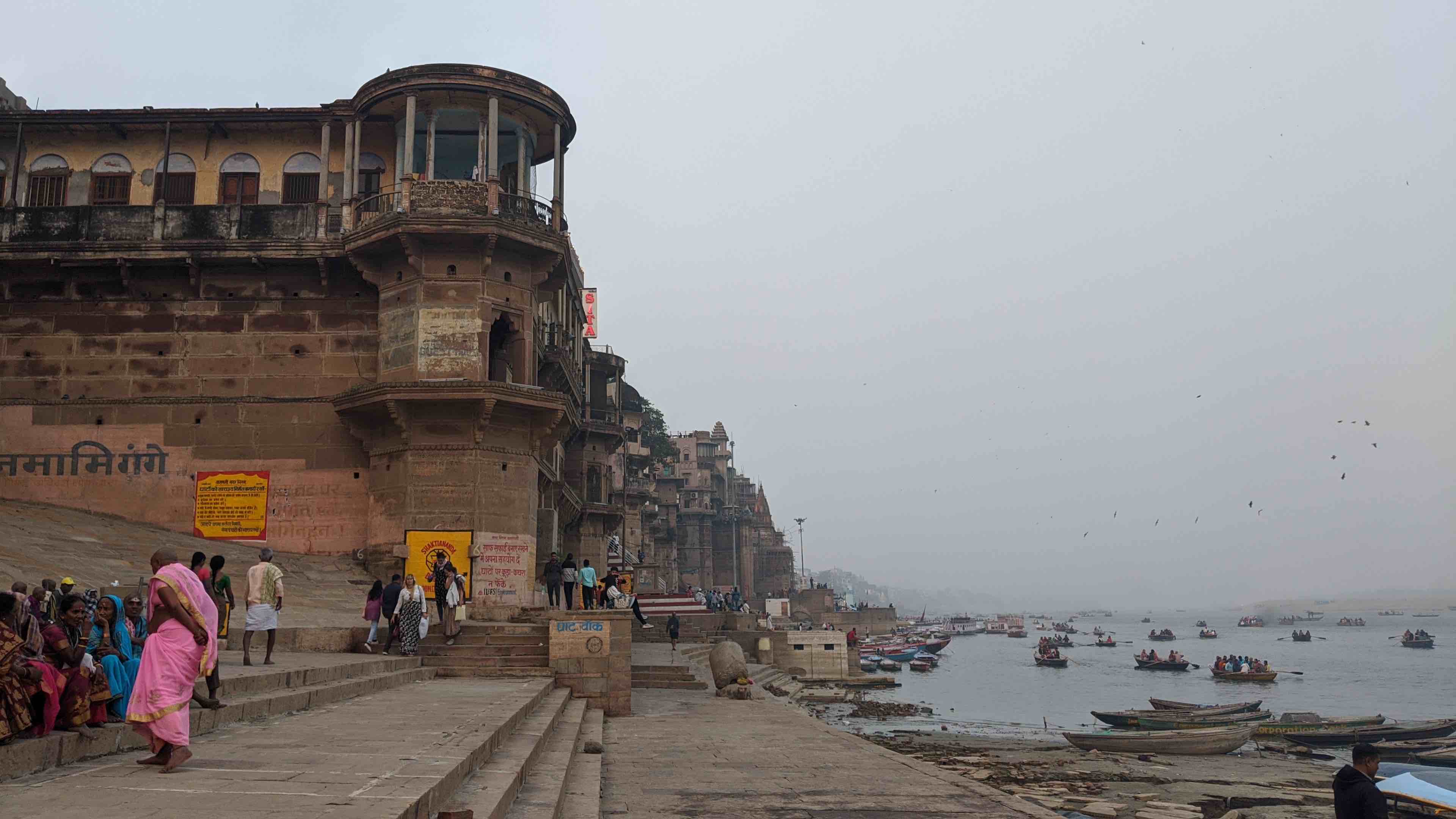 The last stop on my India trip was the Manikarnika Ghat, more commonly known as the burning ghat. Considered by many worshippers as the gateway to heaven, the Manikarnika Ghat is where the dead are cremated. As cremation at Varanasi allows one’s soul to escape the cycle of rebirth, Hindus flock here to die. 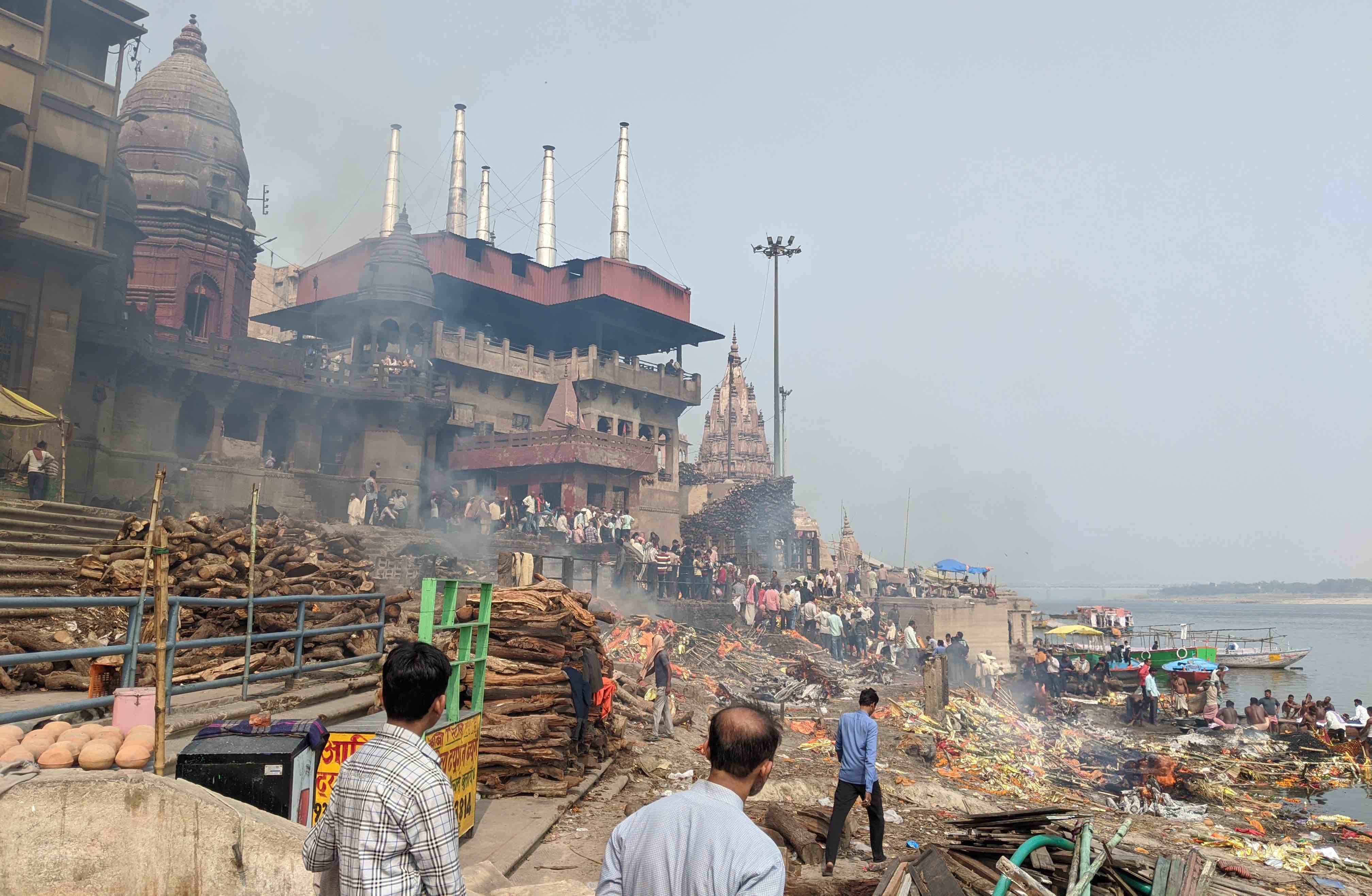 The atmosphere around the ghat is very solemn, as those that have passed on are handled by the untouchables, who first dip the bodies in the Ganges river then set them ablaze in a wood stack.

The End of the Trip.

Varanasi was the last stop of my India trip. After Varanasi, I took a flight back to New Delhi, connected through Ho Chi Minh, then arrived at my next destination, Bali.

My India trip was a cultural experience. I wasn’t really prepared for how culturally different India was from my bubble, and it definitely ignited my wanderlust for exotic places.

If I were to do it again, I would probably add a few more days as 4 cities in 10 days is quite a hectic affair, especially in India where long-distance train travel is the norm.