Agra: Of unpredictable trains and the Taj Mahal 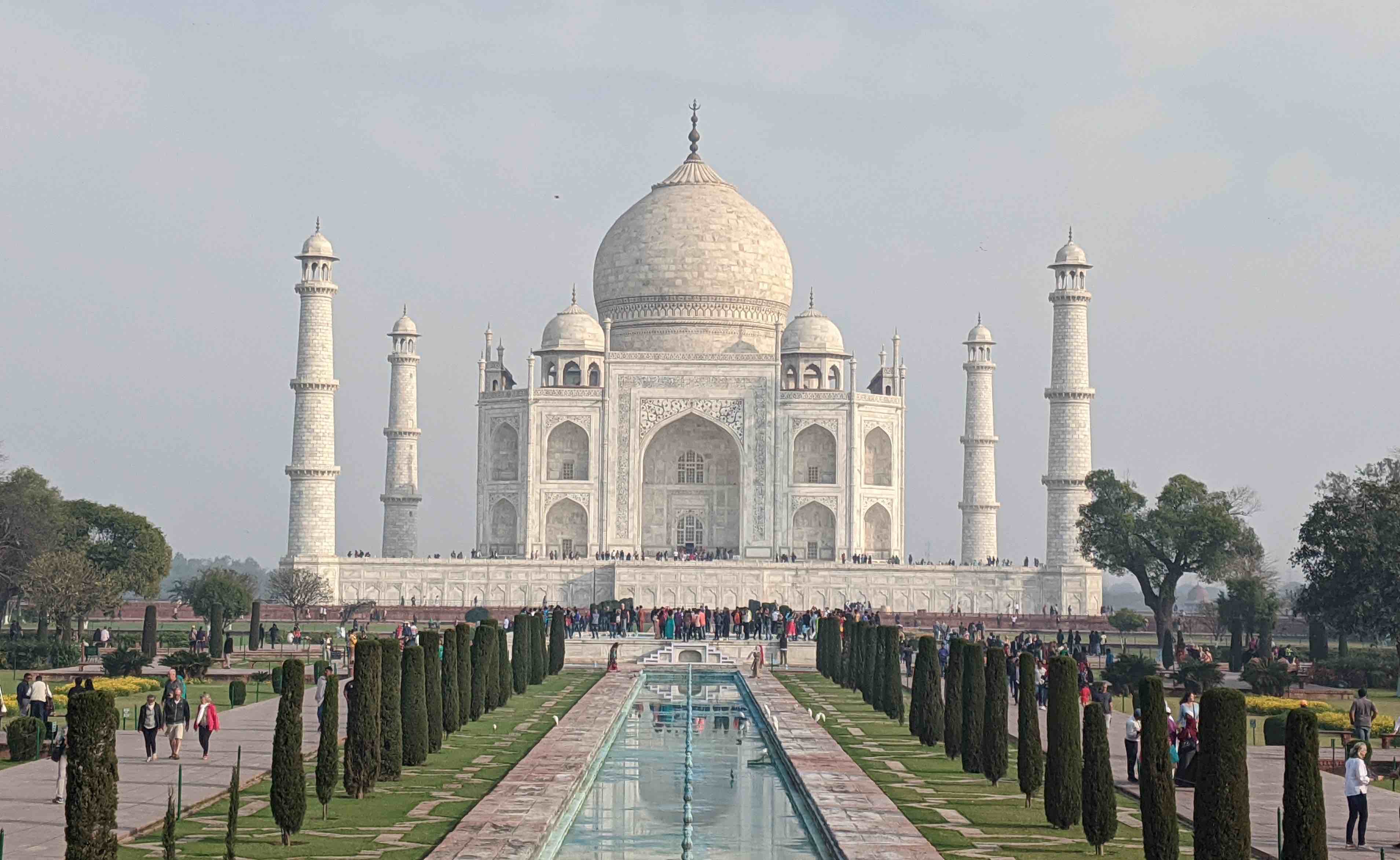 I only had one objective in Agra: visit the Taj Mahal. Any first trip to India would be incomplete without a side trip to see it.

I had already prebooked all my train rides prior to arriving in India, so going from one city to the next was a breeze and only a matter of showing up on time. Since my train ride was scheduled at around 2 pm in the afternoon and I had to check out of my hotel at 11, I decided to have brunch at a nearby restaurant called Nibs Cafe. Beautiful interiors, but the food was just ok. I had a savory waffle and some hummus on the side. 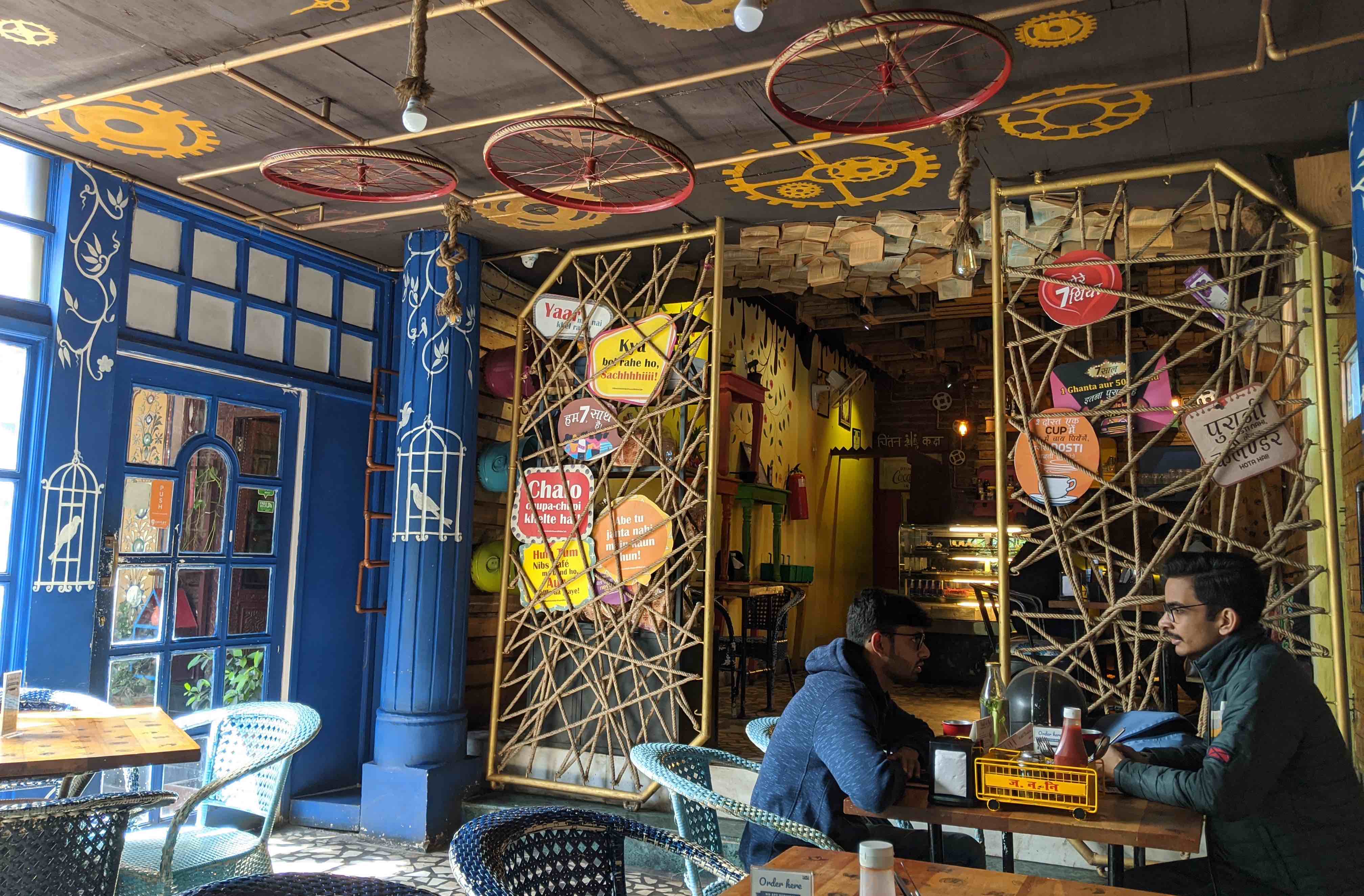 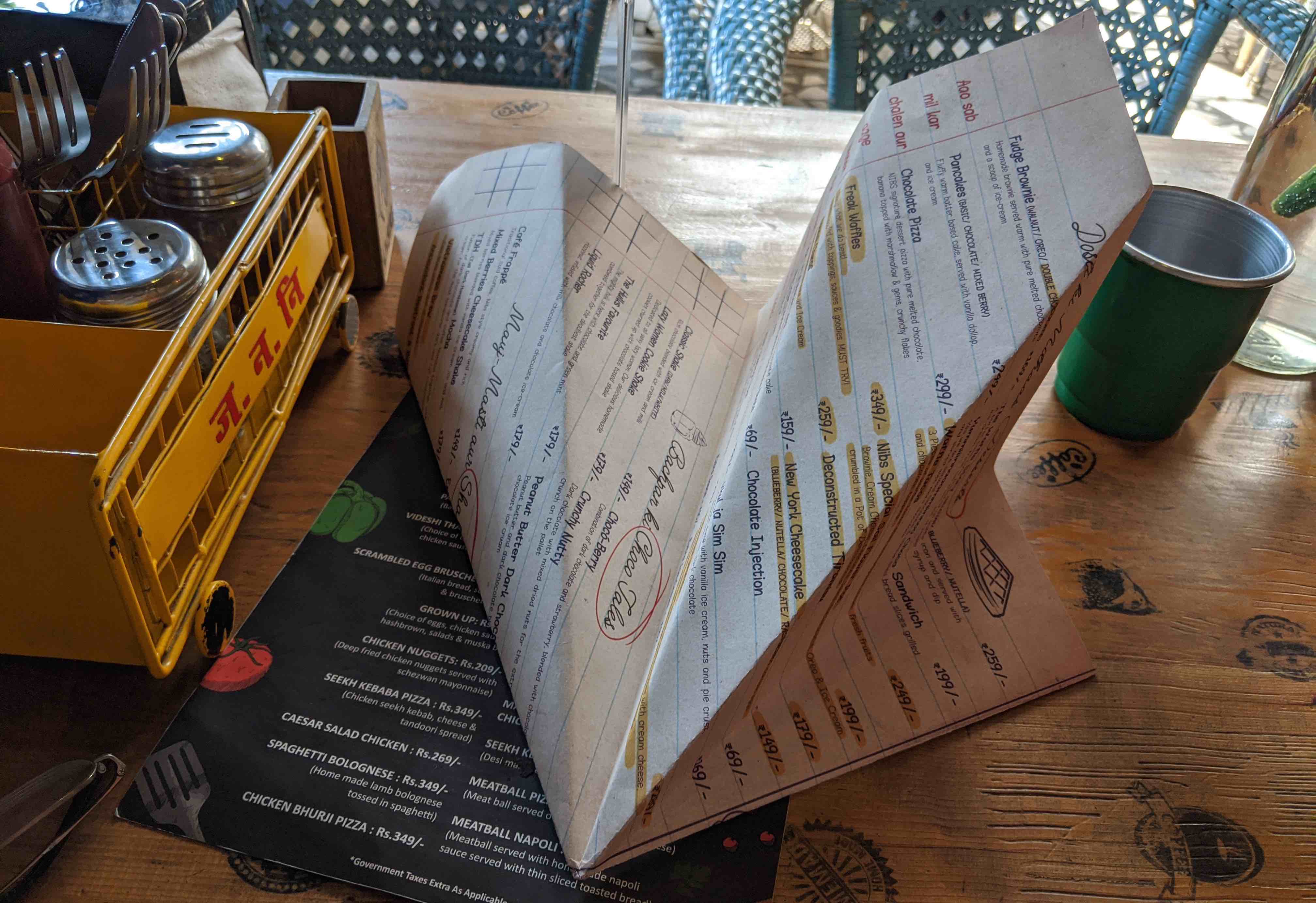 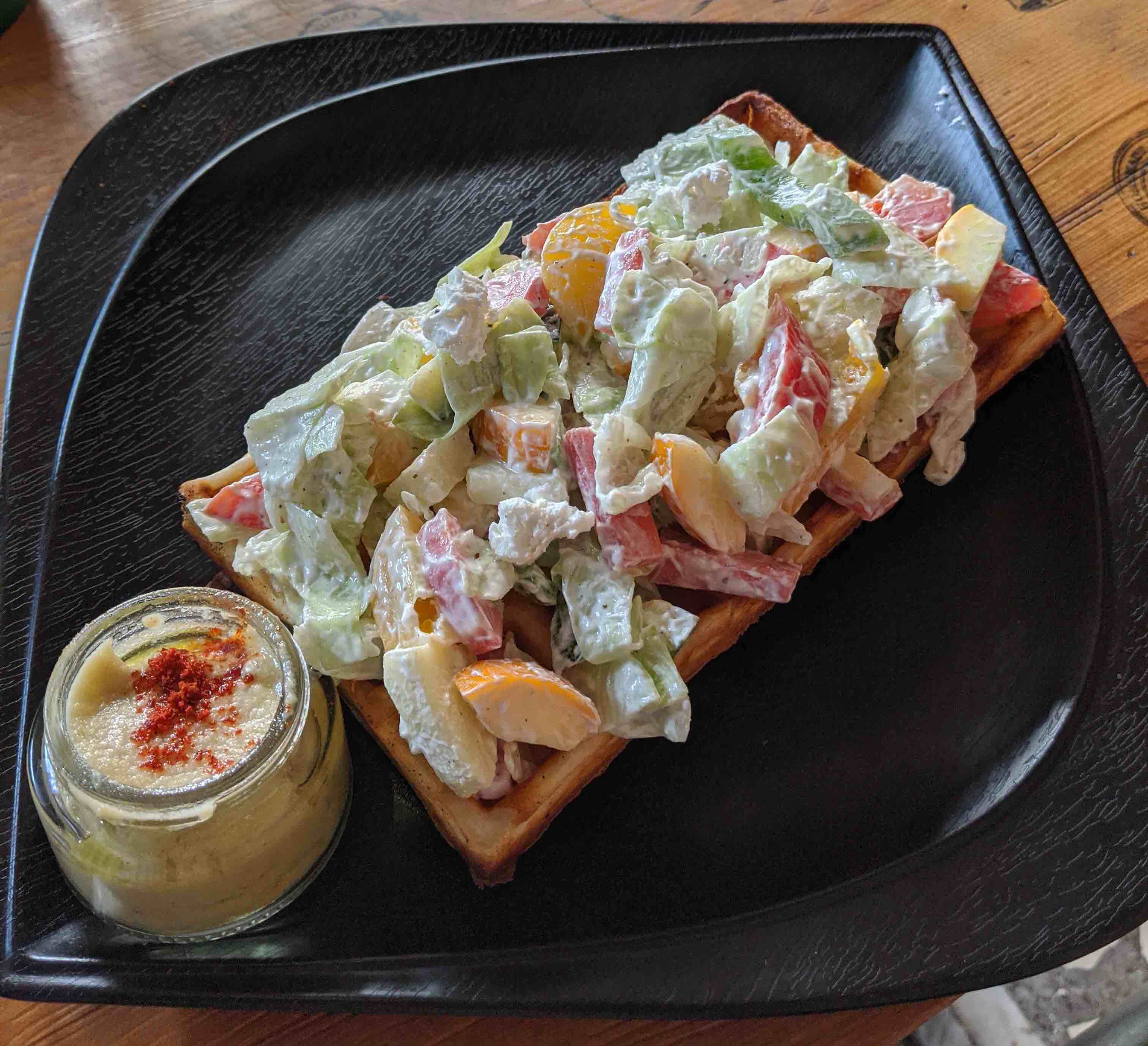 The cash and receipt box they had was very cute. 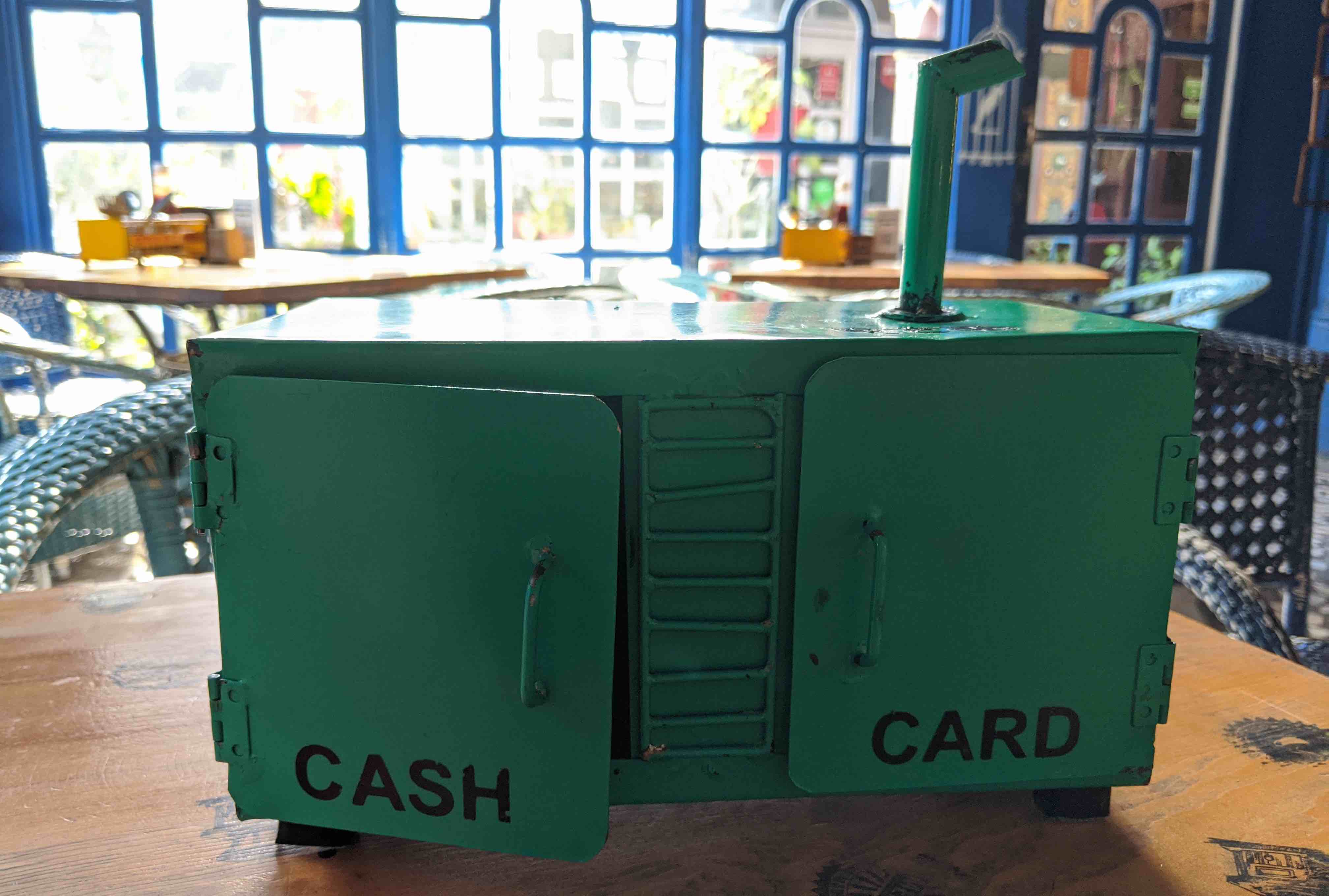 Around 1 pm, I decided to go to the Jaipur railway station, since I already spent almost two hours at the cafe. Lots of time to kill.

I arrived at the station with my printed ticket in my hand, excited for my journey. But what I saw on the overhead monitor at the entrance of the station stunned me. I was in denial for about 10 minutes, just randomly walking in circles since I didn’t know what to do.

My train was cancelled.

F$ck. At that moment, I wished that I was informed a day or two of the cancellation, but thinking in retrospect (and after some research) it seemed like same-day cancellations were normal for Indian trains.

My only option was to be a chance passenger and get on the next train without any reservation. I went to the tourist information counter and he redirected me to the ticket office outside the station. There were so many lines and I had no idea what to do.

Luckily, there was also another tourist I met, Josh, a solo traveller from New Orleans, who was on the way to Agra. There is strength in numbers so we tried to figure this out together. It was a happy coincidence as well that we booked the same hotel in Agra.

What he suggested was to try to book tickets online. With a stroke of luck, we were able to find some seats on the next train leaving an hour away. So we tried to book through the online portal, but neither of our credit cards worked, a common thing for Indian online portals.

With no option left, we went back to the queue and were able to purchase two tickets. At the very least we were gonna be on the train to Agra.

But there were two things that bothered us. 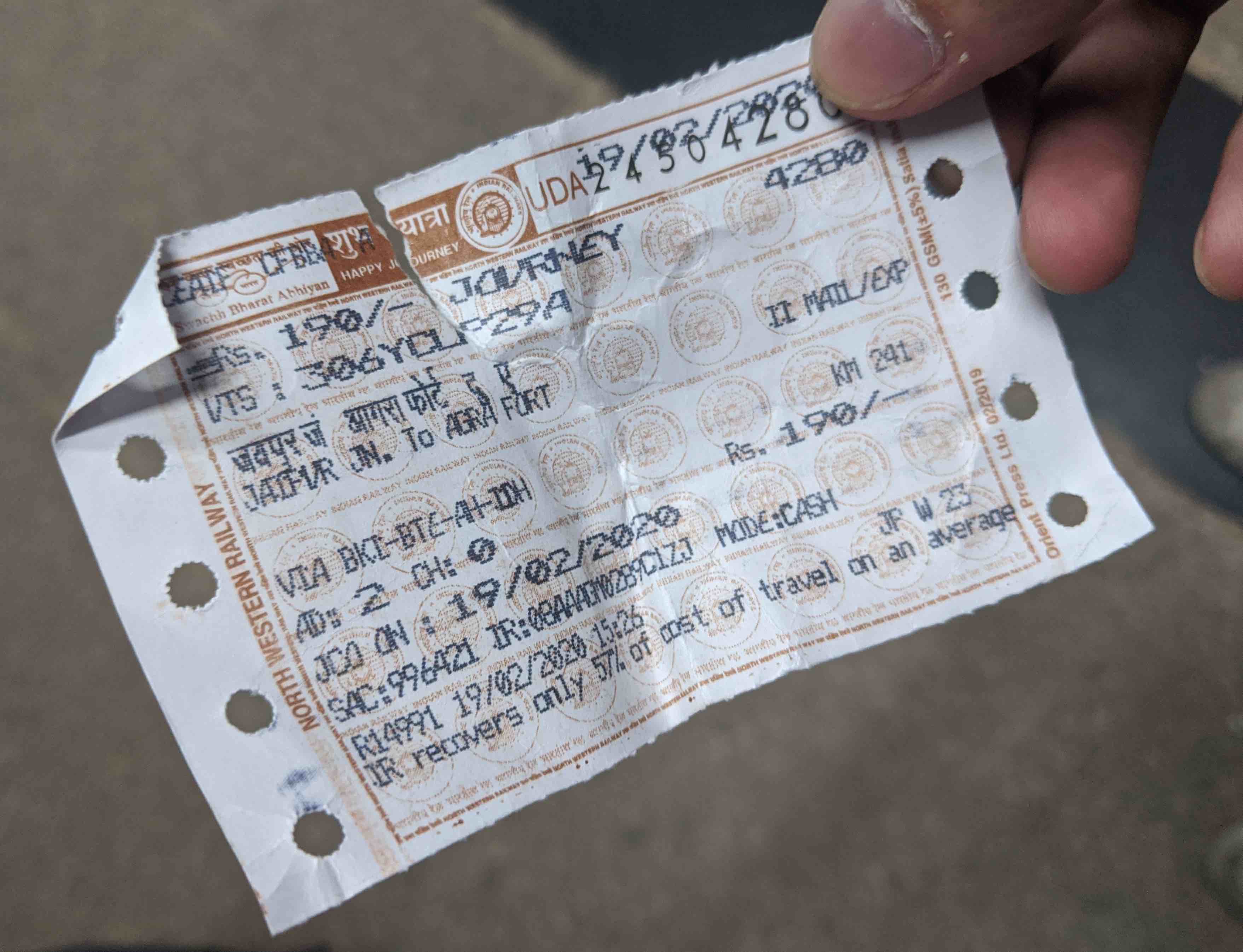 We arrived at the platform with some apprehensions. When we got there, we were taken aback because we finally realized that the tickets were for the lowest class of the Indian railways, the Unreserved class.

It was absolute chaos to just get on the train. A lot of shoves and elbows were involved. Add to that the fact that I had with me my massive red backpack and Josh had with him two bags, one of which was a trolley bag. With some effort, we were able to get on the train, but by the time we were inside, it was standing room only.

Some time after the train left Jaipur, a shrill scream silenced the murmurs of the passengers. Across the hall, there was a lady panicking, wanting to halt the train. She was trying to find the pull-to-stop lever while rushing through the crowded hall. Based on hearsay, her family was not able to get on board before the train left Jaipur station. She was unsuccesful to stop the train so she probably just descended on the next stop.

The Jaipur-Agra route only takes less than 4 hours, so it wasn’t that big of a deal to be in Unreserved. After about an hour or so, people had to go down so we were able to secure two seats. 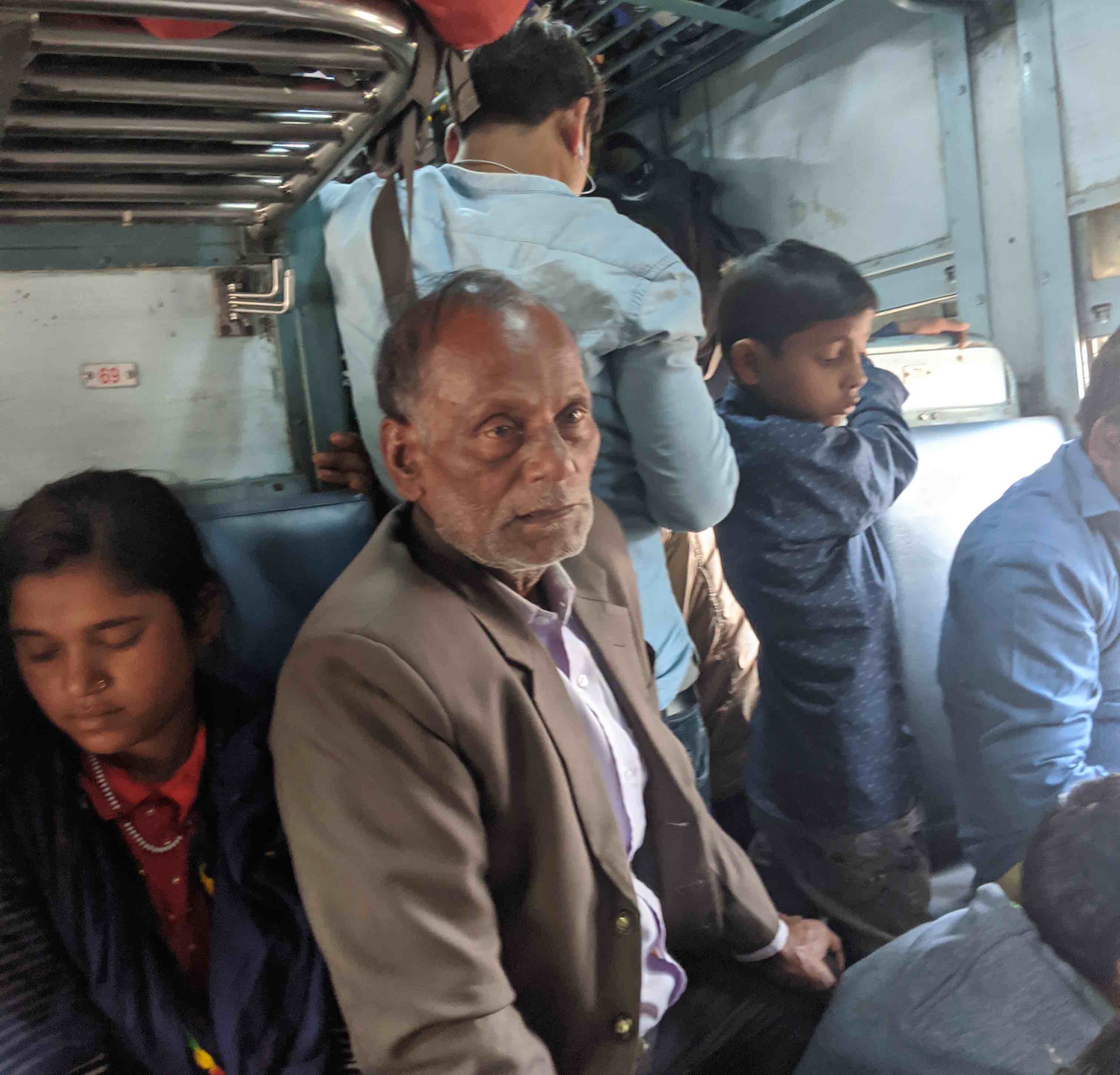 The experience was actually quite pleasant once seated. Josh got a seat on the upper bunk, which seemed quite uncomfortable since he kept on readjusting his position every 10 minutes or so, while I got one on the lower bunk, beside an Indian family. There was no air conditioning and the windows were open, so the breeze of the Indian winter was felt inside the train. At various stops along the way, vendors would approach the windows to sell some snacks and chai. Apart from a few stares since we were clearly out of place, it was a comfortable ride. 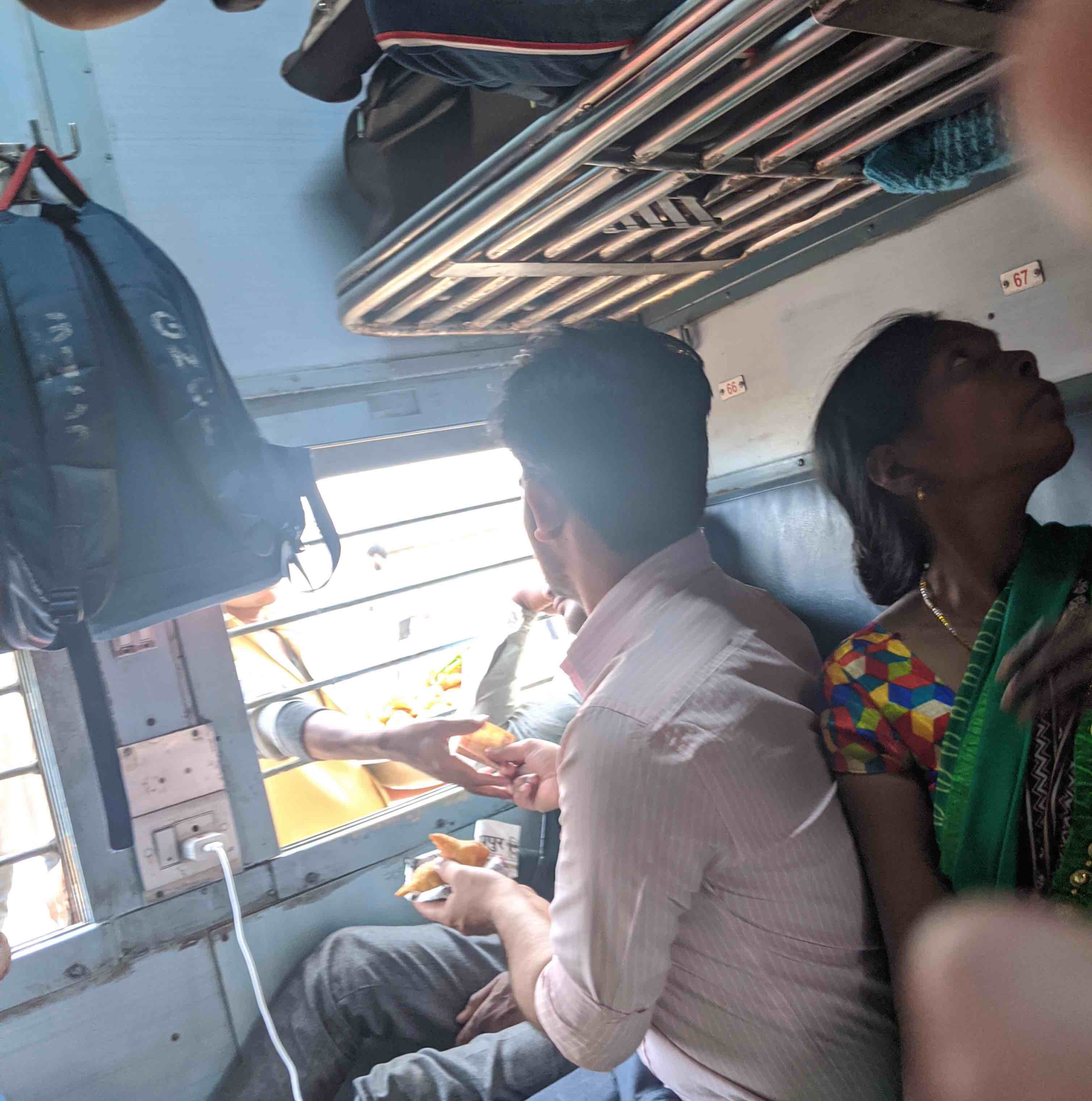 Dare I say I was lucky that my comfy train ticket got cancelled since the experience in Unreserved class was one of the highlights of the whole trip.

We were able to arrive at the hotel around night time, so I ordered some aloo gobi and banana lassi for supper. 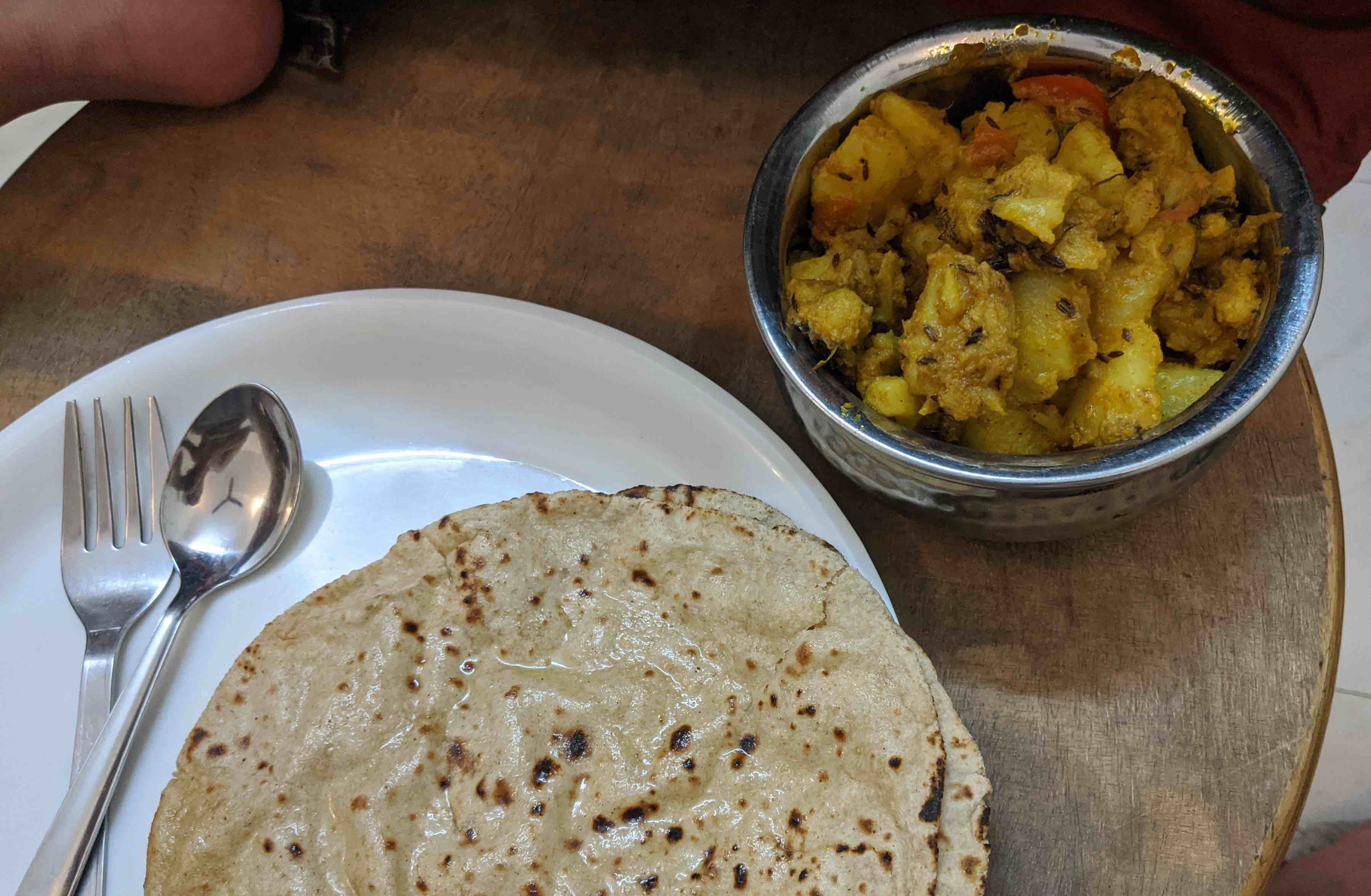 Very tiring day, as my shoes can attest to. 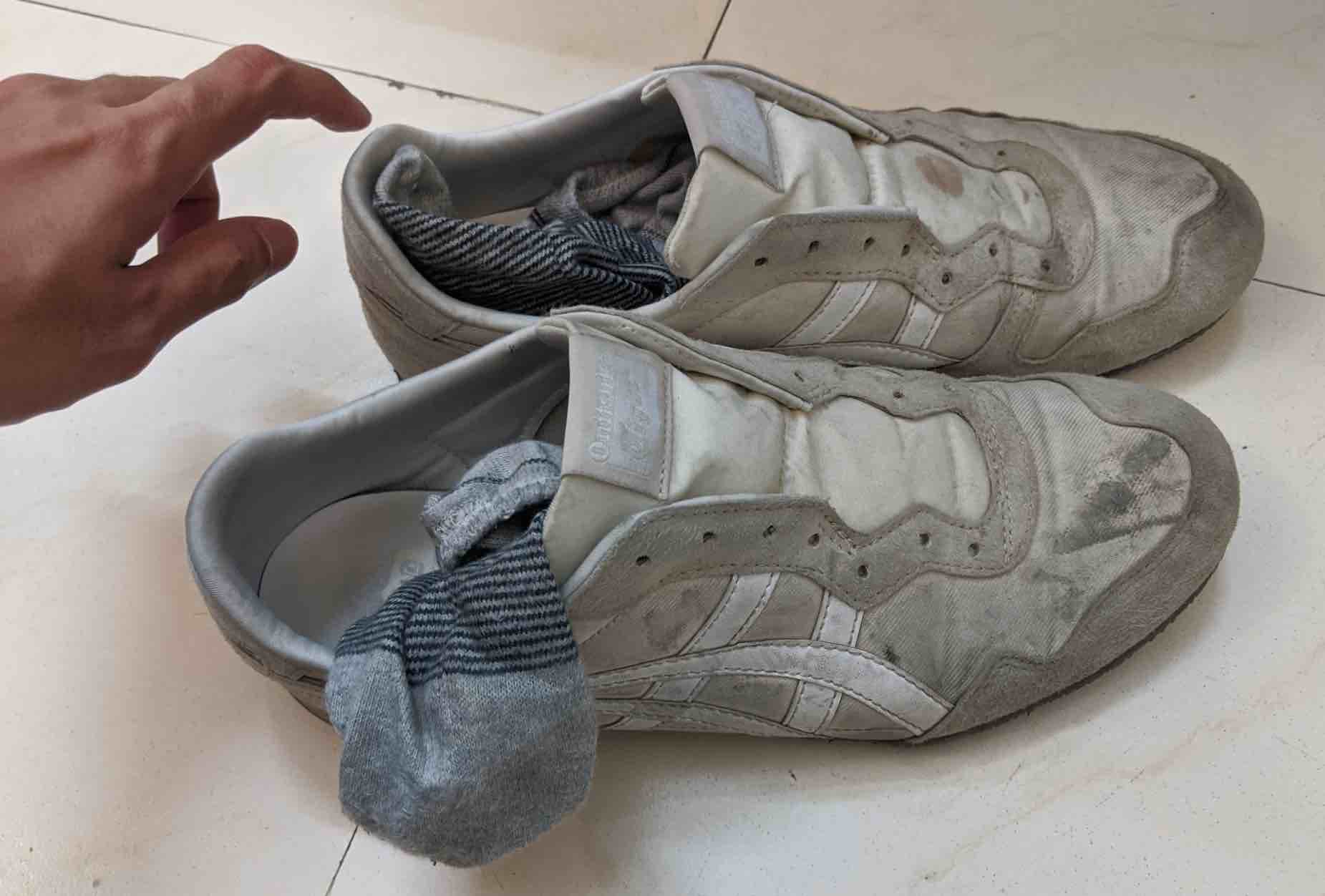 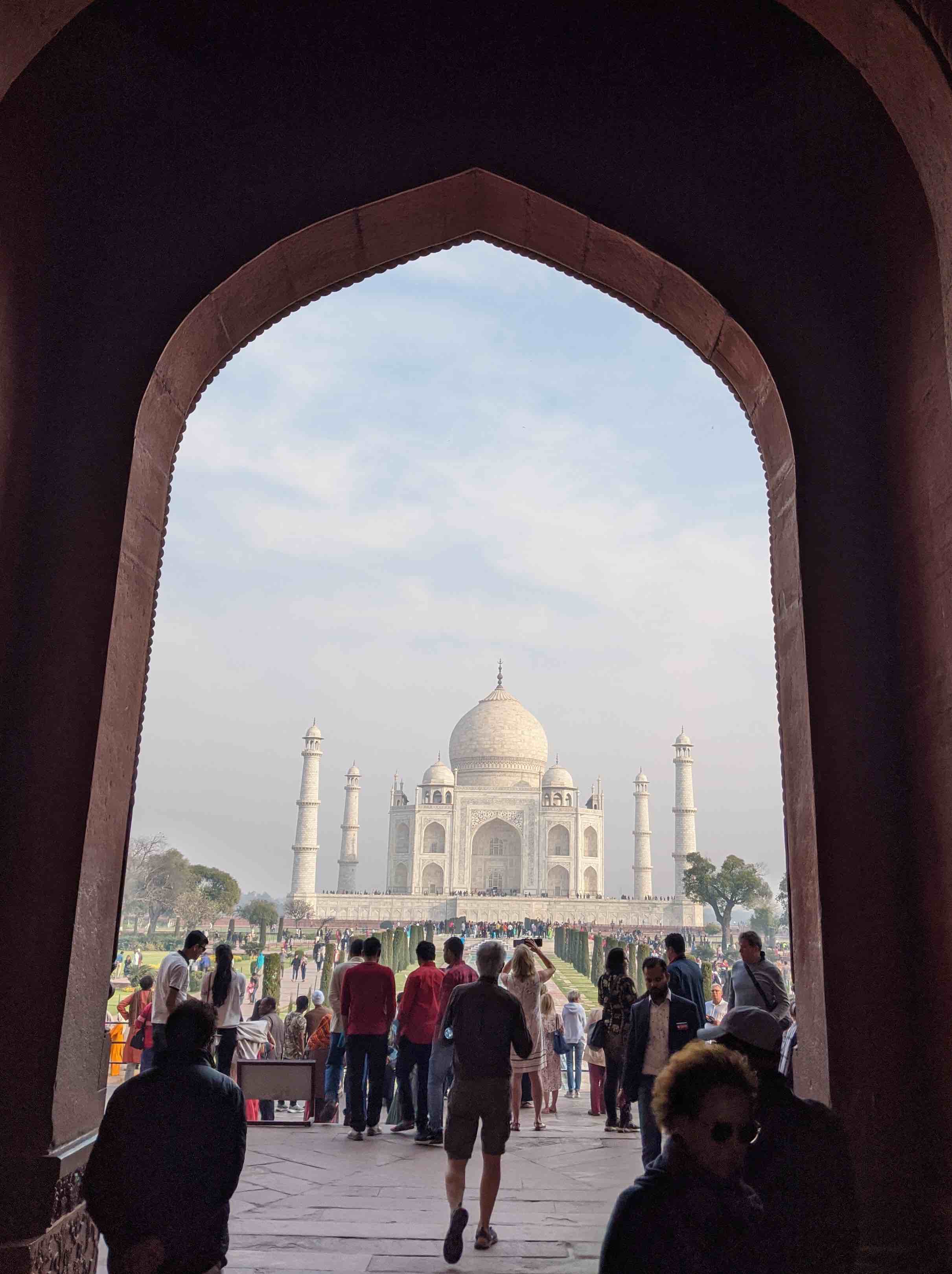 Behind the temple is the Yamuna River, a tributary river of the Ganges. 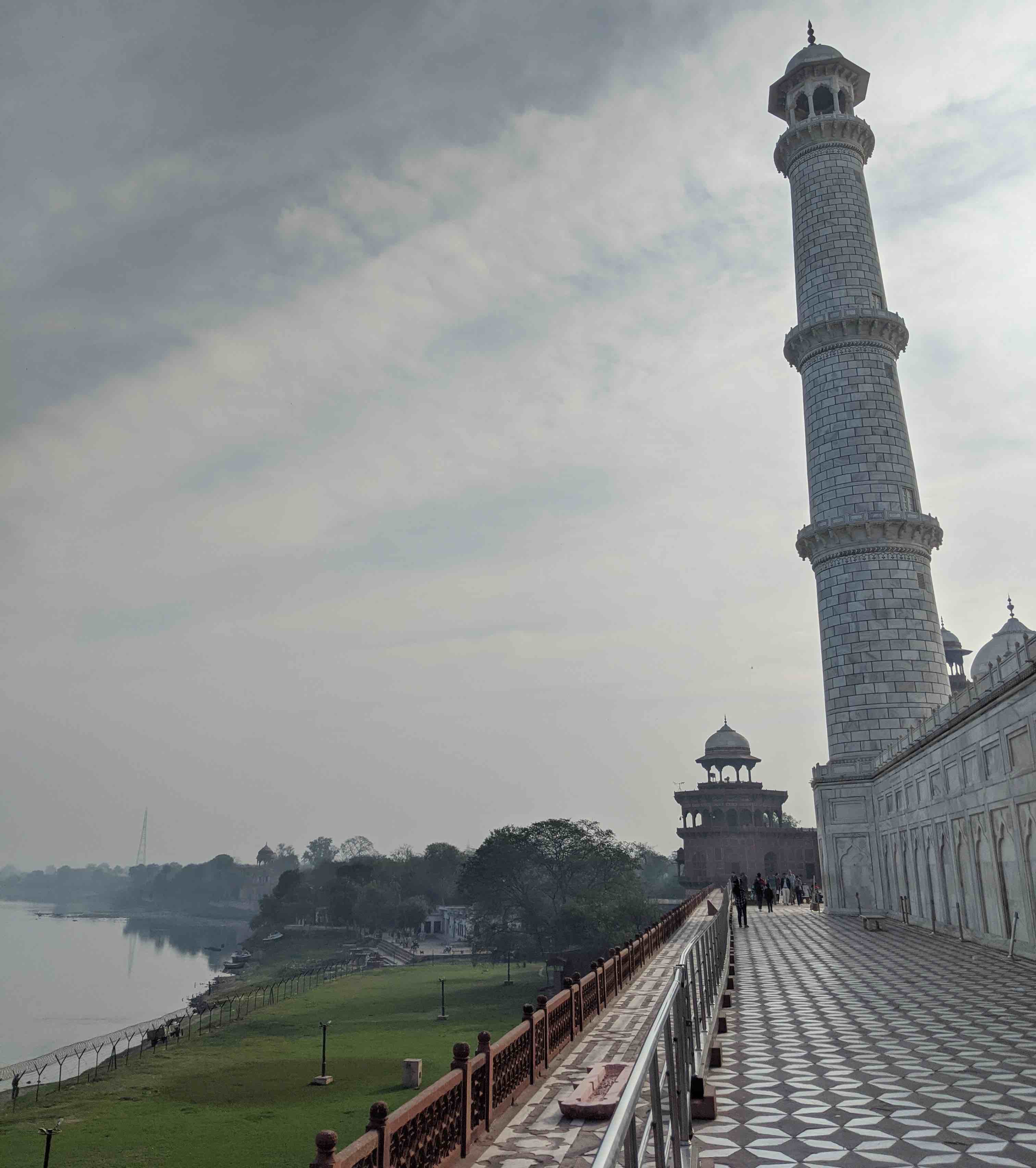 If you want to go to the actual mausoleum, you have to wear a layer to cover your shoes. Can’t have commonfolk shoes dirtying the Taj Mahal. 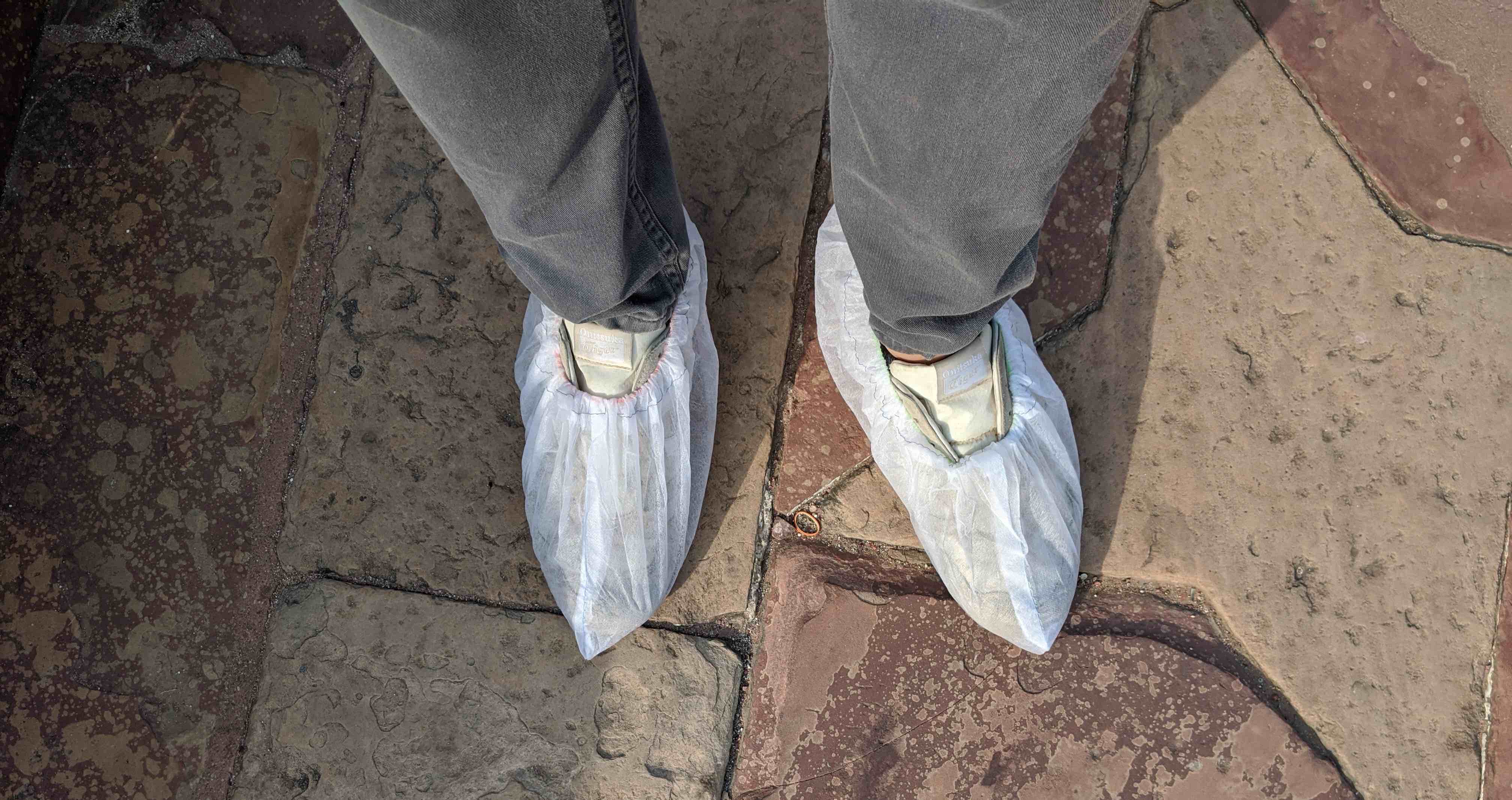 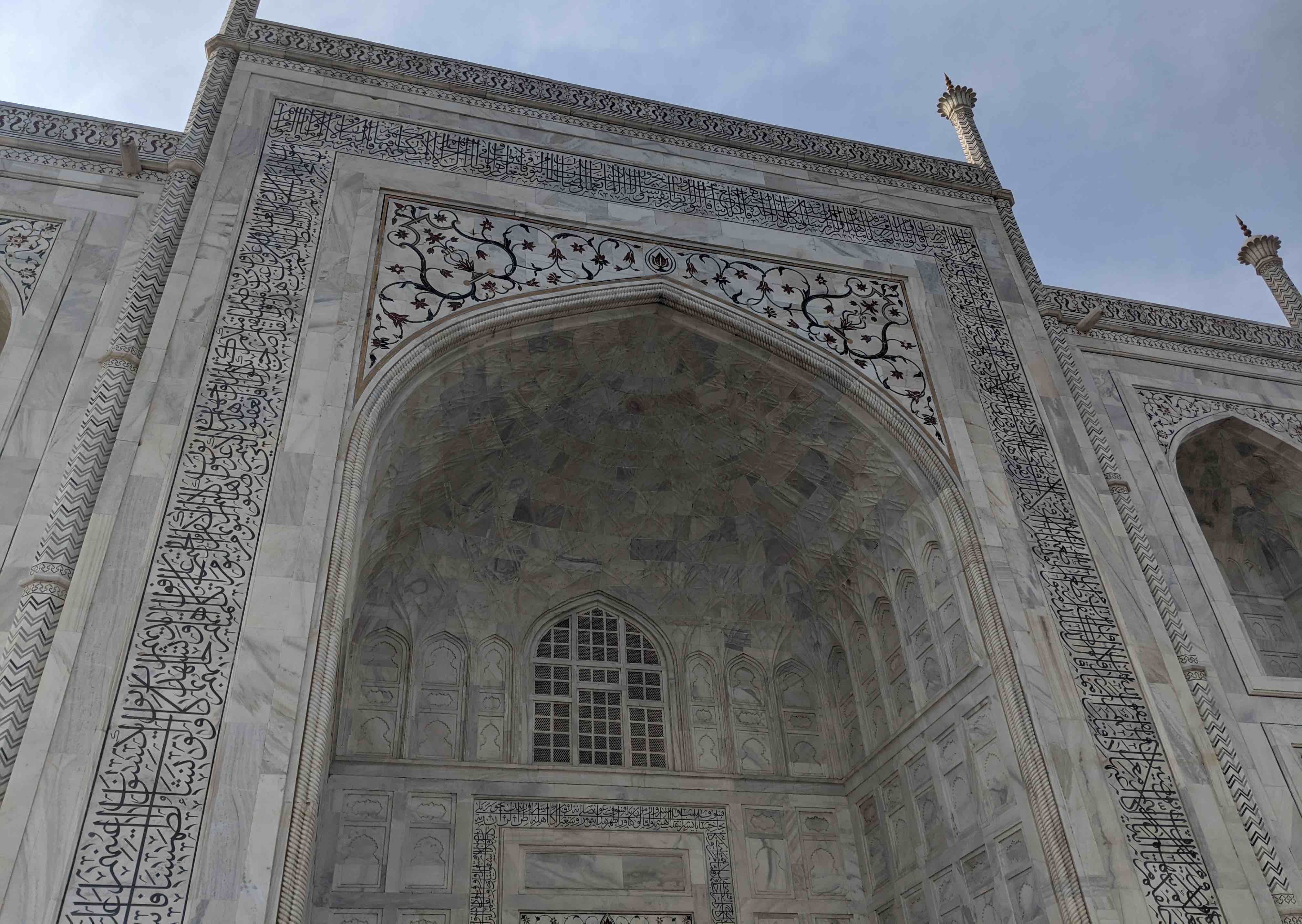 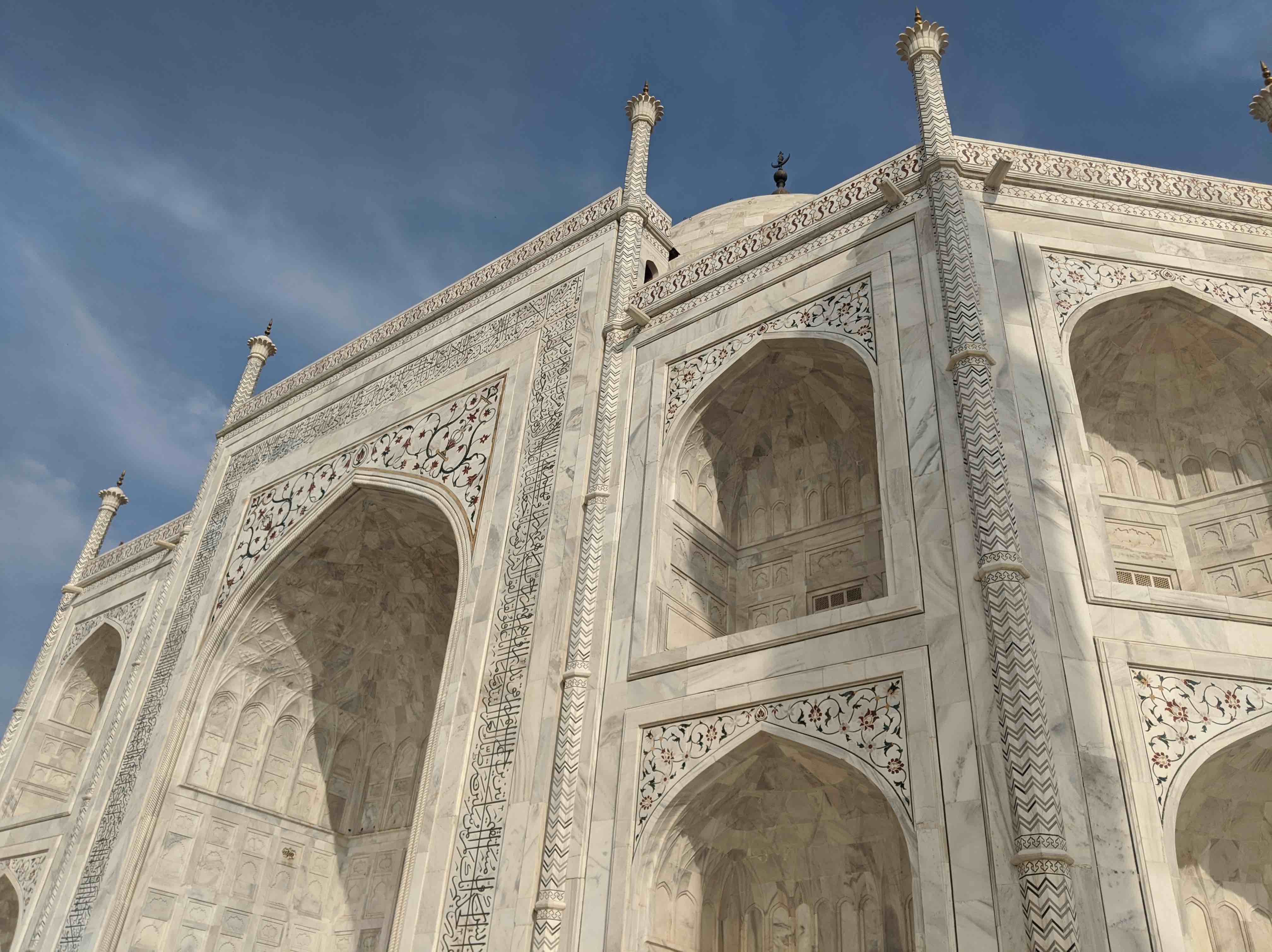 Zooming in on the structure, you can’t help but be amazed at the level of detail. 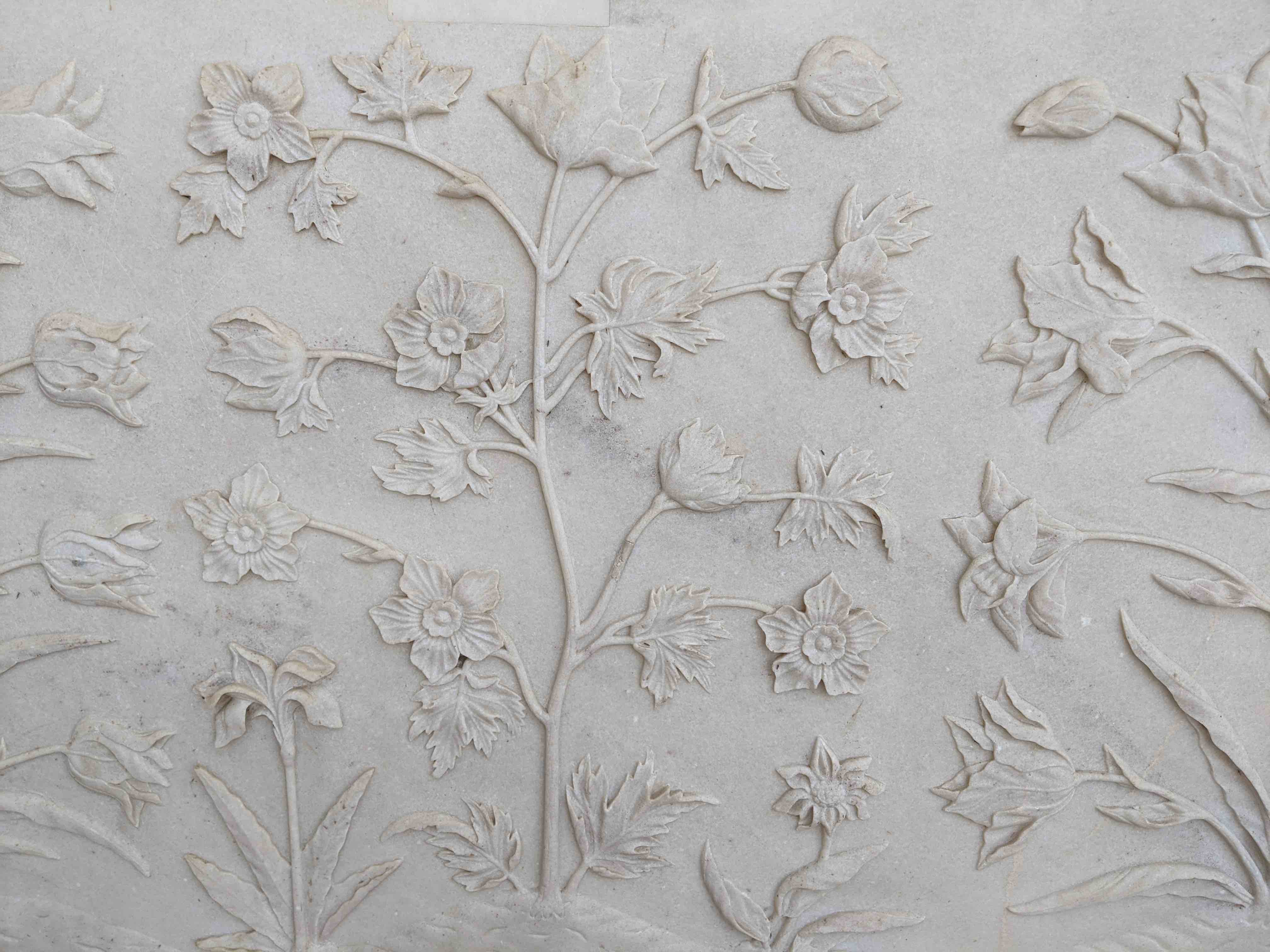 Inside the Taj Mahal are the tombs of Mumtaz Mahal and Shah Jahan. Taking pictures is not allowed inside.

Donald Trump was scheduled to visit the next weekend, so there were lots of laborers and sweepers busy with the upkeep in the courtyard. 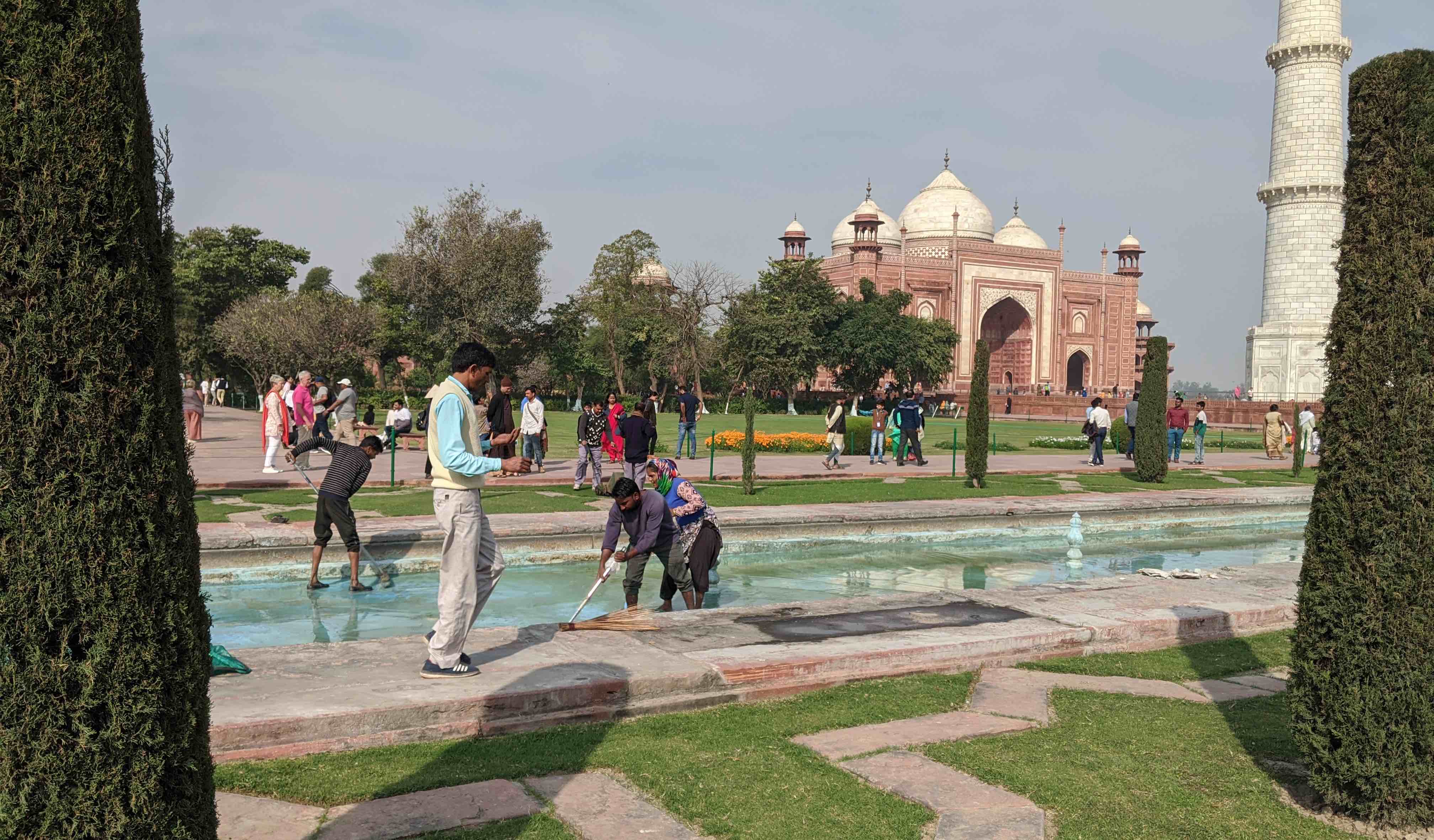 All in all, my Taj Mahal experience was very memorable and worth the hassle and stress of the cancelled train. I was expecting the Taj Mahal to be awesome, but it definitely exceeded all my expectations. 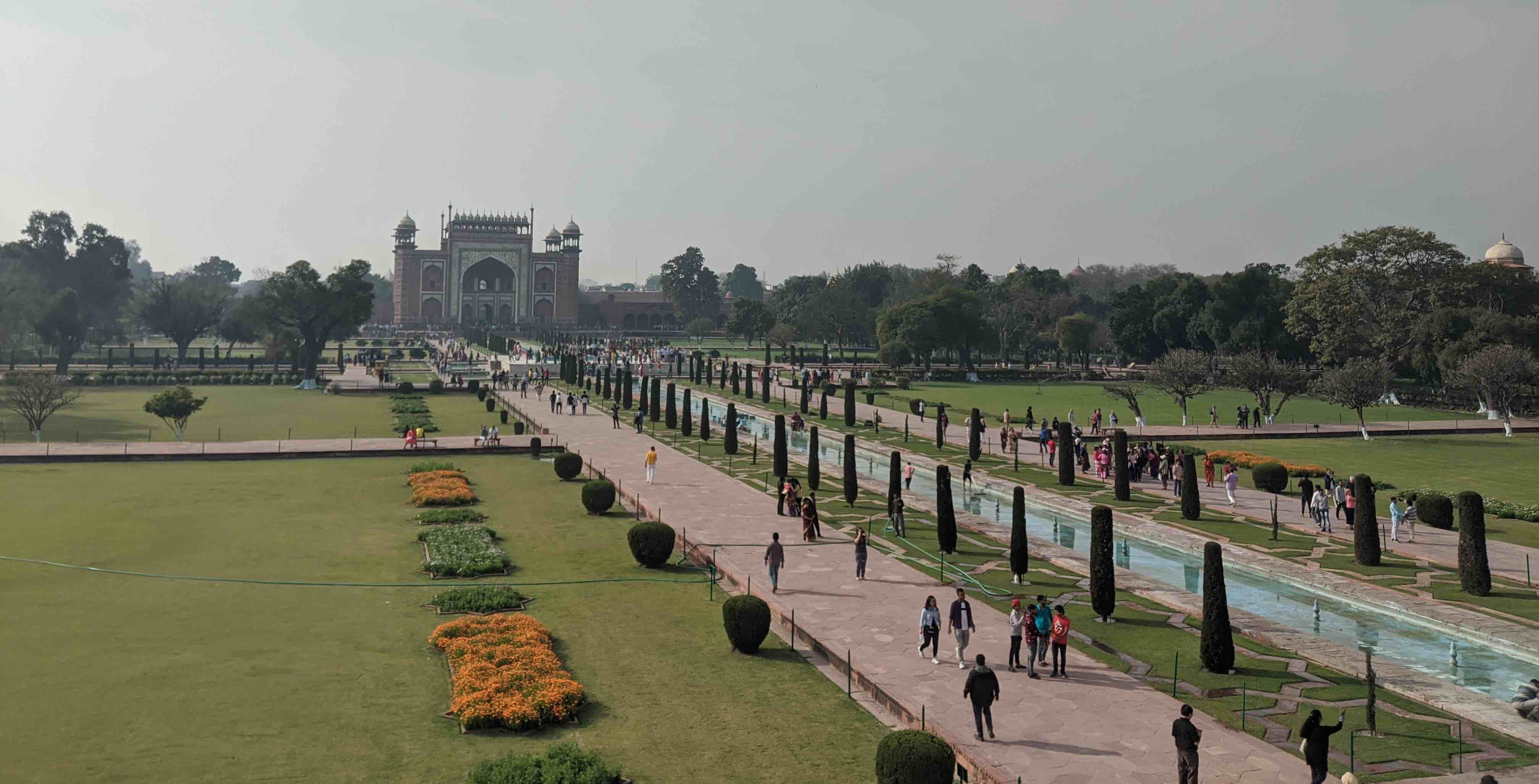 With my only goal in Agra completed (and one of my bucketlist items ticked), I left the city on the same afternoon.

My original plan was to take an overnight train from Agra to Varanasi, but seats were already sold out when I was doing my planning. Researching a bit, the next viable option was to take a train to New Delhi and catch a local flight to Varanasi. Though a bit on the expensive side, I proceeded with that plan since it would also save some travel time. But if I were at this junction again, I should have considered another option: I could have taken a sleeper bus to Varanasi, a suggestion by my rickshaw driver in Agra. 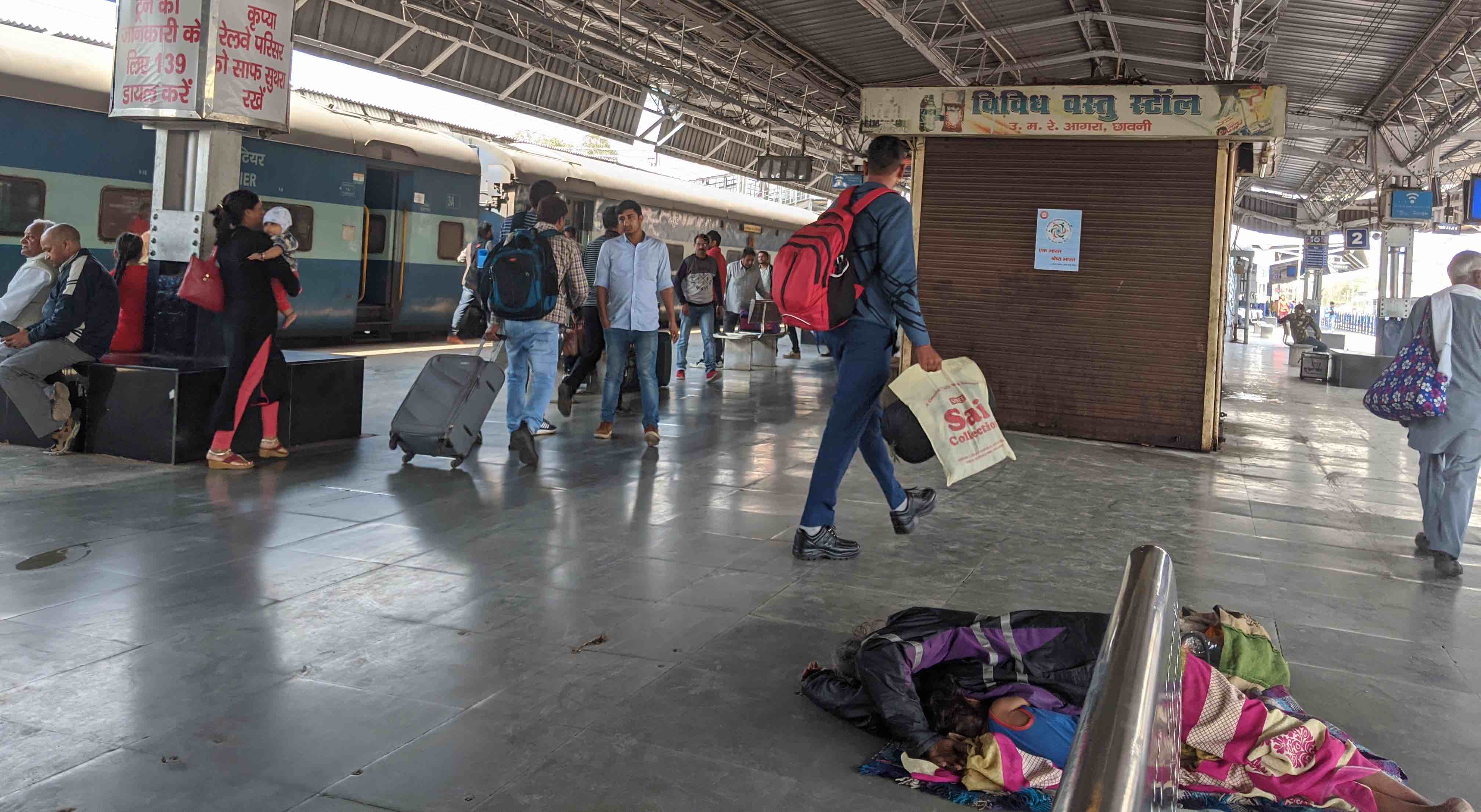 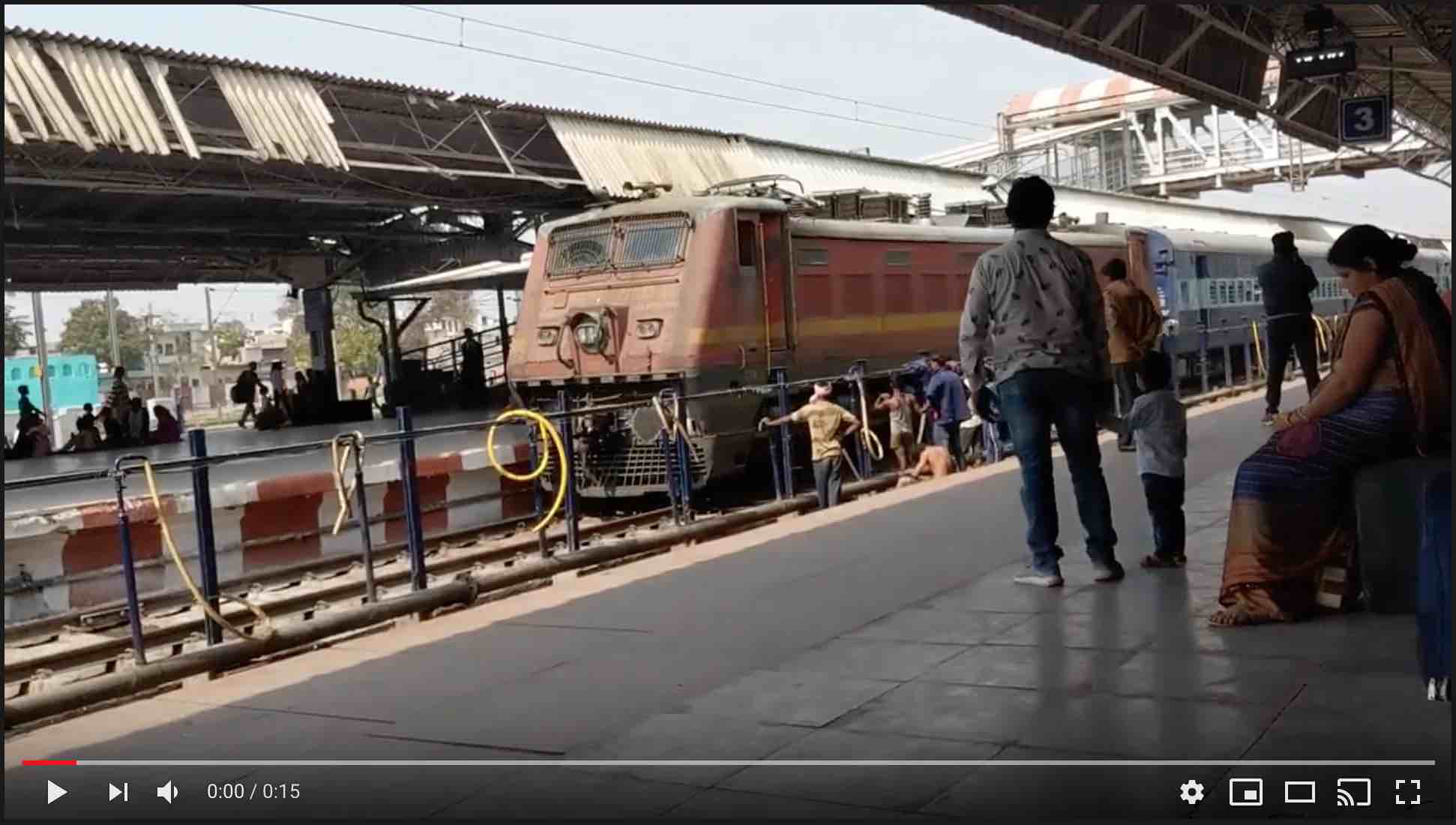 I booked a bunk on the sleeper class for the Agra - New Delhi train ride. It was very comfortable since the air conditioning was on at full blast and a comforter and pillows were provided. I was able to doze off for a bit. However you do need to do a bit of gymnastics to get on the upper bunk since it’s quite high and the ladder is not very handy. 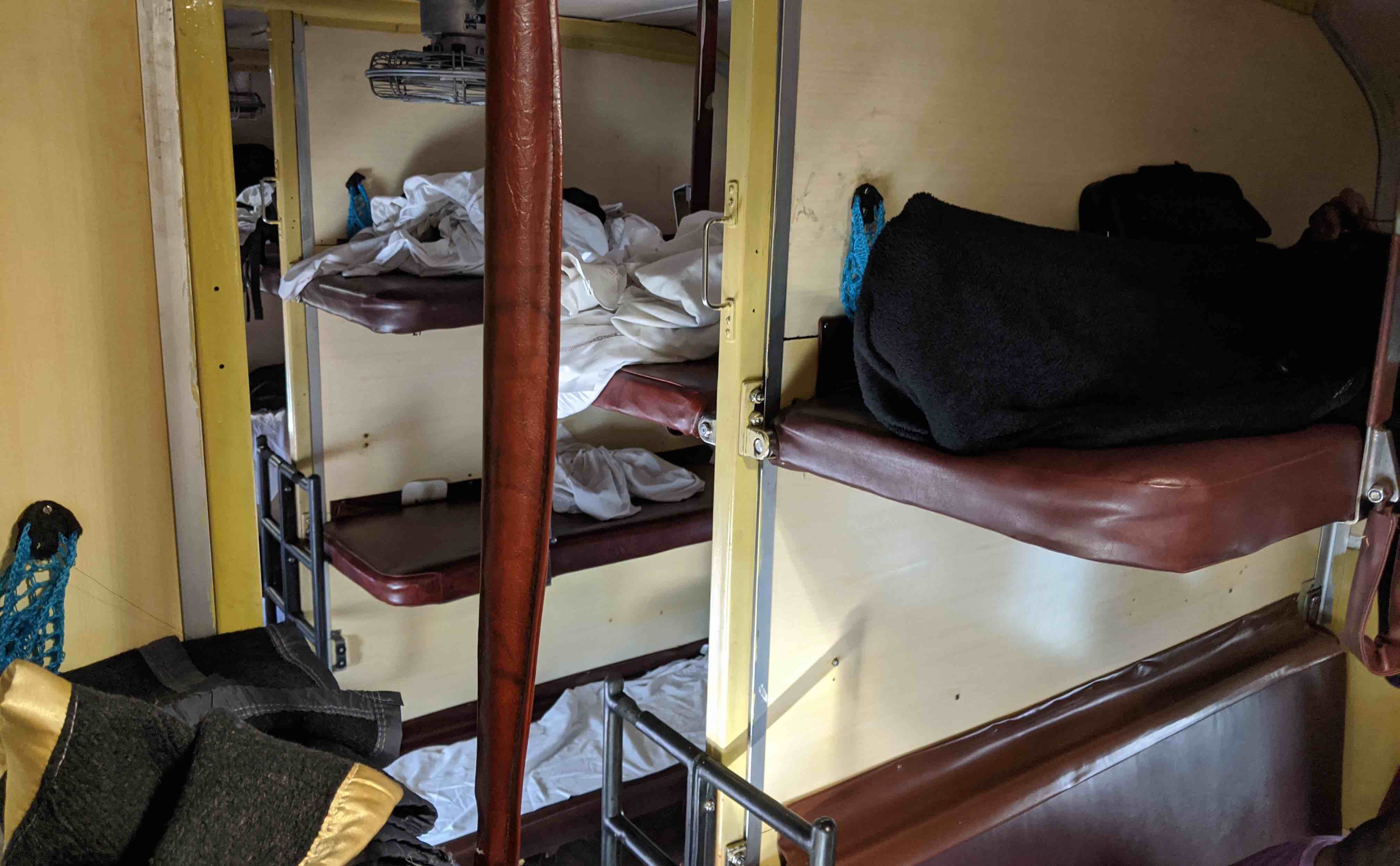 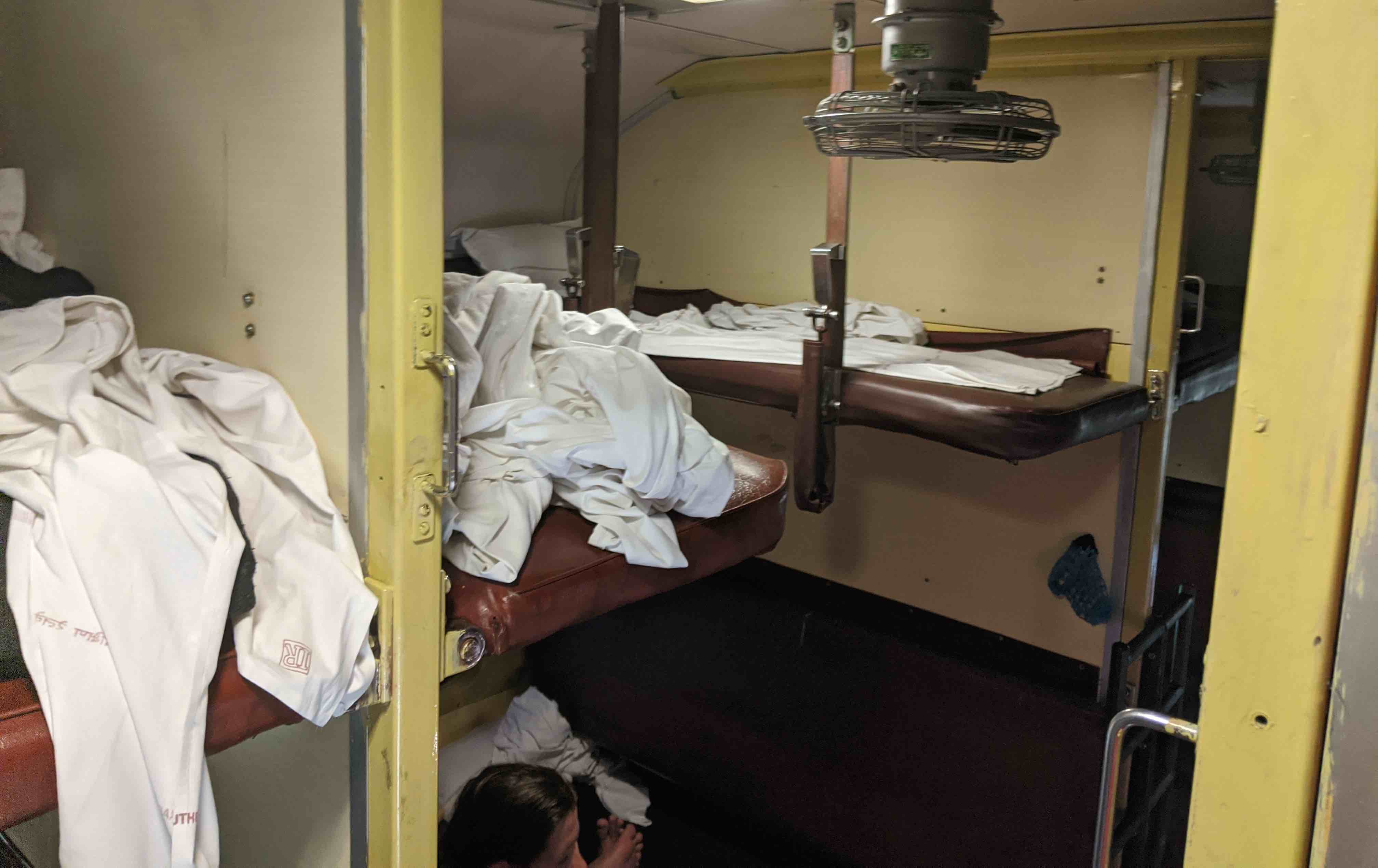 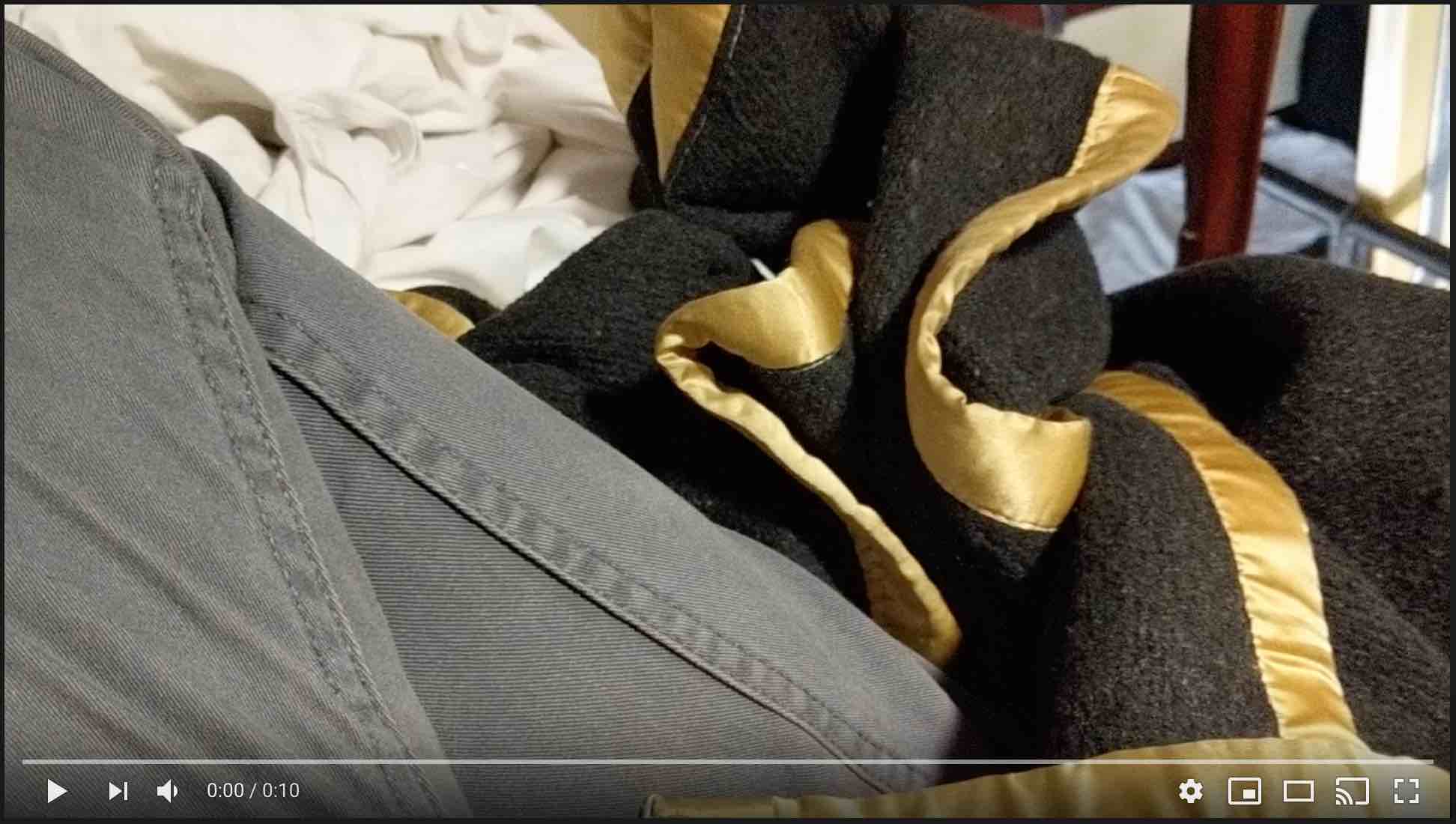 After a few hours, I arrived in New Delhi. I couldn’t do much since I arrived a bit late, so I just ordered butter chicken for takeout and ate it in my room. 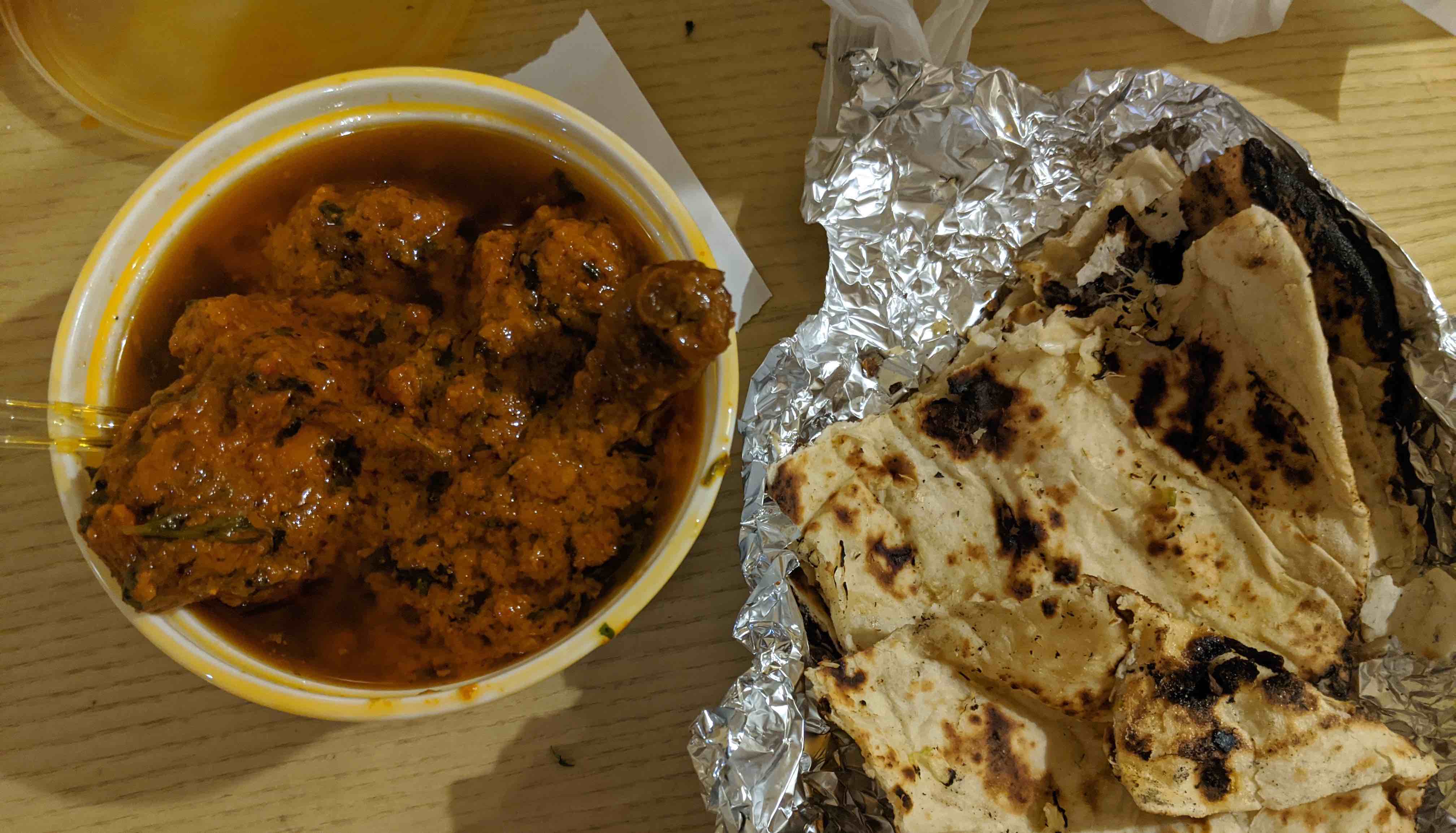 Oh, how I regret eating that butter chicken as it gave me the proverbial Delhi belly.