I have always wanted to go to India. Something about the subcontinent fascinated me to no end.

I fell in love with Indian food during my stay in Singapore. I had a vegetarian Indian housemate who would always cook her own food. She would always cook a plate for me to try, and it was always so wonderful. I also happened to meet a few Indian friends, and we would always have dinner out in Little India to have some delicious thalis. Geez, I remember that wonderful Keralan shrimp curry at Premaas. Yum.

So when I had the opportunity to take a 10-day leave from work during my two-month “working” trip early this year, it was a no-brainer: India here I come. I was supposed to go to Ladakh with a friend for the trip, but shit happened and he wasn’t able to join me, so I had to rush a solo itinerary just two weeks away from my flight to Delhi. Since it was my first time in India, and since I was solo, I was not confident to go to Ladakh on my own, so I settled on the usual tourist trail, the Golden Triangle: New Delhi, Jaipur, and Agra. I’ll leave Ladakh for some other trip in the future, when I gain more traveling experience points. 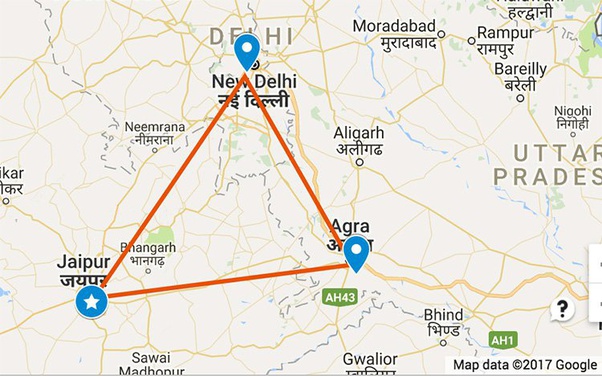 But there was a fourth city in India that I needed to see, a city I just had to squeeze into my trip because I would be remiss not to: Varanasi… but that’s the subject for another blog post. 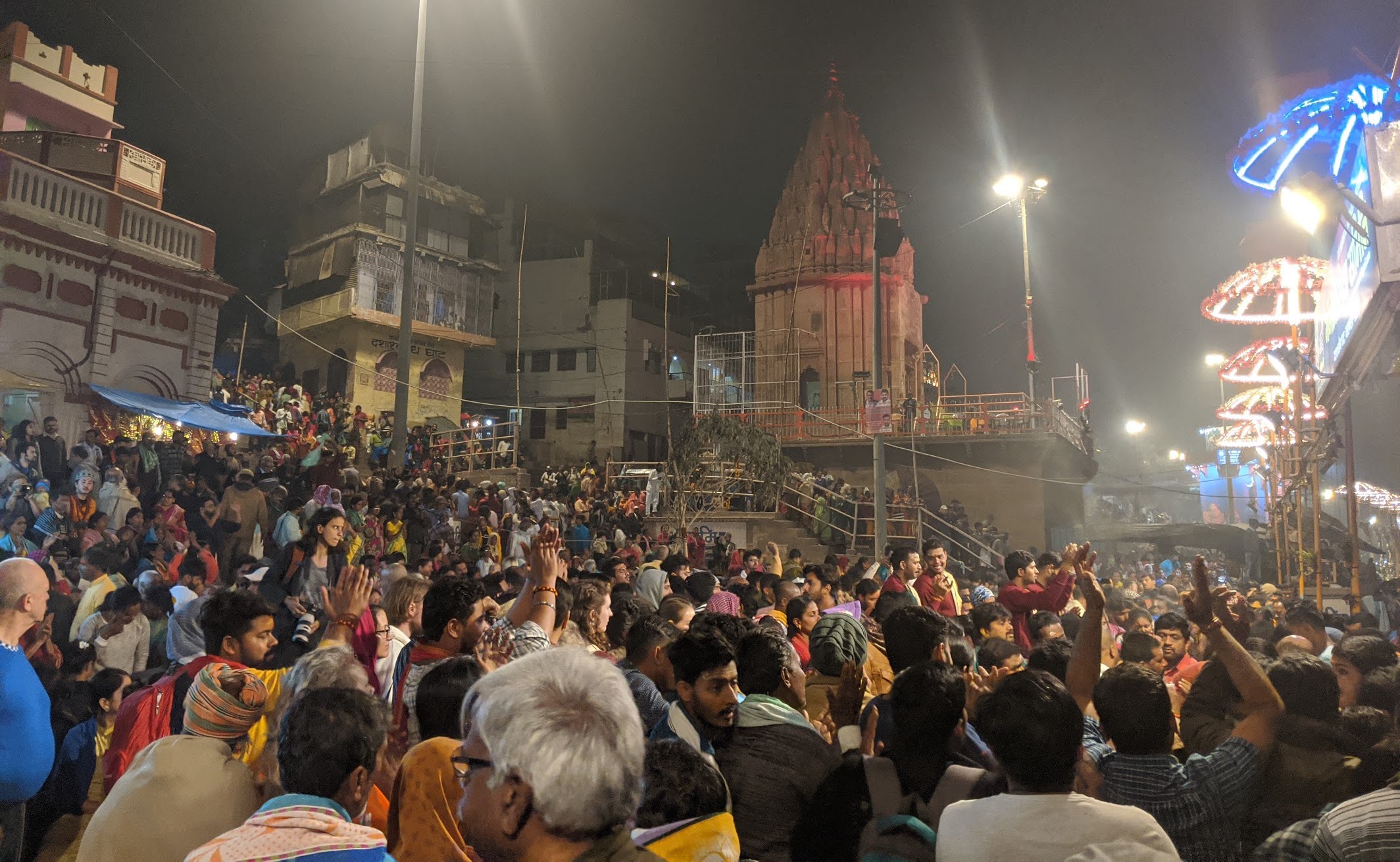 So there’s that. My final itinerary was the trail New Delhi - Agra - Jaipur - Varanasi - New Delhi, an itinerary finalized in just a couple of days.

I arrived in New Delhi with minimal sleep and a nasty headache. I started my trip at Chiang Mai then connected through Bangkok, where my flight to New Delhi got delayed by an hour or two. I have always had difficulty sleeping on planes, so I virtually had zero hours of sleep upon arriving in India.

First thing I always do when I get to a new country is to get a SIM card, and I advise others to do the same thing. Having access to the internet in a foreign land is akin to having a virtual tourist guide. You won’t get too lost because you have GPS, you’ll be able to see recommended places to visit and eat with some online guides, etc.

So there I was at the SIM card booth at the airport. I purchased a SIM card with unlimited internet and paid the charge. I had just withdrawn money from the ATM so my bills were large. This is where I saw modus #1: giving out the wrong change. This is not an isolated case as I had a similar experience in Jaipur, so I advise to any prospective traveller to India: always count your change!

My SIM card was going to activate at night, and I arrived around lunch time, so I had to rely on offline maps to get to my hotel. I had to ride the Airport link to get to the city center and then walk to my hotel. 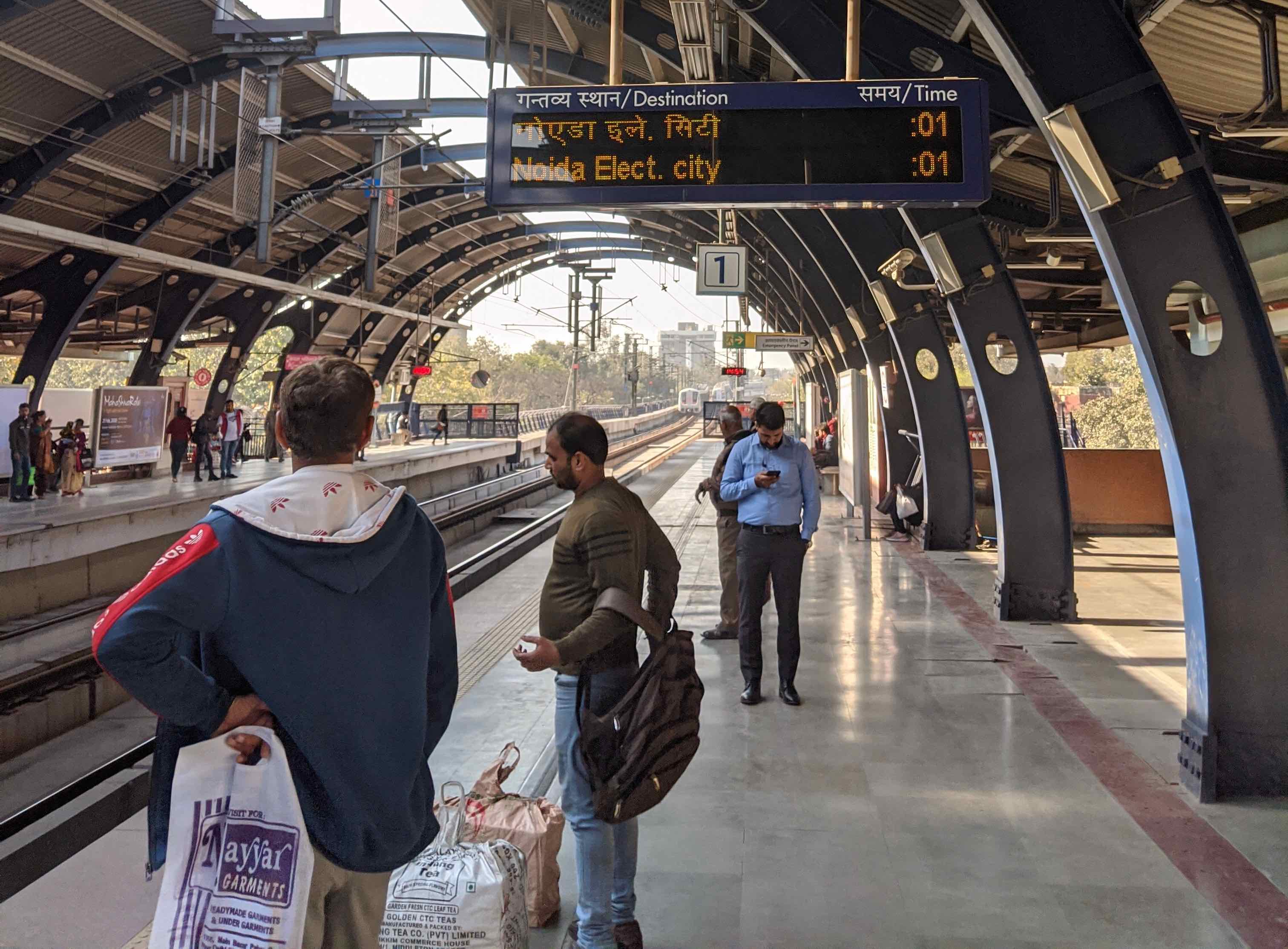 Navigating New Delhi without GPS is not the easiest thing to do as there are some streets that don’t look like streets and some alleys are blocked. And also there are animals on the street.

I was a bit lost, looking lost at a chaotic outdoor market, and a rickshaw driver noticed me as I was sticking out like a sore thumb with my massive red backpack. This is where I encountered modus #2: free autorickshaw rides. 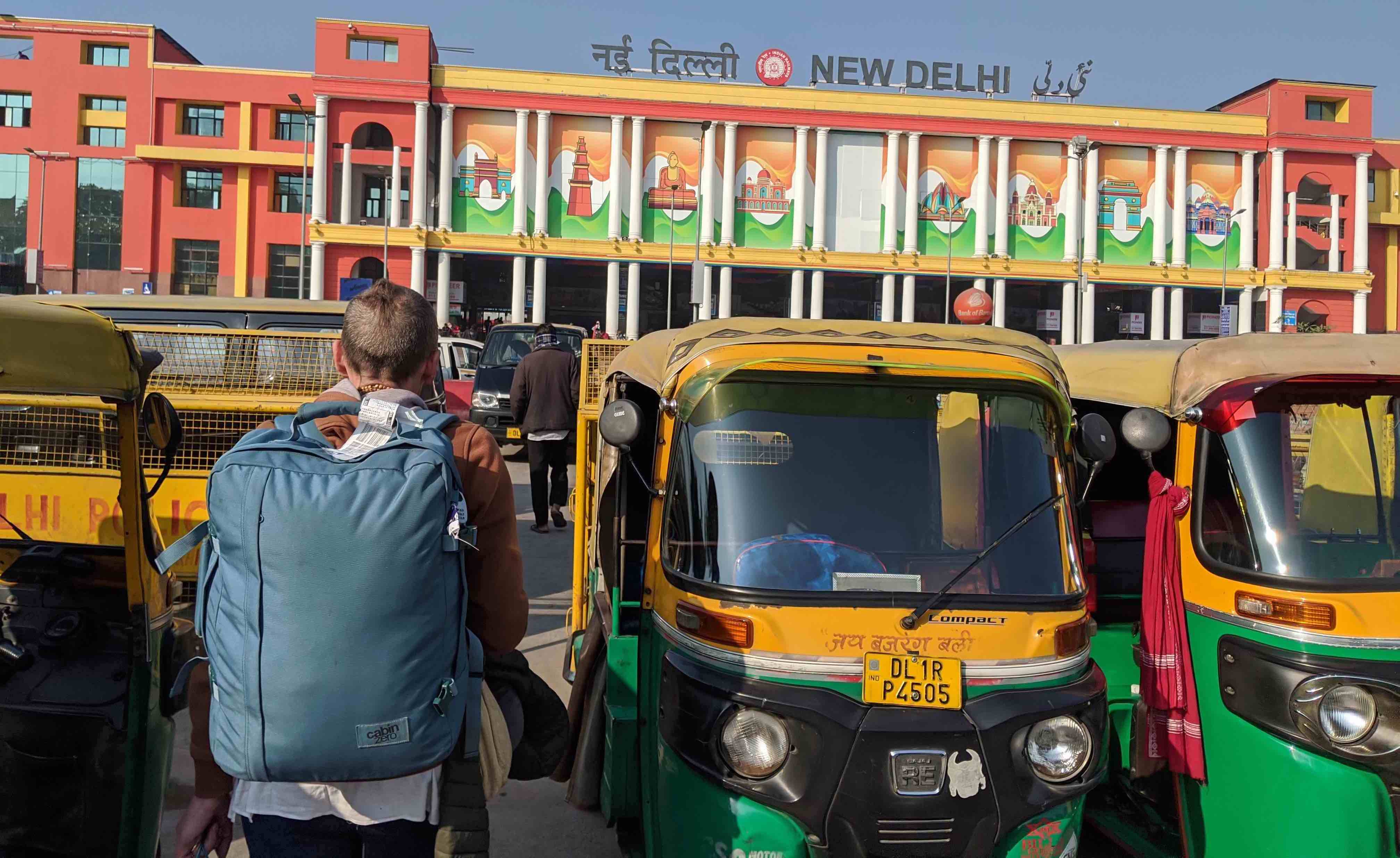 He asked me where I was going and offered me a ride to a nearby tourist information center for free. As I was already quite tired from my flight and my search for the hotel, I agreed… but with reservations. 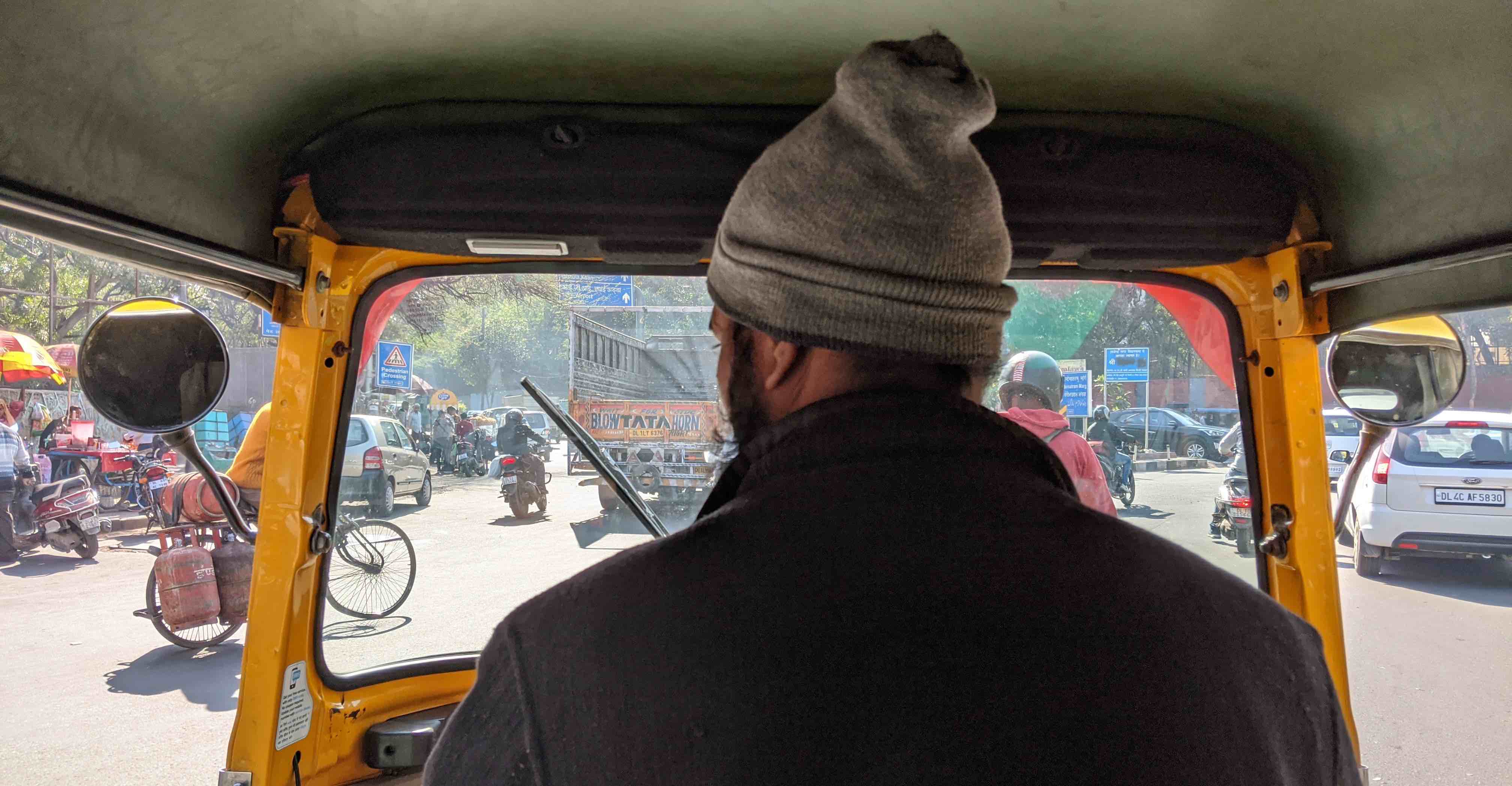 The driver was very friendly, and as agreed upon, he did not charge me for the ride. I entered the tourist center and I was greeted by a friendly guy who offered me some chai. I just wanted to know where my hotel was, but he wanted to tell me all about the tour packages he was offering. I thought, what’s the harm? but then it got very long-winded. There was zero probability that I was getting a tour package as I already booked everything beforehand, which I informed him of, but he was insistent. I think I wasted about an hour just listening. I had to lie that my friend was waiting at the hotel just to get out of the tourist center. In the end, I got my directions to the hotel, got there safely. No chai though. Oof. 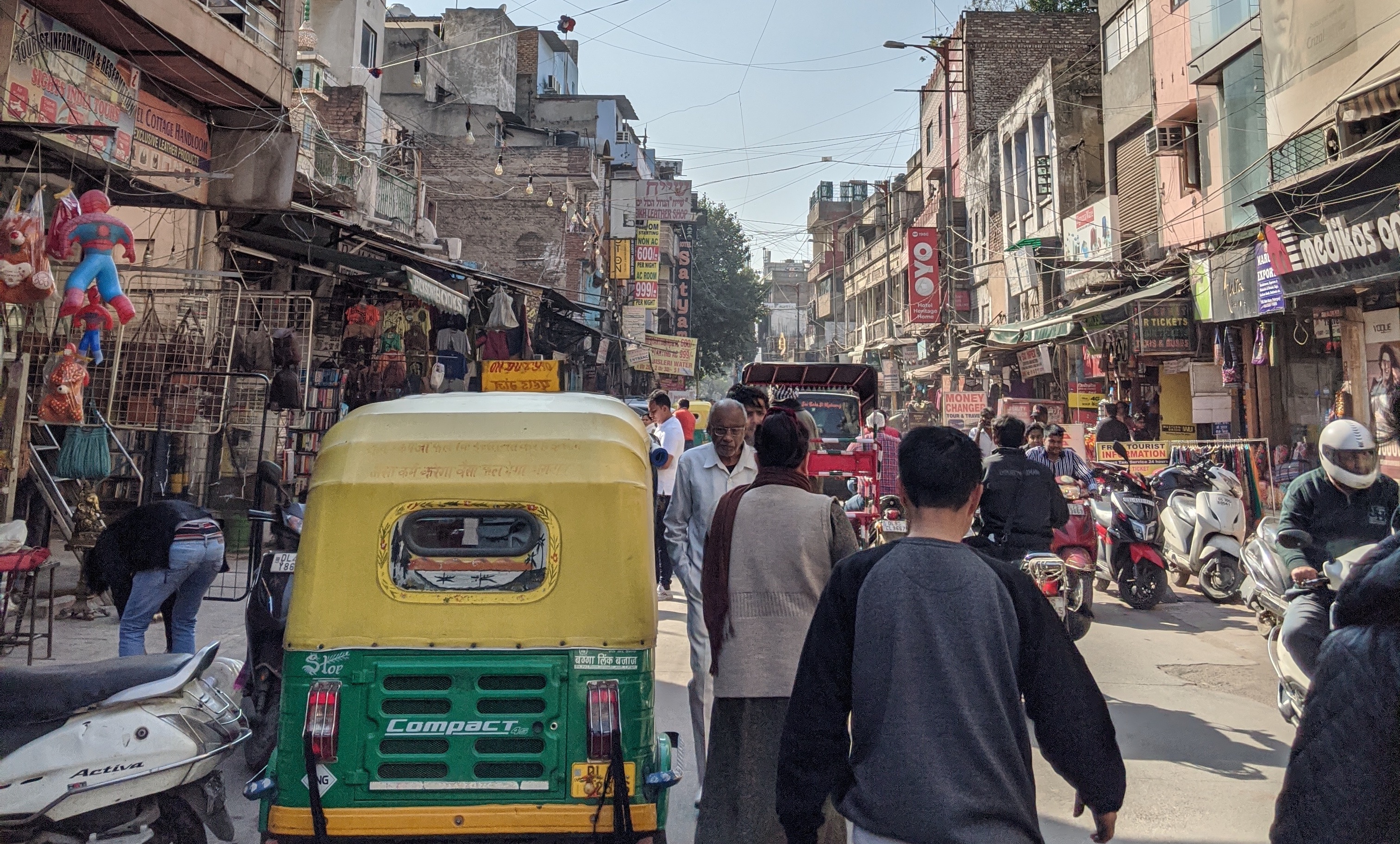 Bottomline is, be vigilant and assertive. Life is hard in New Delhi. There are lots of opportunistic people, and so you have to be cautious.

In total, I spent three days in New Delhi: two at the start of my trip and one before my flight to Varanasi. Let me share some thoughts on the things I did while I was there and give some more tips for prospective travellers.

New Delhi is a very old city. Lots of temples, mosques, and tombs for all you history buffs out there. Coming from Chiang Mai prior to New Delhi, I had a bad case of temple fatigue. But I was pleasantly surprised when I got to India since it was so different from temples I’ve been to elsewhere. Though India is predominantly Hindu, most architectural wonders are actually of Muslim influence.

On my first day in New Delhi, I planned to go to Jama Masjid, one of the largest mosques of India. I looked at the map, and it seemed my route to get there was through the famous Chandi Chowk Bazaar, one of the busiest markets in New Delhi. 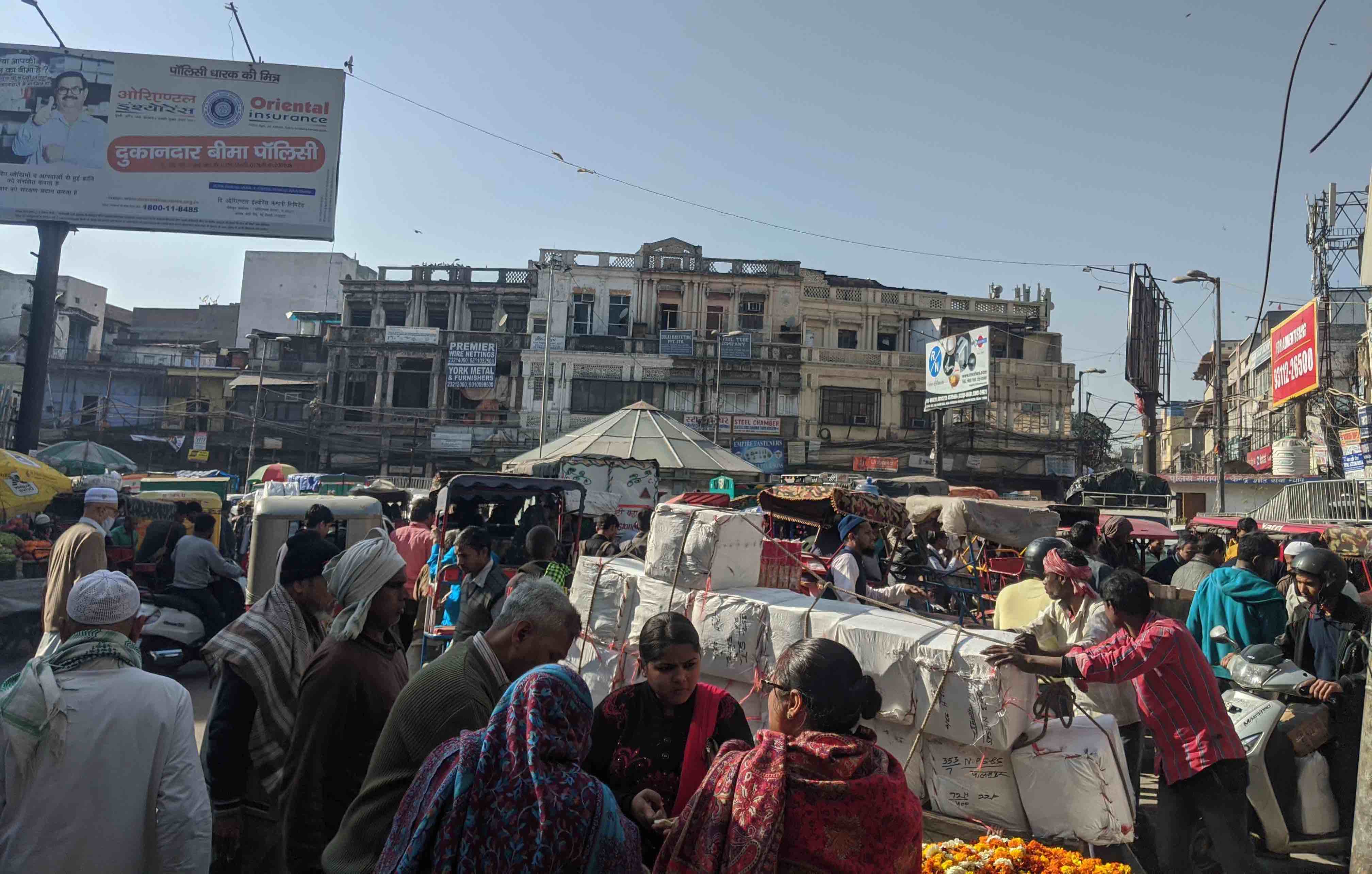 The Chandi Chowk Bazaar was chaotic, but it was also one of the most memorable experiences for me as I felt I was truly in India. It gave me an idea what the day-to-day life in New Delhi was like since it was mostly vendors and passers-by that contributed to the chaos, not tourists.

The Jama Masjid was the first architectural wonder I went to in my India trip, and I was flat-out amazed. 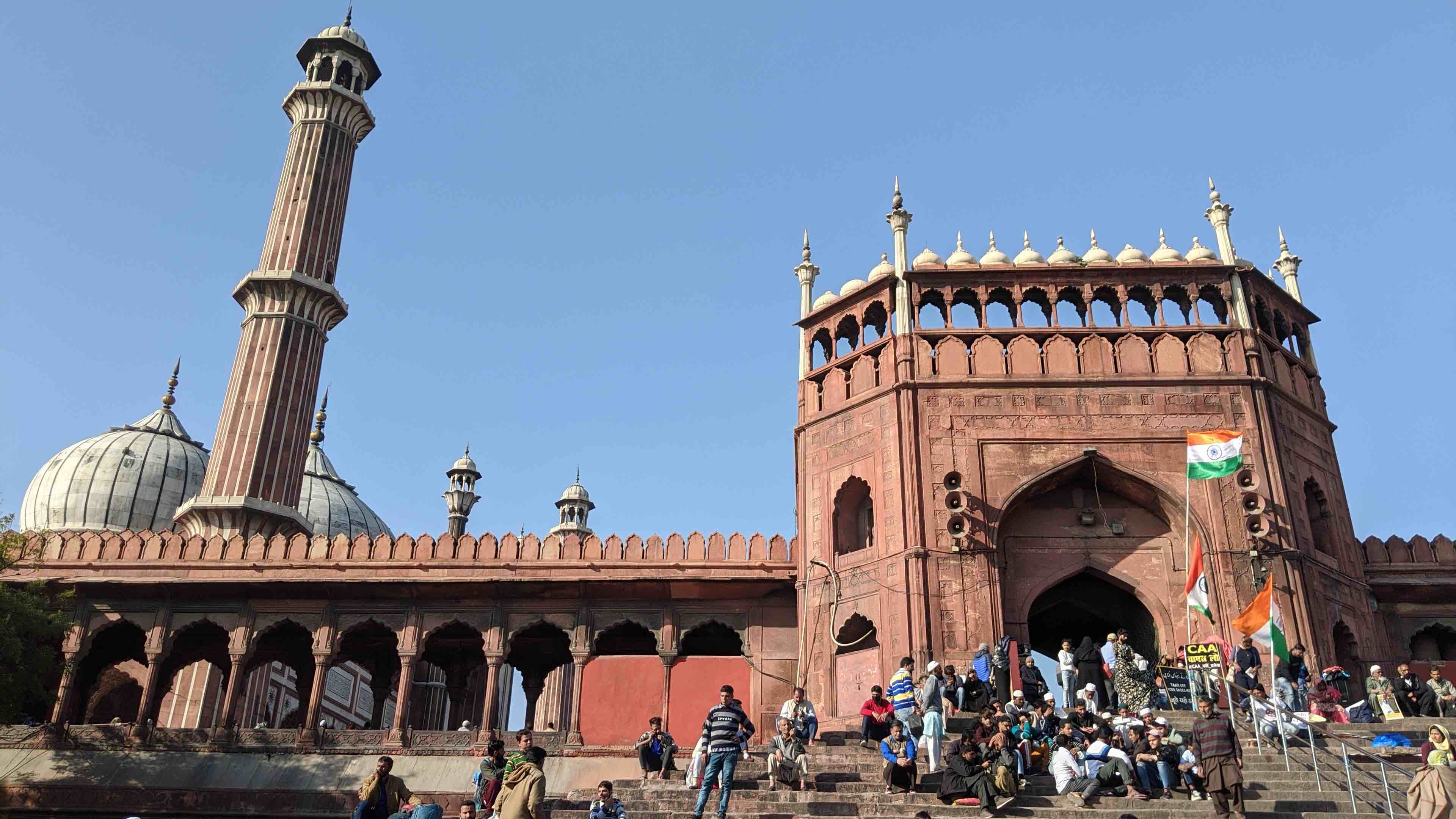 It was unlike anything I’ve been to in my prior trips, as it was the first grand mosque I’ve been to. It was really interesting to see people just hanging around in the courtyard, just chilling like it was any other normal day. 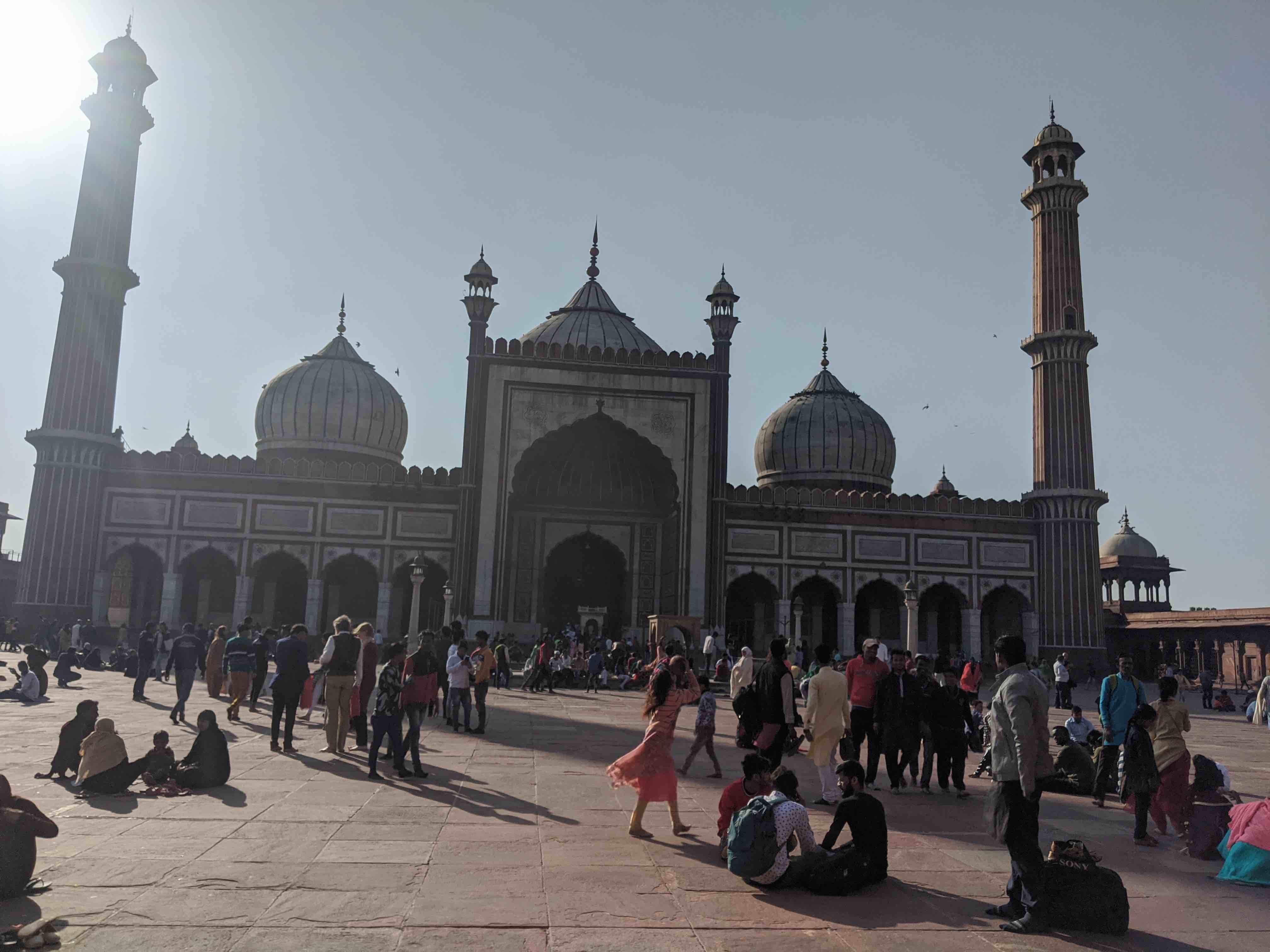 Just a tip: wear long pants when you go to any place of worship in India. Actually, just wear long pants all the time. Shorts aren’t very popular in India, and I didn’t see a single shorts-wearing local during my trip. 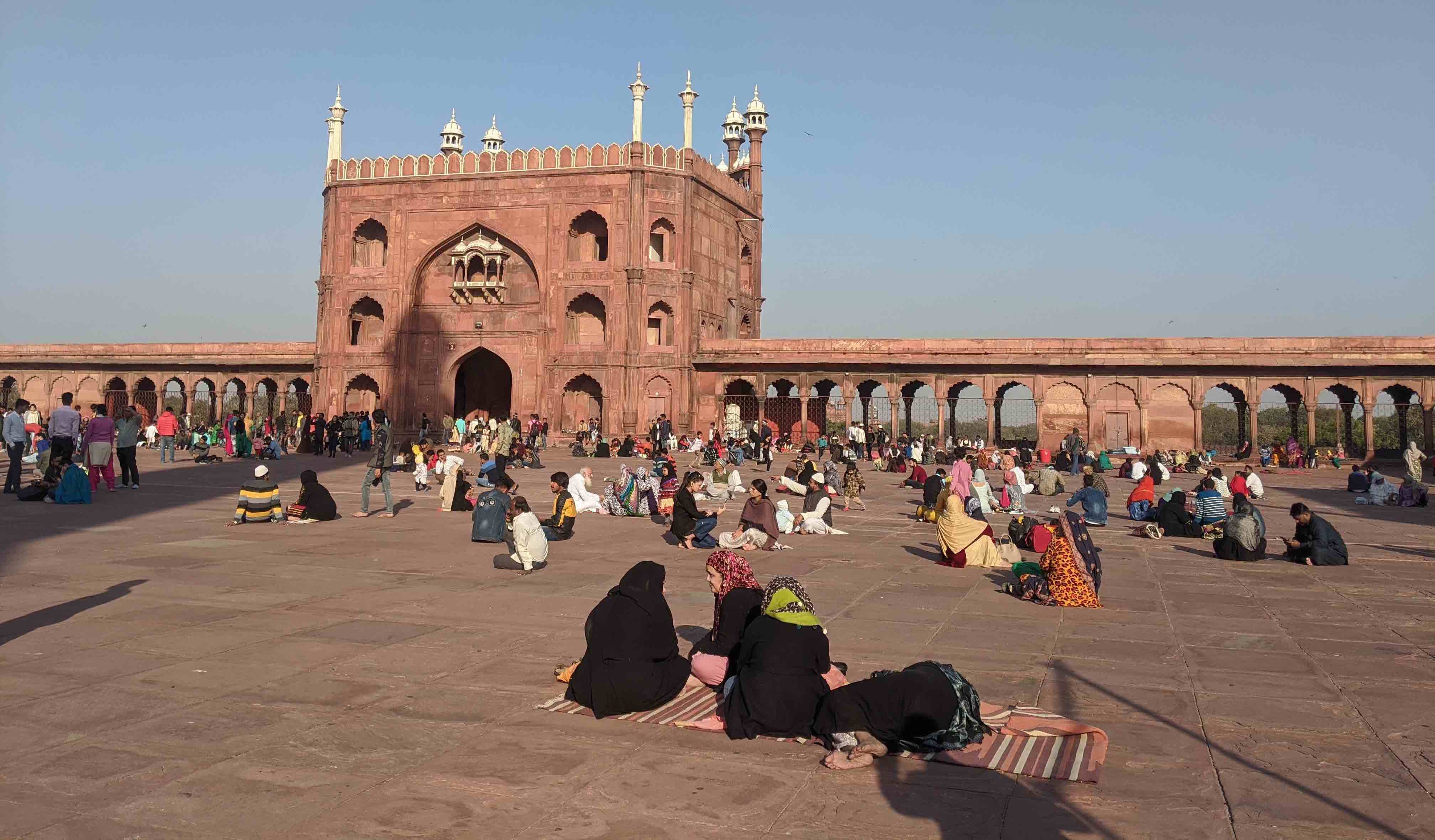 Since I was feeling stupid that day, I went out of my hotel wearing shorts, so I was forced to buy a cloth to cover my legs at the entrance of the Jama Masjid.

Another tip: You don’t need to leave your shoes outside the mosque and have someone guard them for you. You can just carry them yourself inside.

On my second day, I went a bit away from the city center to Humayun’s Tomb, the resting place of the Mughal emperor Humayun. 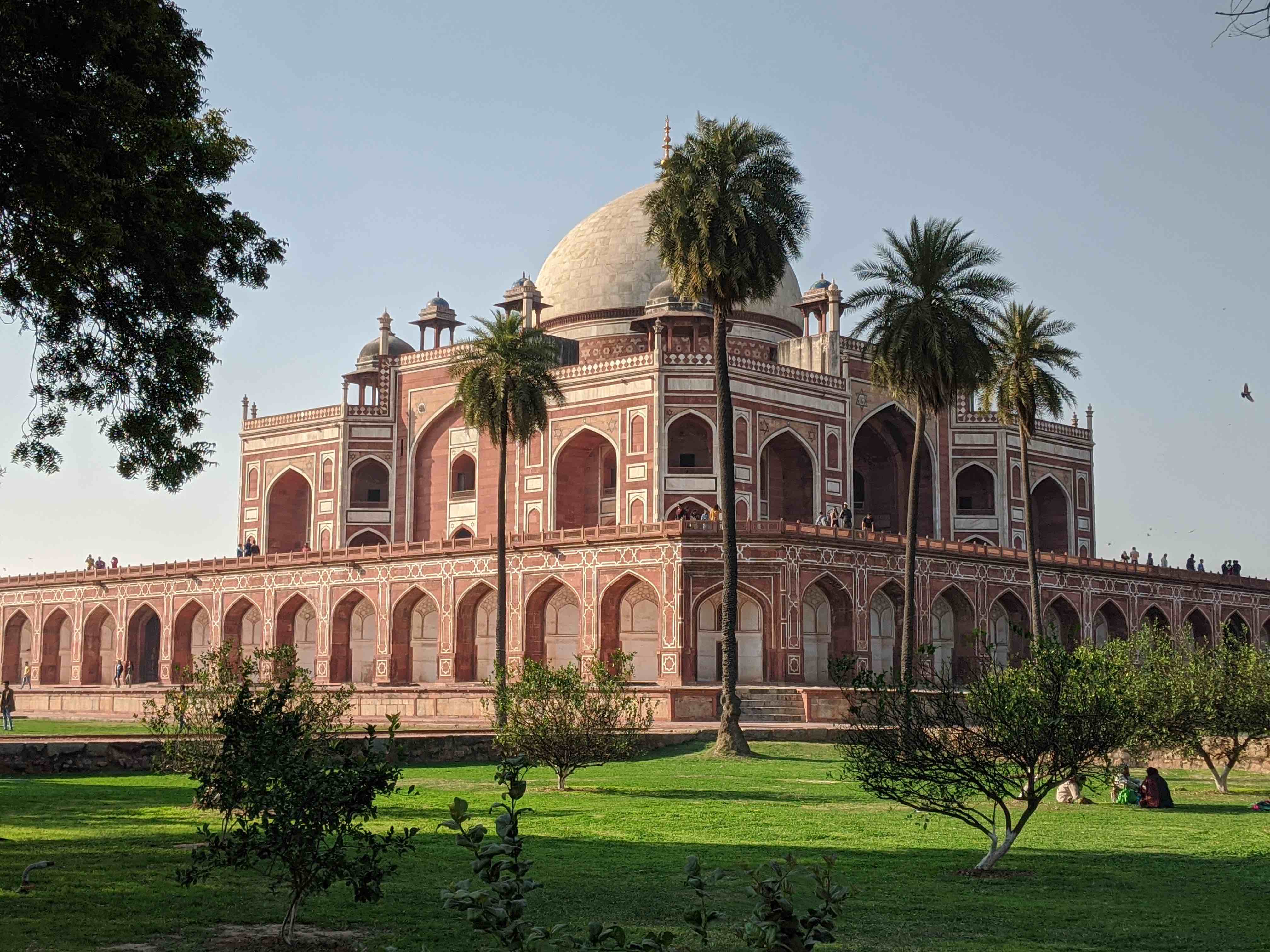 The entire space occupied by the tomb is large — it’s more like a complex, with smaller temples dotting the way leading to the majestic Humayun’s Tomb. The symmetry of the courtyard and the structure itself was amazing, and I spent an hour or so just admiring the place. 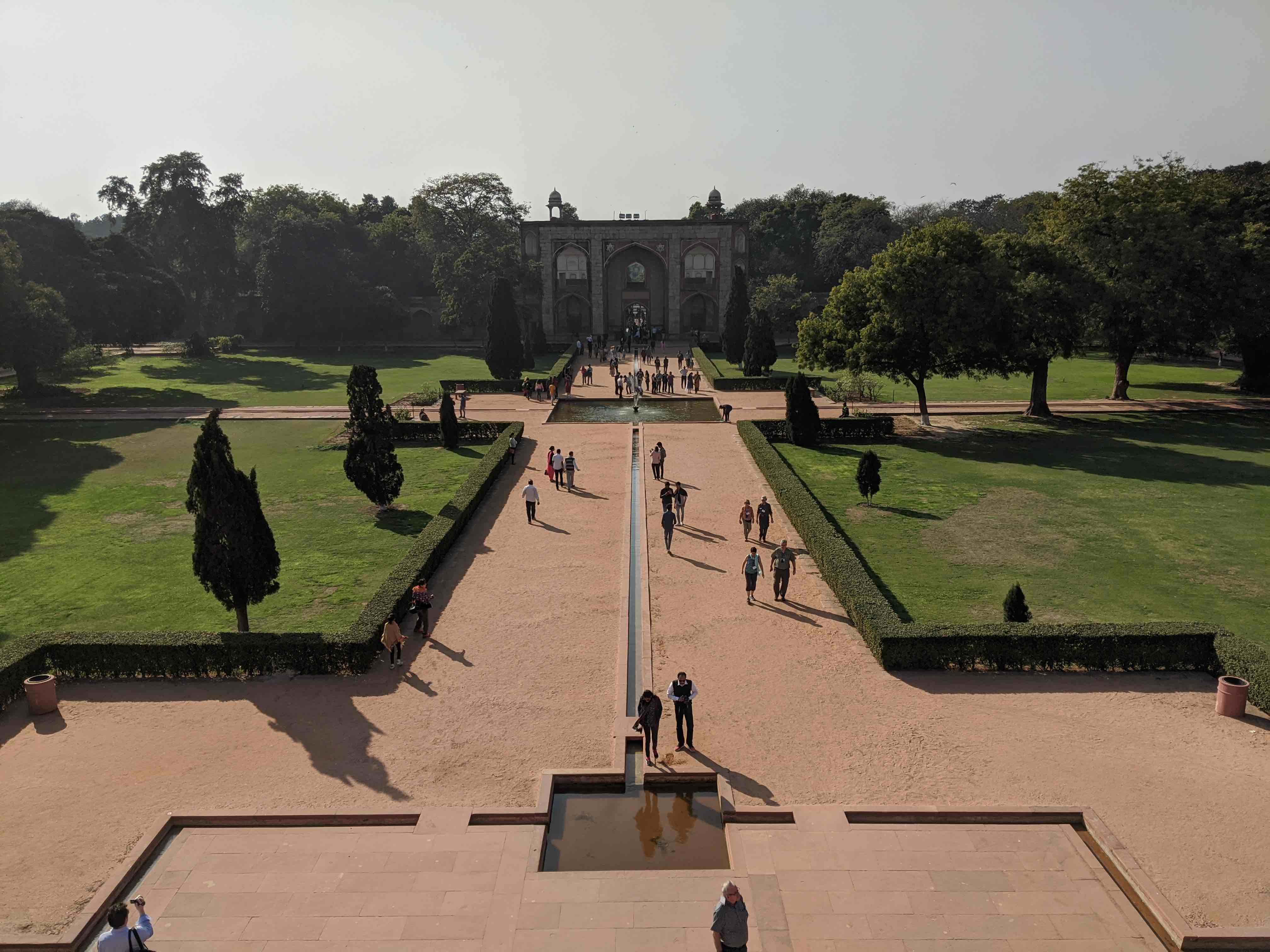 I went to New Delhi at the end of winter, and I was lucky to experience the chilly weather. I went to two parks in New Delhi just to chill out: Lodhi Gardens and Maanik Park.

Lodhi Gardens is located in a more upscale part of New Delhi. It’s about a 20-minute walk from the nearest metro station. 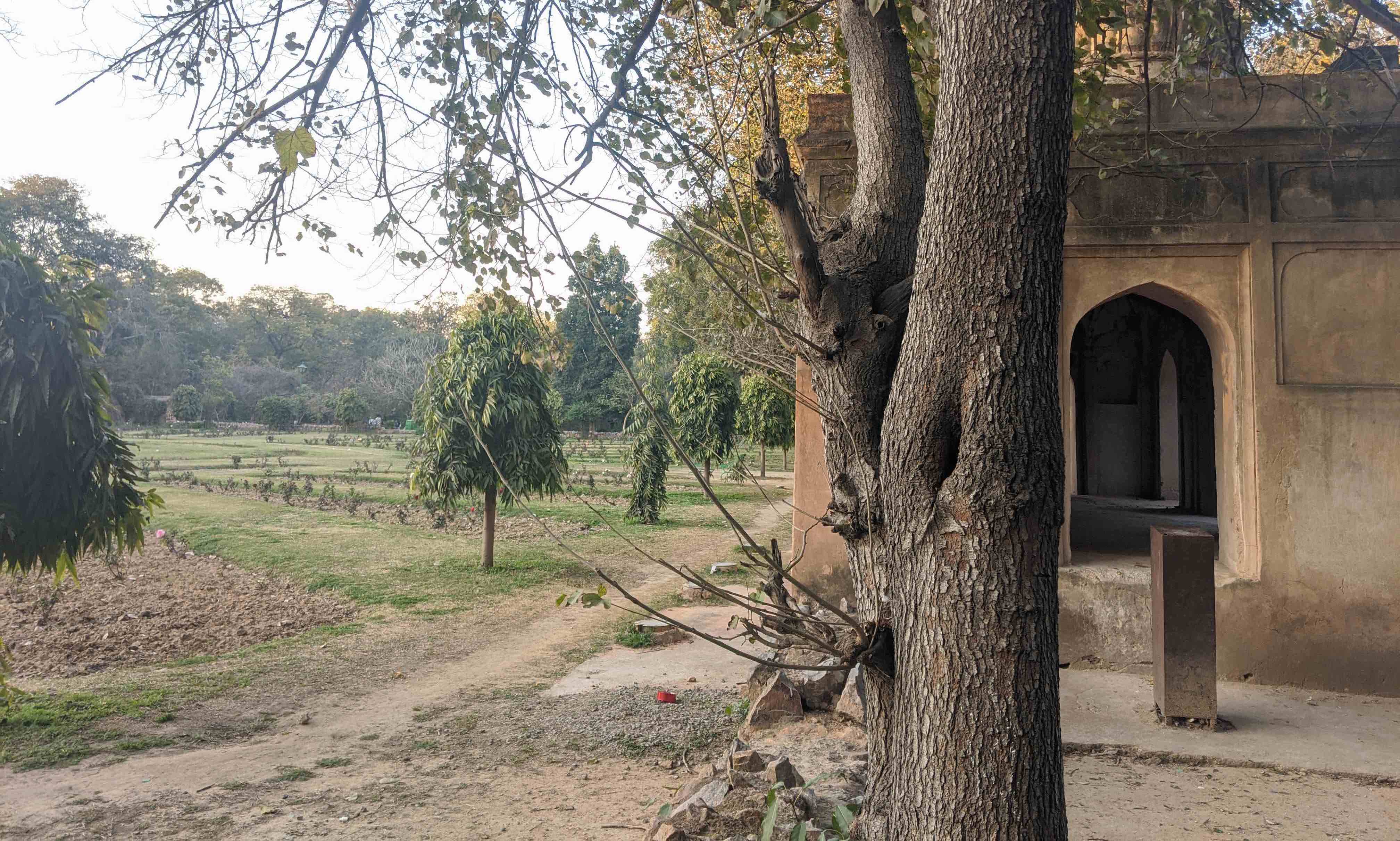 It’s apparently a very popular dating spot as half of the people I encountered there were couples. What’s super cool about Lodhi Gardens is that it’s also a historical location - home to a couple of tombs of important sultans. 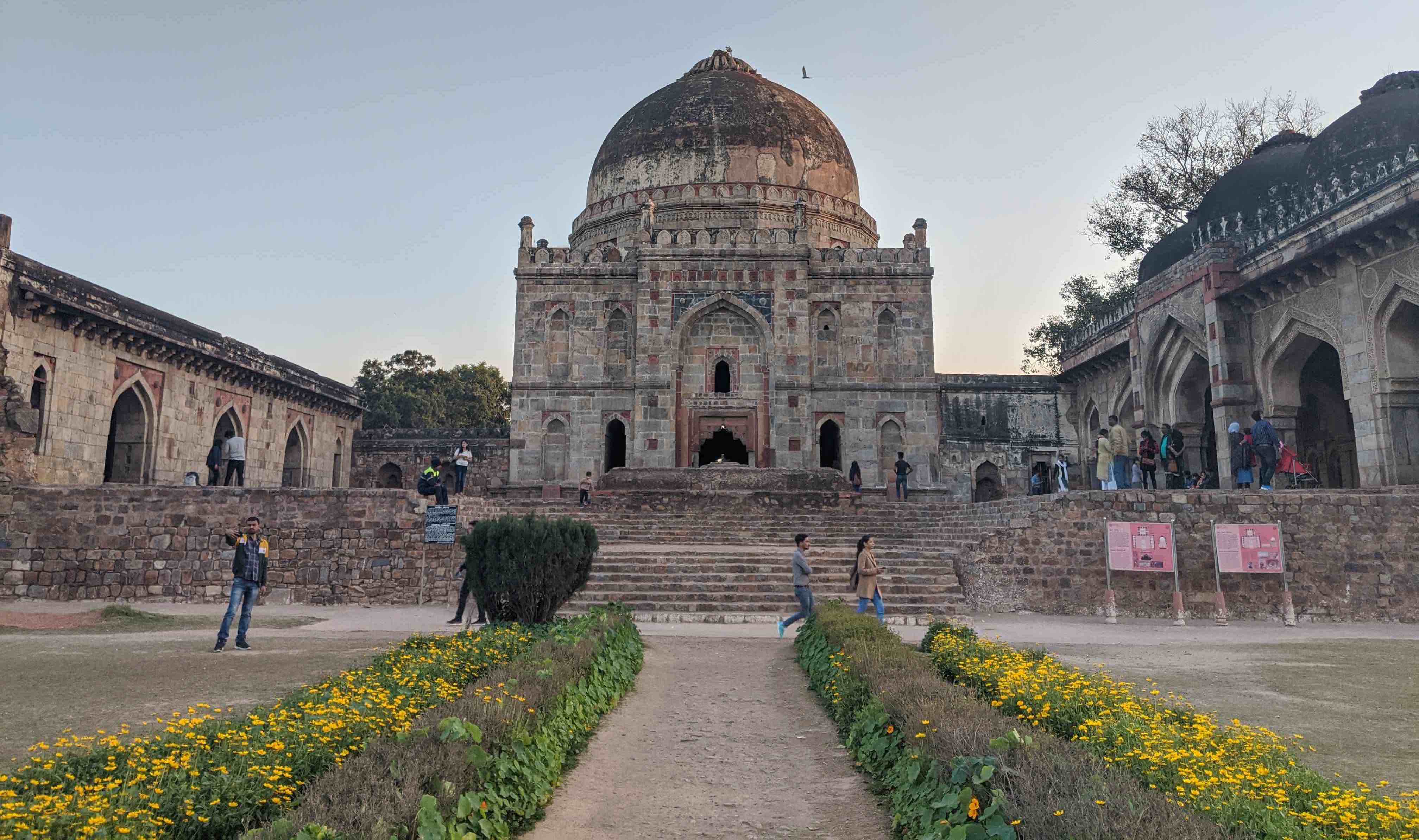 Maanik Park was an incidental discovery. I was on the way to the Lotus Temple and had to walk a bit of a distance since the rickshaw driver didn’t want to ride uphill. It was not a chore though as I walked through the wonderful Maanik Park, which had an amazing view of the city. 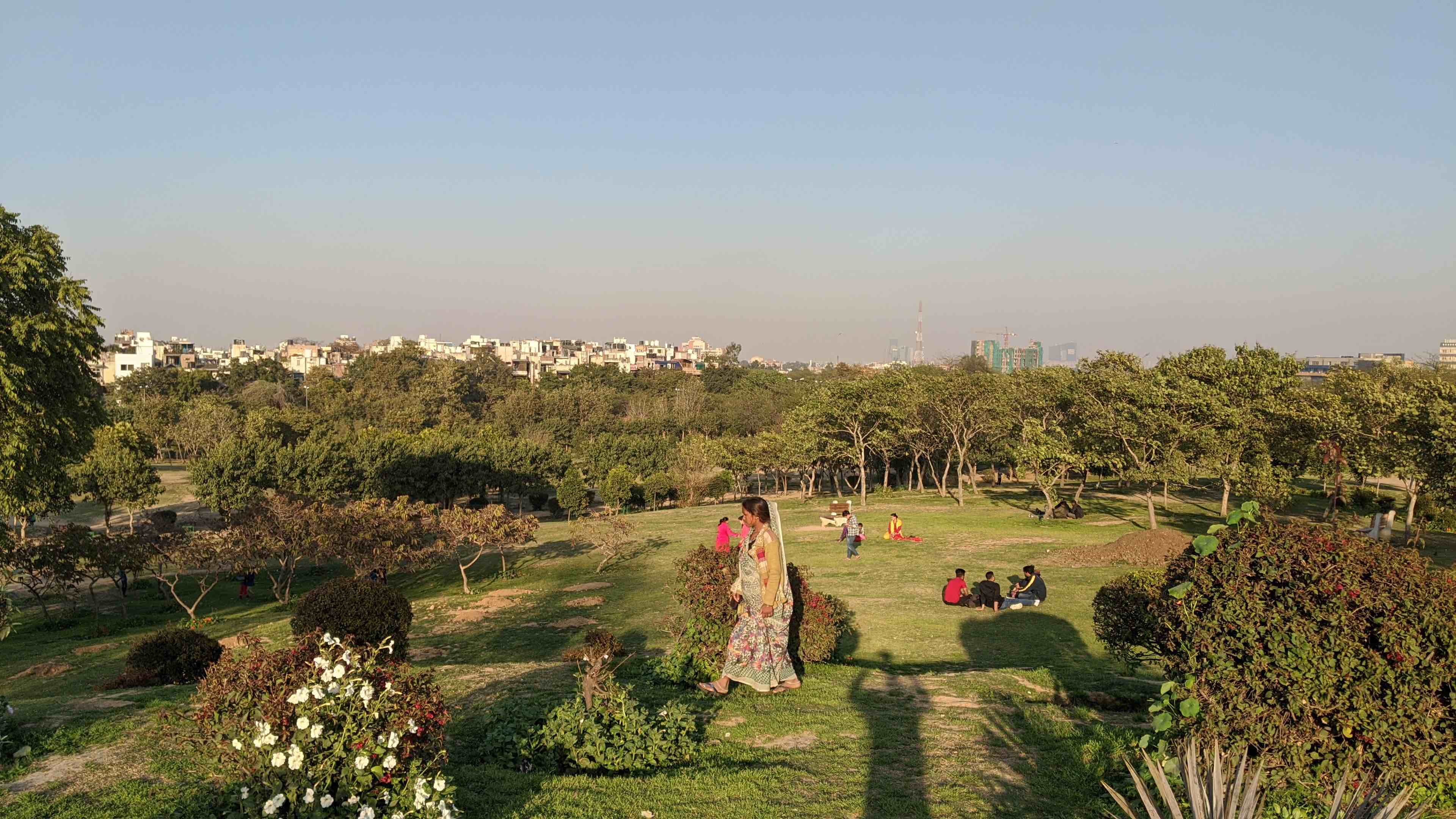 It seems to be very popular with locals, as there were lots of people having picnics and playing catch.

Eating Indian food is a no-brainer when you’re in India. And what better way to dine than eat a nice thali?

A thali is like an Indian buffet, where you’re served a plate with various small mini-plates having different dishes. Usually, thalis are served buffet-style so you can eat to your heart’s content. 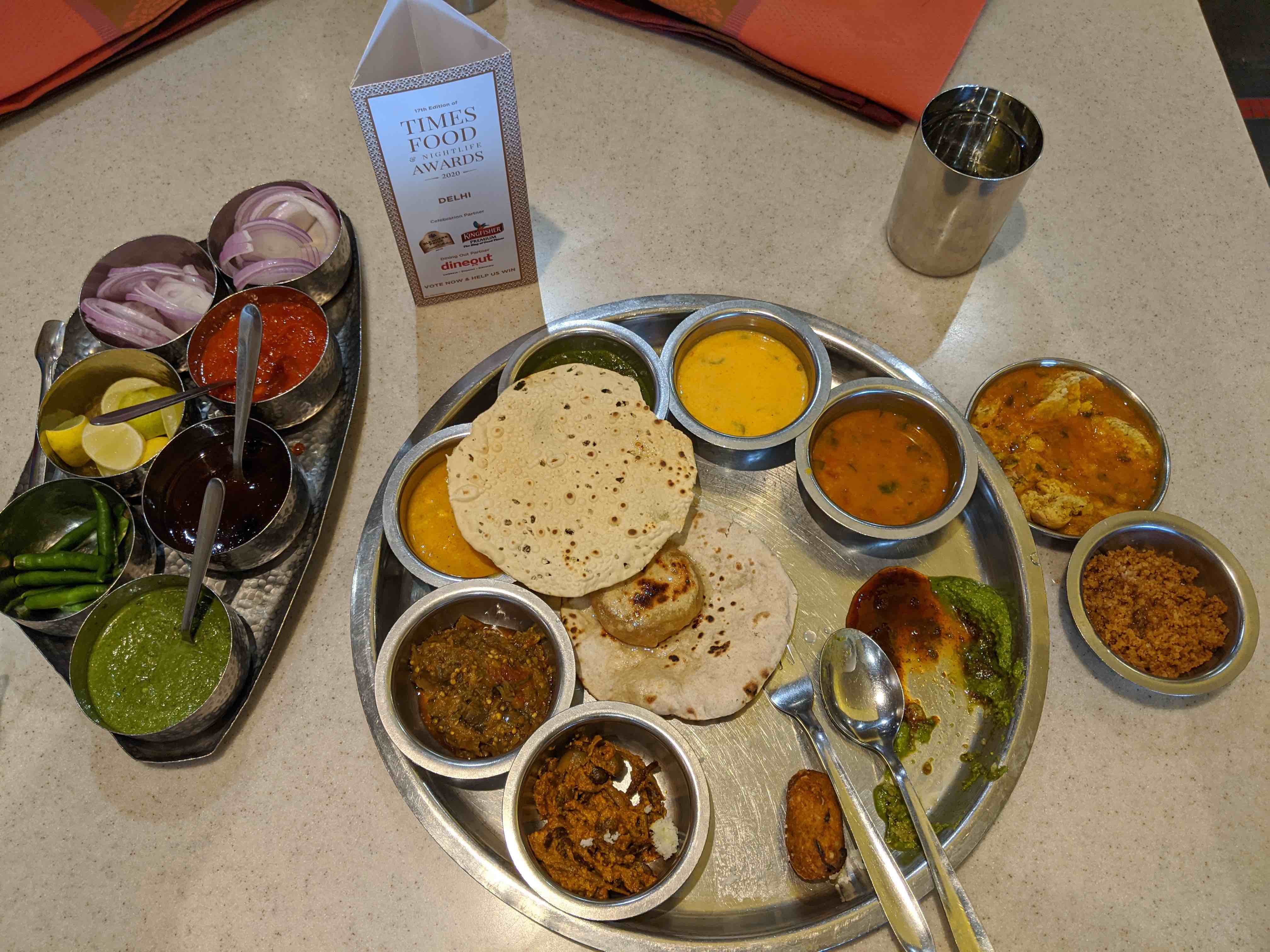 Googling the best thalis in New Delhi, I settled on eating at Suruchi Thali, a traditional Rajasthani outlet serving vegetarian thalis. It’s a bit on the pricey side, but I must say it was wonderful. It was funny though because the waiter was concerned since I was dripping in sweat. Indian food is quite spicy.

Have an Ayurvedic Massage

I love to get massages, and I didn’t want to pass up the opportunity to get an Ayurvedic massage, a South Indian style, while I was in India.

I had my massage at Auraveda Wellness Center.

My spa experience was a bit awkward, I admit. For the massage, I was asked to strip naked so that the masseur could fit a loincloth g-string on me, which was traditional massage attire. Wasn’t really prepared for that. 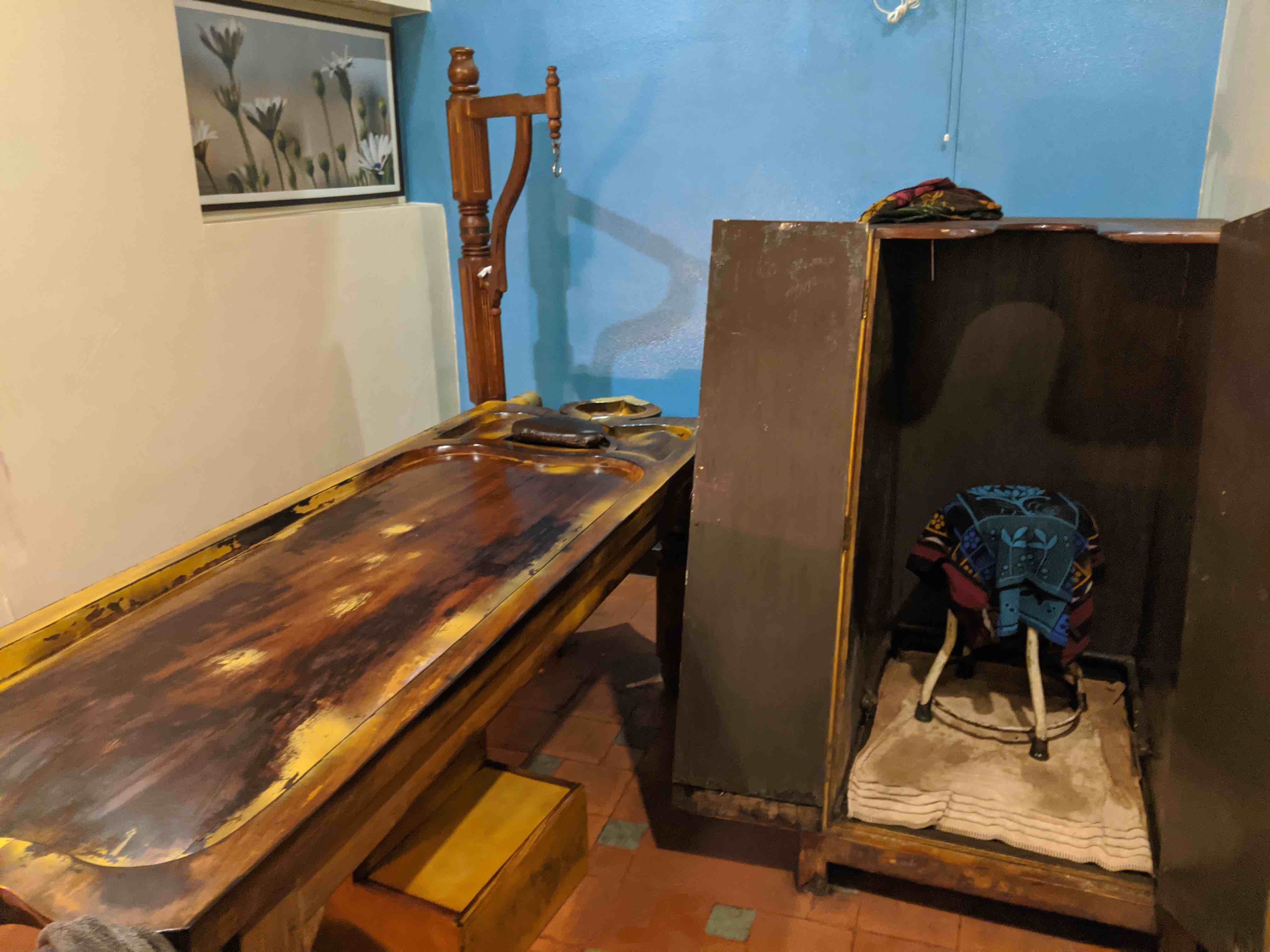 The massage was wonderful anyhow. Usual massages I’ve had were deep and slow, ala Thai, but the Ayurvedic massage focused more on fast strokes. After the massage, I was asked to sit inside a half-body steam chamber to sweat it out. It was very relaxing.

Though it was a bit on the expensive side, I think it’s an experience not to be missed.

I learned a bunch as a solo traveller in New Delhi. So I list down 7 tips here for prospective travellers.